In this week’s Undercover Barner, we revisit the football-induced tachycardia we all experienced this past Saturday and look forward to our Tigers’ next tall task: besting the Bayou Bengals of Red Stick.

A wise English teacher once told me that he believed we should only get ten exclamation points to use throughout our entire lives and that we had better use them wisely.

If Dr. Hannah had his way, I would have used my entire allotment Saturday night as C.J. Uzomah hauled in Nick Marshall's game-winning pass to all but seal Auburn's victory Mississippi State. I was a guest in the home of a very tactful MSU fan, and while I couldn't outwardly express the elation I felt, on the inside, my brain was stuck on caps lock and every phrase was an exclamation.

If you think I don't loathe celebrating simply not going 0-8 in the SEC with every fiber of my being, you are sorely mistaken. But there's no way the 2012 Tigers would have pulled off that win. As soon as the offense sputtered, they would've folded and sent Mullen home with a fair amount of job security. But Marshall led his men down the field like a general. He knew they were going to win, and he made it happen. We all know how I feel about baby steps. I'd be comfortable calling that one a baby leap.

Watching the game from behind enemy lines, which apparently is a thing I like to do, wasn't as bad as it sounds. Our host was beyond gracious, and it was a good reminder that #StateHate is kind of a misnomer. It's really #MullenHate. I genuinely like MSU fans, and I'll always have a place in my heart for ag schools. I am the Undercover Barner*, after all. But Dan Mullen is the worst kind of person, and I will never forgive him for his part in the Cam Newton Soap Opera Story To End All Stories The Barn Is Burning Cheater Cheater Pumpkin Eater Saga Of The Century Of The Millennium 2010**. Sorry, I'm not sorry.

It was suggested to me by a brilliant friend that we adopt #bestillmyheart as the official hashtag of the 2013 Auburn Tigers. I couldn't agree more. Not only are these guys apparently unconcerned with their affect on our cardiac well-being, but everything they accomplish makes my heart smile. Make it happen, guys.

So where do we go from here? Onward? Upward? Westward. To Baton Rouge, where a hungry LSU*** team awaits, eager to begin SEC play with a win under the lights at Tiger Stadium. Gulp.

Let's do some figuring:

We have a first-year quarterback who has been on campus for about two months with a cannon for an arm but not a lot of support from the receiving corps. We have a defense that can be described as inconsistent at best and porous at worst. We have a pretty solid run game, but MSU just put on a clinic on how to stop it in its tracks. Our special teams actually appear to have their heads on straight, but I don't trust kickers and I definitely don't trust punt/kickoff returners.****

And we're up against an LSU team that struggled with TCU but handily put a hurtin' on both UAB and Kent State. Truthfully, I don't know a lot about this LSU team, other than Zach Mettenberger's arm has been money so far. But the odds don't appear to be in our favor.

When I said "figuring," I didn't mean with stats and stuff. Journalism majors don't go to law school to do things with numbers. What I really meant was "let's look at our weaknesses compared to their strengths in a round about way."

And it's scary. Or it has the potential to be. But after three games, we're starting to get a sense of who these 2013 Auburn Tigers are. And if their tenacity thus far is any indication, this is how they're approaching Saturday's game: 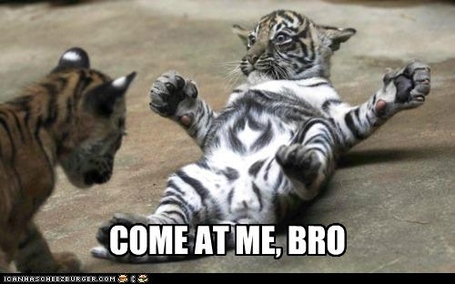 If this looks familiar, it's because I reuse amazing memes you're imagining things.

So bring it on.

Auburn may get blown out in its first SEC road test, as it has before. Or it may keep things close, preserving its Cardiac Kid reputation. Or it may shock the world and win the damn thing. Who can say?

One of the benefits of reaching the depths of our despair in 2012 as fans is how hard we are to rattle now. Honestly, Auburn has already reached its ENTIRE win total for 2012 in nine fewer games. We are half way to bowl eligibility. BOWL ELIGIBILITY. This game against LSU is going to be a hell of a mountain to climb. But can Auburn do it? ‘Tis possible, and that’s never something I would have said about last year’s Tigers.

Before I shamelessly direct you to the comment section to ask both for your predictions for this week’s game and for any and all funny things you have to say about Dan Mullen, I want to share a picture that I feel perfectly captures my cartoon thought bubble when I wear Alabama shirts.***** 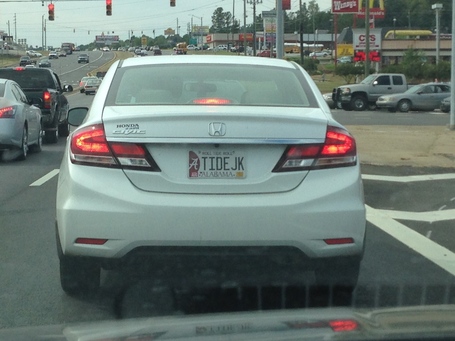 If you’re heading to Red Stick this weekend, please travel safely. Stop by and see the wonderful fellas over at And the Valley Shook and make it a personal goal never to turn down any food you’re offered while you're in Louisiana. I may or may not be living vicariously through all of you guys, so the food part is super important to me.

*I am the proud daughter of an Auburn Vet and the granddaughter of farmers who helped feed and clothe their families and communities. If you think Auburn’s or any other ag school’s ties to the Earth are a sign of weakness or intellectual inferiority, I hope you choke on your steak. You know, metaphorically.

***If you’re keeping score at home, my best friend/roommate is an LSU fan. It should come as no shock to anyone who knows or follows us on Twitter that we are both passionate and loud fans, and there’s no way in hell we can watch this game together. We are basically pretending this game isn’t even happening. We are going to watch it at separate locations and no one is going to speak of it after.

****No seriously, I can’t watch kickoff or punt returns. I’m exaggerating exactly 0 percent. I watch them like this, which is to say, not at all: 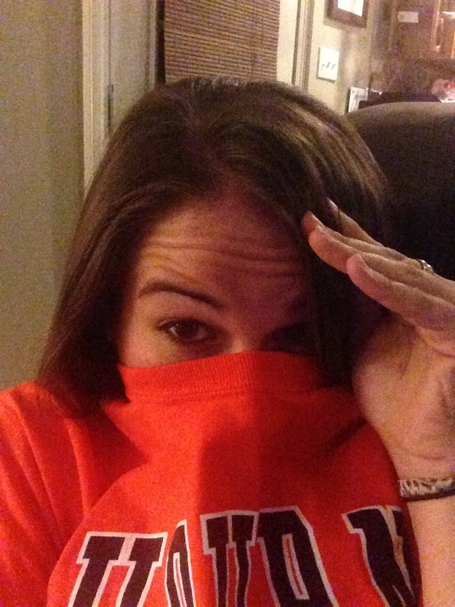 Incidentally, this is also how I watched the entire second half. Cardiac Kids.

*****Before you yell at me, I don’t wear 'Bama athletics shirts. But this is my alma mater (hopefully twice-over), and I’ll occasionally wear a plain ALABAMA or UA Law shirt. Don’t bite my head off about it.

******Even though there was another Game of the Century this past weekend, it was slim pickins in the Bammer lawl department. Perhaps the crazies we off in College Station. Or perhaps I ignored them. Probably the latter. I'll do better next week, for the home opener is Saturday.