Them Tigers Is Bad, Wet or Dry

The late, great Southern comedian Jerry Clower once heard a group of Auburn fans complaining after they lost to LSU in the driving rain in 1972, the only loss of the Amazins' season.  One Auburn fan said, "If it hadn't been raining we would have whupped them last year."  Clower responded, "y'all Auburn folks don't play LSU much but at Mississippi State we been playin' them for years handrunning and them Tigers is bad, wet or dry!"

Which brings us back to last year.  Auburn fell behind 21-0 early in the second quarter in a downpour.  Of the nearly 100,000 people present at kickoff, only 20,000 or so were around when Auburn's SEC Championship run began in the second half.  So what went wrong and what can we expect?

Having watched LSU for a few games this season, they are philosophically a similar offense to the one we saw last year.  Les Miles is an offensive coach who played at Michigan on the offensive line with his hand in the dirt.  His offense is offensive line and Michigan Man approved.  He wants to put a hat on a hat and beat you physically.  Let's look at the play that destroyed Auburn in the first half last year, an inside lead zone/isolation play: 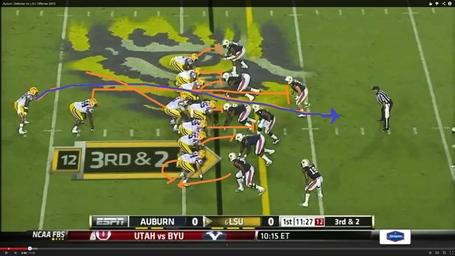 The offensive line gives a zone look but really this is an isolation play.  Guard and tackle double team at the point of attack, everyone else takes the man across from them.  Auburn's defensive tackle at the point of attack reads outside zone and fights himself out of position.  Fullback leads on Jake Holland and the tailback follows him to glory.  Let's look at this live:

Don't like this one?  Go to Warroomeagle's film collection of the game and take your pick of two other first half touchdowns just like it. Well, one other touchdown and a fifty yard run stopped miraculously at the one yard line.

LSU's passing game is simple, but effective.  Last year, Mettenberger had confidence in his two first round draft picks to make plays so he would throw into coverage and trust them to get the ball.  LSU will challenge weak corners deep and then tease them with hitch routes and quick screens when the corners deep.  Because LSU traditionally runs the ball so well, their play action passing game is very effective.  Here's a play-action pass from last year: 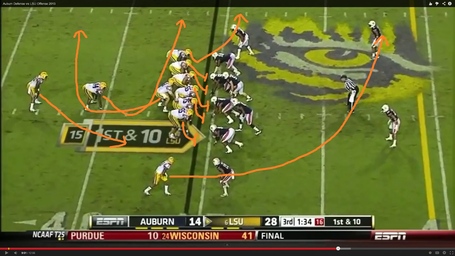 The offensive line shows run and executes an outside zone blocking scheme to the weakside.  The route is a classic flood pattern.  The fullback starts weak them pivots and runs a route to the top of the screen.  The tight end shows zone then reverses field to go into the flat.  The split end comes all the way across the field on a deep drag.  You can't see the receiver to the top side of the screen but he runs a 15 yard hitch pattern.  The quarterback makes his play fake then rolls into a naked bootleg.  He has some options but he's looking for the deep drag all the way.  Because Auburn's defense has been fed a steady diet of zone to this point in the evening, Auburn's defense chases the run action to the bottom of the screen.  Auburn doesn't have any defenders who can make LSU pay for the calculated risk of not bringing a lead blocker on the bootleg; i.e., a "naked" bootleg.  Here it is live:

Now, that we've seen what LSU has traditionally done and what they like to do, let's look at what's different about the 2014 LSU offense.  Just about everything but the playbook.  That entire backfield is gone.  Quarterback and tailback were drafted along with two nightmarish receivers.  Their mansome and talented fullback, J.C. Copeland, is also gone.  They lost a couple of linemen to boot.

LSU has struggled in their early games this year as they try to find the right personnel to replace all the departed talent.  They came one step closer to figuring everything out this week when they decided to start Brandon Harris at quarterback.  So far this season he has completed almost 75% of his passes and run for over 100 yards in spot duty.  To complement their new found mobile death-machine of a quarterback (not to be confused with Jamarcus Russell who was a Mobile death-machine of a quarterback), LSU has added some plays to their playbook that will look familiar to Auburn fans.

He's 6'2" 185 but he runs stronger.  He can also throw the ball as seen in this impressive drive late in the Miss State game:

So what do we expect out of Auburn?  In the words of Muhammad Ali, you're gonna see all your eyes will allow you to see.  Auburn's going to want to confuse the freshman who, while undeniably talented, is still a true freshman making his first career start in a hostile environment.  Look for Auburn to show all out blitzes and drop into soft coverage, or run delay blitzes with Ford or Therezie off the corner to try to catch Harris by surprise.  He's seen it on film, he's done the reps in practice.  But there's something about your first road start that's always especially difficult.

How well will we do?  A lot depends on how healthy Frost and McKinzy are.  Swain is experienced.  Tre Williams is incredibly talented and plays angry (he reminds me a lot of Tray Blackmon "The Little Ball of Hate" due to his size and aggression).  Javiere Mitchell is very athletic.  But mentally none of these guys are where Frost and McKinzy are yet.  They just don't have the same level of experience.  As Coach Melvin Smith pointed out after the game last week, Auburn gave up a long run in the second half when two freshmen linebackers tried to audible to fix something that wasn't a problem but became a problem.  They also aren't as physically big as Frost and McKinzy, something that may matter against a strong, physical LSU team.

Before last week had you asked me about Auburn's chances, I would have told you this was not one to worry too much about.  They had the potential to beat us but I didn't think it was likely.  This was a team to be grouped with the South Carolinas of the remaining teams rather than the Alabamas and Texas A&Ms.  With talented freshmen in Auburn's linebacking corps facing off against a talented freshman quarterback, worry.

It's basically going to be a random number generator sort of night where Harris will alternate between looking like an All-American and the prom king and Auburn's linebackers do the same.  Who comes out on top?  I'm leaning towards Auburn because I think we have more experience and talent on the line and secondary.  If Harris is able to throw on us, he's going to be throwing into coverage.  Maybe he can make plays maybe he won't but it won't be easy.  Also, when your linebackers mess up, there's a chance your defense will make a play anyway.  When your quarterback messes up, it's going to be noticeable.  (Plus, our offense gets to run against an anemic LSU rush defense which will bail out our defense if they need bailing out.)

TL;DR? I have no clue what's going to happen but take the over whatever it is.

As a bonus, would you like to see the exact moment Auburn transformed into a championship caliber team last year?  First play of the second half against LSU: