Basketball coach Bruce Pearl hosted a private pep rally with the students on Thursday night, and plenty of them turned up for him. Clint Richardson was there and has this to say about it...

There's a new atmosphere in Auburn.

Auburn Arena that is.

The first official basketball event of the year was as loud and enjoyable as anyone could imagine with a man like Bruce Pearl involved. Doors opened at 6:30, but even before the clock hit 6:00, there was already an impressive line. The entire student section, as well as the soft-backed scholarship seats, were filled by the time the show started just after 7:00. Food, basketball, and Bruce Pearl. Just over 2,000 students excited for a new change. It's coming.

We got to watch a good 30 minutes of practice as we ate some Momma Goldberg's mini sandwiches. Bruce Pearl actually put on a mic for a while during practice. After about ten minutes after practice, the team managers, coaches, and players were announced. The players ran around the perimeter of the court greeting students in the stands, Tiger Walk style. Then Bruce.

Yes, Bruce Pearl walked out dressed up as Gus Malzahn. It was Halloween Eve after all. He even gave a nice, loud "BOOM!" After a quick speech about how the team still needs to work on a few things and such, the results of the student section name vote was revealed. Spoiler: it isn't anything new. Bruce and Aubie both sported the new "Fear the Jungle" shirts. And hey, they have a cool new feature! 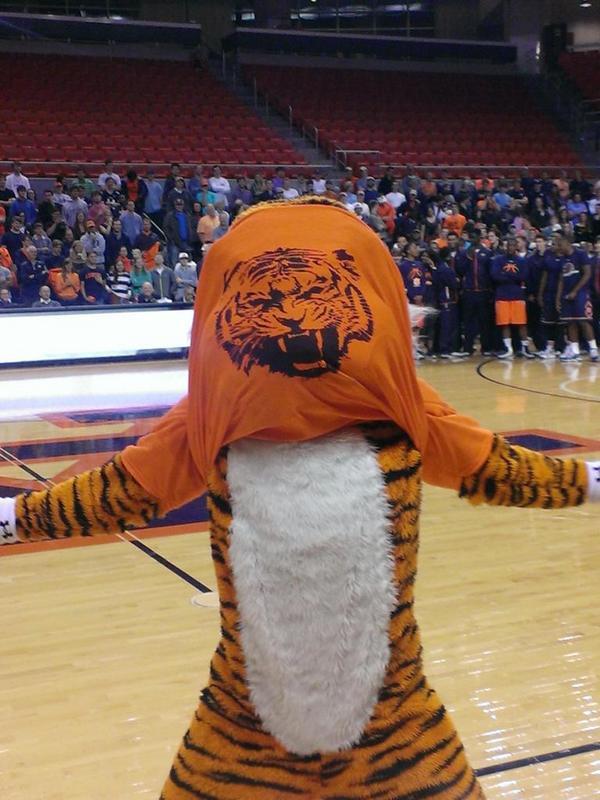 The next part of the night featured cheer training. Seriously. We spent a good 45 minutes just going over cheers. And it was good. With the cheerleaders and pep band, we got the Arena the loudest I have ever heard it. We've had nearly full crowds for Alabama and Kentucky games, but only a full student crowd was so much louder than any of that. It certainly helps to have someone like Bruce Pearl encourage every single person to be as loud as they can. Then the Orange Jump Suit Guys and the group of guys that paint up for the football games came out to go over some more cheers. We even had to toss out an idea - one in which everyone would take out their phones and turn on the most annoying alarm sound they can find. Yea, it was bad.

One of the coolest parts of the night was when Bruce called his players, coaches, and staff to line the AU at mid-court. Then he invited every student in attendance to do the same. We had a true team photo taken. Heck, we even had a Bruce Pearl mosh-pit. That's quickly becoming a thing.

Auburn Family is ready for some basketball! #WarEagle #PearlJam pic.twitter.com/etjrz2YNW9

And the student body has embraced Bruce Pearl.

A relationship between coach, students, and team has just begun. I hope you'll join me and the rest of the true Auburn Men's Basketball fans along for the ride.

Coming soon - a student viewpoint of the basketball program from the front row seats in the Jungle. If you liked this piece and would like to see more written by myself, please visit my uniform site, the Auburn Uniform Database. No detail is too small. You just might learn a thing or two about the uniforms the Auburn athletic teams wear.