There are many reasons to dislike the 10-second substitution rule. Here are a few from an Auburn fan's perspective.

Share All sharing options for: The proposed 10-second substitution rule is dumb

Mike Leach called the rule "mind numbingly dumb" and then laid down several reasons not to like the proposed 10-second substitution rule (audio here). Here are few reasons of my own:

BERT is behind it (and Saban behind him)

Bret Bielema has been on this soapbox since last year's SEC Media Days. Nick Saban was questioning what we wanted football to be back in October of 2012. And both were apparently attendees at the Football Rules Committee meeting. What exactly they were doing there is unclear since neither has a vote, but it's dirty and I don't like it.

10 seconds is not a solution, it's a poor compromise

Drivers on the road use a 2-second rule, basketball centers must follow the 3-second rule and you can eat dropped food if you subscribe to the 5-second rule, but 10 seconds to make substitutions makes no sense.

At least Bielema was bold enough to originally campaign for 15 seconds. That would actually be plenty of time for the defense to make substitutions (except for Tennessee). It would also cut deep into the pace of typical HUNH teams like he wants. What he got was some sort of compromise. The NCAA rules committee can argue that this somehow protects players, but also rarely affects how teams currently play.

To see what effect 10 seconds might have, a few writers have looked back at some Auburn games to see how many times the Tigers actually managed to beat this 10 second window. Brandon Marcello tweeted that Auburn would have been penalized twice in the BCSNCG. Barrett Salee wrote that Auburn's "warp speed" plays in the Iron Bowl fell outside the required 10 seconds.

I re-watched Auburn's offense against Arkansas and Bielema himself. Below is the time on the play clock for each play of the first eight drives.

Auburn would have been penalized twice in this game for snapping before 29 seconds were left on the play clock. So maybe that's not often enough to warrant a complaint from HUNH coaches. If only a few plays per game start under 10 seconds, then offenses having to wait an extra second or two before two or three snaps per game shouldn't make a big difference.

Another counter is that it's not the snap of the ball under 10 seconds that affects the defense. It's the threat. Auburn was set and ready to snap the ball with thirty or more seconds on the play clock six times. On the third play of the third drive, Auburn was ready to snap at 30 seconds, but snapped the ball at 9 seconds. So it wasn't the time of the actual snap that prevented any substitutions. It was the threat of the snap.

It may be that teams rarely snap the ball quickly enough to earn a penalty under the proposed rule, but it is the threat of the snap that is the real advantage.

No studies show that more plays lead to more injuries

So far, the rule hasn't been presented as a way to increase sportsmanship or offensive/defensive balance. It has been presented as a way to limit injuries. That's a noble cause, and limiting injuries will be necessary in this era of head trauma awareness. But this rule change does not stem from any research or study linking pace and injury. It apparently only comes from common sense, per NCAA coordinator of officials Rogers Redding. I'm sorry, but you can't make serious decisions about people's health using only common sense.

Unfortunately, common sense is all that's available. There have been no studies that support or discredit the claim that more consecutive plays lead to more injuries. But plays per game is a simple stat. And Phil Steele published "starts lost due to injury" for the 2012 season. So Dave Bartoo and myself independently took these numbers and formed some conclusions. 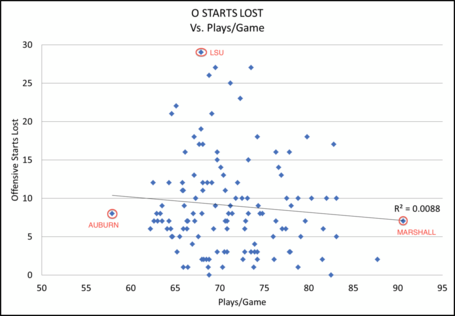 Counting only runs and passes in the plays per game count, Auburn's offense had the fewest plays per game of any team in 2012. What a change 2013 should be. Marshall ran the most plays per game. A couple teams lost no offensive starters during the season, but LSU lost the most. Regardless, the scatter plot seems to show no correlation between number of plays per game and number of offensive starts lost. An r-squared value of 1.0 would mean there is a perfect correlation and an r-squared value of 0.0 means the plot is completely random. Which number is this r-value closer to? 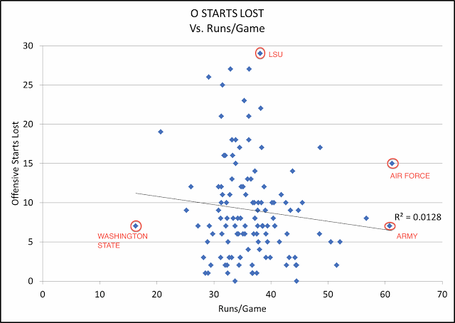 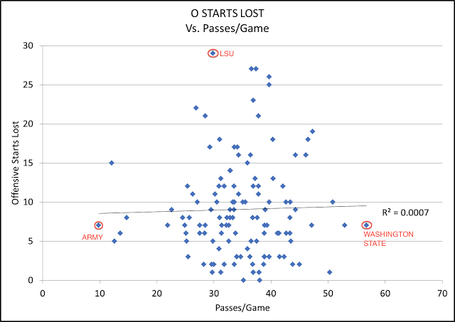 Maybe a team that runs more often is more at risk? Maybe a passing-crazed team puts their players in harm's way? Well, not really. Both of these plots look mostly the same as the total plays per game version. The r-value of the runs per game plot is a touch stronger, but in favor of faster play. The r-value for the passes per game plot is laughably small. These graphs have convinced me that, at least in 2012, plays per game had no affect on offensive injuries. 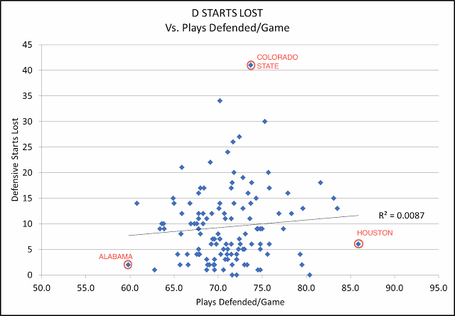 What about the pace a defense faces? That seems to be what Saban and Bielema are most concerned about. In 2012, Alabama defended the fewest runs and passes per game, while Houston defended the most. A few teams lost no starts on defense, but Colorado State's defense suffered the worst of the injuries. Though the trend line shows an increase in injuries with an increase in plays per game, the r-value is still miniscule. 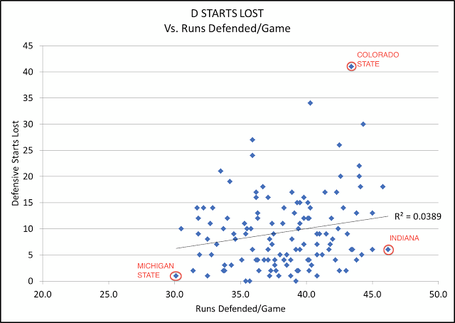 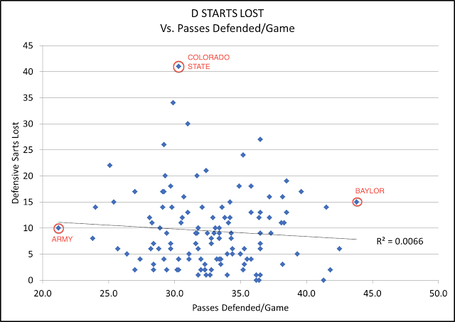 The best case for pace causing injuries comes from the runs defended per game plot. Compared to the other graphs, at least you can see a trend. But again, the r-value is too small for this to matter much. Also, I can't prove this, but which teams must defend the most runs? The teams that spend the most time behind. If your team is losing, your opponent is going to be running the ball over and over to kill the clock. Could the teams that lost starters early in the season be more likely to lose games and therefore see more runs? Could teams that are as mismatched talent-wise also be more likely to be injured?

A few disclaimers. For one thing, I'm no statistician, so I could be making terrible assumptions with this data. But I do have a bit of common sense and some basic math skills, so at least the plots are based in actual data. Second, Phil Steele only counted injuries that resulted in a lost start and if a player was out for multiple games, then one injury counted as multiple lost starts. It's not the best tabulation for this purpose, but it shouldn't be completely useless either.

If the NCAA was serious about reducing injuries, maybe it would further regulate practices or impose playing weight limits. At least there is evidence backing up those proposals.

These are certainly problems for defensive coaches, but there are countless examples of offensive and defensive innovations over this sport's history, and they were all answers to similar problems. Coaches who play against HUNH teams need to find those answers. The answer is not changing the rulebook.