Continuing the list of top ten Auburn games Walt has attended with particular meaning to him.

I know. You're looking at the title and screaming "The South Florida game!?!? How does that make your top ten list!?!?" Well it does, and I'll get to why. Let's first give a very brief recap of the game itself.

Auburn was coming off a first week victory over Kansas State (in the first part of the home-and-home that we're finally returning this season) that was a lot closer than the final score indicated. This was due to a Quentin Groves sack causing a fumble return for a TD by Antonio Coleman in the last minute of the game. Auburn was actually trailing late in the 4th Quarter of that game. South Florida had beaten FCS Elon 28-13 in their opening game of the week. There was every reason for the Tigers to feel comfortable. Especially with Brandon Cox now in his third year under center.

What actually happened was a disaster. Poor kickoff coverage in the worst moments led to USF being able to send the game into overtime, where they won on a TD during their half of the first OT after Auburn had only converted a field goal. This game gave us flashes of brilliance from freshman running back Mario Fannin and also flashes of the fumbilitis that would plague Fannin for much of his career. It is unfortunate that the brilliant Super Mario Fannin video produced by TheAuburner following this game has been lost in the bowels of the internet and personal computer hardware failure. Someone made a video with a similar premise for the 2009 WVU game, but TheAuburner's was complete with "shrinking Mario" sounds for the fumbles.

So why is this game on my list? Well, this is a picture of me just a few shorts weeks before: 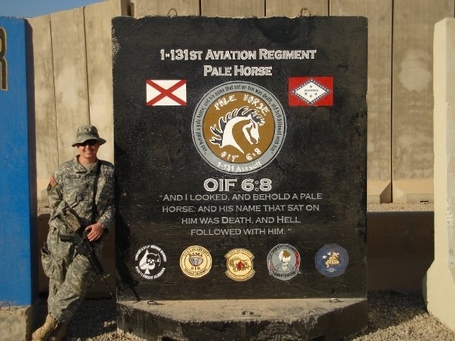 I was still technically on active duty orders during the South Florida game, but on Terminal Leave. I arrived back in the United States on the 21st of August from a deployment that had last nineteen months. Seven months at Ft. Hood and Ft. Sill for mobilization, and then twelve months in theater. My brother and I got tickets to this game months prior and I looked forward to returning to Auburn after this long deployment. Ninenteen months is a long time to spend away from home. Granted, I had around three weeks home during that time on leave, but leave is not the same as "home." The USF game was one of the things I needed most to truly make myself finally settle back in and relax and enjoy one of the things I love most in the world in the place I love most.

USF ruined the day a bit, but it was still worth it. I'm sure many of you have spent a long time away from Auburn and then returned and know the general feeling I'm talking about. To be able to see Tiger Walk, just walk the grounds, watch the pre-game eagle flight and the pre-game show by one of the greatest college football marching bands, and just experience Auburn again after the deployment was unbelievably relaxing. It was a good game, too. I would have preferred an Auburn victory, but it was an exciting football game.

Sometimes the outcome on the field doesn't matter. Of course I wanted Auburn to win, but that day wasn't entirely about football. It was about coming home.

From here on in the list will start making a bit more sense to most of you and will be games we all remember. So what's #8 on your list? What feelings do you get when you return to the Loveliest Village after a long absence?