Why Nick Saban Needs This Guy to Fail

Share All sharing options for: Why Nick Saban Needs This Guy to Fail 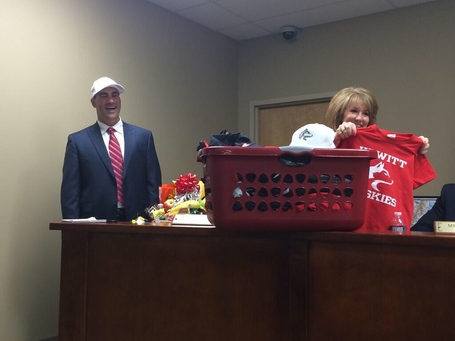 Meet Josh Floyd, the new coach of Hewitt High School in Trussville, Alabama.  Trussville is an affluent suburb on the northeastern side of Birmingham.  Hewitt Trussville is a school known for great QB's like Jeff Rutledge, Jay Barker, Brandon Cox, and Jason Standride (who signed with Auburn, but elected to play baseball).

So right now I am sure you are thinking, "Why am I reading a piece about a new coach in an Alabama suburb?"

Josh Floyd isn't just any new coach.  He was essentially hand picked for this job by Gus Malzahn for the Trussville City School system.

As the story goes two Trussville residents approached Gus at a coaching carousel event a few months back.  They asked him if he had any recommendations for a football coach.   Gus called back the next day with Floyd's name and number.

Floyd played for Gus at Shiloh Christian.  After some coaxing, he left his Alma mater where he had already won four state titles to come to Alabama.

During Coach Floyd’s 10-year career at Shiloh, he has compiled a 99-29-1 record, including four state championships and one runner-up finish. During a run from 2006-2010, Shiloh was the state’s most winningest program. In 2009, Shiloh finished ranked No. 1 in all classifications in the Arkansas Democrat Gazette Poll while also attaining a No. 24 national ranking in USA Today.

Needless to say, the guy can coach.  So why is this important to Auburn and Alabama?

Floyd is the first true Malzahn disciple to coach high school football in Alabama.  If and when he succeeds at Hewitt, look for this style to spread like wildfire in the state.  Look for more of the blue chip athletes in Alabama to be more familiar and more excited about the hurry up no huddle, and look for Auburn's already stellar recruiting to gain even more traction.

This will be a new challenge for Floyd, playing in the toughest region in Alabama's new 7A which contains powerhouse Hoover.  The schedule will be tough and after starting the job in June, there will be a pretty steep learning curve.

You can better your bottom dollar that a certain dark lord of the sith over in Tuscaloosa will be pulling against Coach Floyd and Hewitt Trussville.

Saban has already asked publicly "Is this the way we want football to be?"  If Coach Floyd is successful, then this may be the way football becomes all over the south.

I for one am pretty excited about it.