Share All sharing options for: An Intro to Auburn's 4-2-5

An introduction to me and why I'm here.  My name is Tuco and I'm a lawyer in the Magic City.  I'm a long-time EDSBS commenter and have been on the C&M boards for about a year.  Before I was a lawyer, I coached football.  Most of my experience came during my long and ignominious college academic career.  I volunteered with the local little league, helped out at the local high school, and spent a year helping to break down film of the opposing passing game at Auburn.  I gave up that dream to pursue being a lawyer because I wanted a more stable, predictable future for my family.  Joke was on me there.

Homer Smith once wrote that a defense would need 17 players to stop everything an offense could conceivable do on any given play.  It would take eight men to fill each gap in the running lane, five men for the underneath zones, and four men for each deep zone.

Because defenses only get to play with the same 11 guys that offenses get, defenders have to take calculated risks and wear multiple hats on a single play to stop everything an offense might throw at them out of a given look.  This disadvantage is compounded by the fact that offensive players know exactly where they are going and where the ball should be while defenders have to react quickly based on tendency an instinct.

In football evolution, offenses are proactive; defenses are reactive.  Each generation of offense brings a new unstoppable beast which defensive coordinators eventually catch up to.  As a rule, there is nothing truly "new" about these offenses.  Instead, they represent a new wrinkle in something football teams have been doing for 40-80 years.  For example, Malzahn's cutting-edge offense uses series that have their origin in wing-t, I, single-wing, and split-t/wishbone formations.  Malzahn's "spread to run" is one of many iterations of "spread" offenses around the country whose purpose is forcing the defense to spread out and take advantage of favorable matchups that occur when 11 men defend 17 men worth of space.

Defensive coordinators have adjusted to the spreads by putting more speed on the field.  Instead of the old 5-2, 4-3, and 3-4 formations (while you all likely know this, the first number represents the number of defensive lineman and ends in a formation, the second number represents the linebackers), coaches are going for more flexible 3-3-5 and 4-2-5 formations to get an extra defensive back on the field.  Auburn's Ellis Johnson prefers the 4-2-5.  Our friends at Coug Center did a good job diagramming the basic looks here. 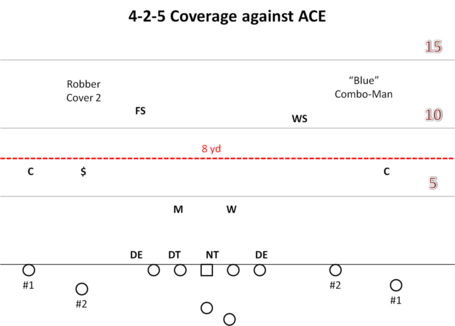 Auburn has one extra defensive back called the Star, represented in this diagram by the $ which Johnson likes to fill with a player with linebacker size and safety speed.  Last year, Auburn didn't have a player that matched that description and instead used players including Robenson Therezie who served more as an extra cornerback with good tackling ability for run support.  Therezie is a ball player and makes up for his lack of size with good versatility.

What follows is a very broad, general review of the Auburn defense.

Auburn's defense starts up front with four lineman with their hands in the dirt.  Some defenses (usually those with odd numbers of linemen like a 3-4 or 3-3-5) ask their down linemen to clog holes, attract double-team blocks, and allow their linebackers to make plays without duress.  By contrast, Auburn expects their line to make plays.  Auburn's linemen generally charge straight off the ball into their assigned gap and try to get penetration into the backfield to disrupt the play and put pressure on the offense.  Also, bucking the current trend, Auburn does not flip their defensive linemen to strong and weak sides of the formation (again, not to be patronizing, but if you drew a line down the middle of the ball dividing the offense left and right, the strong side is the side with more offensive players on it, generally the side with a tight end).  Instead, Auburn asks the linemen to play the left or right side regardless of offensive strength.  These tweaks are an attempt to keep the defense from being put out of position or confused by the myriad of formations and shifts they will see in today's spread offenses.  Johnson substitutes out his linemen on certain drives to keep them fresh for the fourth quarter and also on third down in certain distance and field position situations to get more size or speed on the field.

Behind the line are the linebackers.  Most of the pressure of Johnson's defensive scheme falls on them.  Because the defensive linemen are aggressively moving up field, some offensive gaps will widen because the offensive linemen will attempt to use the defensive lineman's momentum to push him out of his gap.  Because the linemen aren't consistently putting hands on the linemen in an attempt to clog the hole and control space, Johnson's linebackers have to be good at shedding blocks and making tackles.  Early on, the linebackers seemed to have difficulty handling an offense that came straight at them with a lead blocker (see, LSU, or don't see it, that was painful).  By season's end, they did better at standing strong in the box (see, Alabama). As opposed to the linemen, the linebackers to change sides based on the strength of the formation with one linebacker (Mike) always playing the strong side, and one lined up to the weak side (Will).

In the secondary, Auburn has two true safeties.  One is the boundary safety (meaning he plays on the side with the nearest sideline relative to the position of the ball presnap) and the other is the field safety who takes the wide side of the field.  The Star is a safety/linebacker hybrid whose position varies based on formation but tends to play on the strong side of the defensive formation.  The Star may play even with the linebackers to make a 4-3 defensive look against traditional formations or may be in the secondary to give a pure nickel look.  If Auburn wants to show blitz, the star may even be lined up on the line, either outside the ends or even inside the tackles.  Similar to the safeties, the corners flip to the field and boundary side depending on the position of the ball presnap.  Auburn plays a good mix of man and zone coverage based on the opponent that week and the personnel available to Coach Johnson to stop it.

This is the 30,000 feet view of Auburn's scheme.  I hope to get into more detail on each position group, alignment, and other matters before the season and preview what you can expect to see from opposing offenses in the future.