Contributor Josh Dowdy presents the results of a recent survey of Auburn fans. The survey was designed to discover whether Auburn fans who don't perceive AP bias against Auburn also oppose the idea of Auburn making new claims to old national championships.

Share All sharing options for: AP Bias and Old Championships—What do Barners Believe?

Editor's Note: I'm going to have a response article and poll option here on the site this afternoon or tomorrow. It just depends on if I can write it during my lunch hour or not. Put me in the column of someone who has never really believed there was a "bias" against Auburn. But we'll get to that. For now take a look at what Josh has put together...

What defines an Auburn fan? Because Auburn has a creed, the Auburn Family can be described as sharing a common set of beliefs. George Petrie said "Auburn men and women believe in these things." The extent of overlap between Auburn people and Auburn fans we will leave for another day. Today we will ask a few questions about what Auburn fans believe.

What questions did I ask? Well, first allow me to explain the inspiration for the survey.

In my post last week I suggested a one-loss Auburn team would likely not be included in the 2014 College Football Playoff. I admitted to assuming the CFP committee will share the anti-Auburn bias that the AP pollsters and Coaches' and Harris pollsters have shown in the past, though the committee has not yet had opportunity to exhibit said bias. My assumption caused me to learn something. Not all Auburn fans believe the AP voters have exhibited nonobjective disdain for Auburn in casting their votes.

As I stared at a comment on the screen—experiencing the confusion of my first ever exposure to an Auburn fan questioning anti-Auburn bias in the AP poll—I eventually found myself thinking, this is probably one of those guys who thinks we shouldn't claim additional past national championships. I then became curious as to whether any correlation exists between the two positions. That is, do other fans who don't perceive anti-Auburn bias among the AP voters also think we should not claim national championships for 1983, 2004 and other past seasons?

Here is the survey. Feel free to mark your answers if you like, but I've already received more than the 100 responses (for each copy of the survey) that a free SurveyMonkey account allows me to access.

Now let's get into the data. Only 13% of the Twitter responders answered No to question no. 3. That is, 13% do not believe the AP has shown any bias against Auburn. Of the responders that make up that 13%, 54% do not want to see Auburn claim additional past national championships. So there really isn't a correlation there. The Twitter responders who don't perceive AP bias are split on whether Auburn should claim national championships ex eventu.

What about on facebook? Only 7% of those responders answered No to question 3, but 86% of that 7% oppose claiming old championships. So there's more of a correlation among the facebook responders, but that correlation exists among a smaller sample size than for the Twitter responders, and it also follows the most significant distinction between the two data sets. 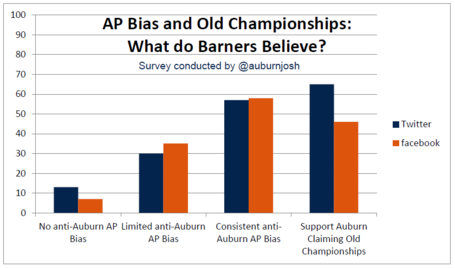 What if we look at it in the other direction? Of the 35% of Twitter responders who oppose claiming old championships, only 21% do not perceive some AP bias against Auburn. Of the 53% of facebook users who oppose ex eventu championship claims, even fewer, 11%, perceive no AP anti-Auburn bias. What's this all boil down to?

According to the survey:

When combining the data, we see that 89.5% of all responders believe in at least some anti-Auburn AP bias. The fact that most people believe something doesn't make it true. But that brings us back to question no. 1. Most of the responders (69% on Twitter; 71% on facebook) self-identified as Auburn fans of 20 or more years. Most of the responders at least claim first-hand familiarity with 2004. Likely many of them were around in 1983. So the perception of anti-Auburn bias in the AP is common among Auburn fans who have had their eyes on things for a while.

Hopefully, none of this will matter in 2014-15. We'll win 12 games, and then the SEC championship game and then be selected by the committee for the playoff, even though we'll be fifth in the AP poll!

Josh Dowdy is a College & Mag contributor. He also writes about Auburn sports and the Auburn Family at heartofauburn.com.