Walt discusses the final game in his top ten games that have the most personal meaning to him.

In the late evening hours of 30 November 2013, my brother and I were wandering the Auburn campus just soaking it all in. I think at least once every 5 minutes I would turn to him and say 'That just happened."

It happened, alright. I still have trouble believing it.

I can't even begin to properly explain just how amazing a month of football I had during the last four weeks of the season. It started with the Miracle at Jordan-Hare. Then I was able to watch Georgia Southern take down Florida via ESPN3 and my AppleTV with my father and brother. Georgia Southern got their first FBS win in their last game as an FCS team. I can only imagine Coach Erk Russell up in Heaven smiling down on that game. As the last four-sport letterman at Auburn and seventeen years as the defensive coordinator at the University of Georgia, his creation finally getting it's first major FBS victory over FLORIDA had to have been especially sweet. My month of football ended with watching Auburn win the SEC Championship and capping an unbelievable 2013 regular season. Those three things alone would have made 2013 one of the greatest football seasons I've ever experienced. There was one more game in that time span, though. One amazing game.

Due to family obligations, my girlfriend was unable to attend the Iron Bowl with me last season. There was really only one option for who I would ask to take her ticket: my brother. He and I have been to more football games together than I can even begin to count. To say he was thrilled when I invited him along would be an understatement. We knew it was going to be a big game. We never could have imagined just how big.

Our morning started early. And I mean EARLY. I wanted to get a decent spot at ESPN's Game Day to be visible with my flag pole. We dropped our tailgating stuff off in my office and then headed up to Game Day. I have a feeling many of you saw me quite clearly on TV and will remember it when you see this picture: 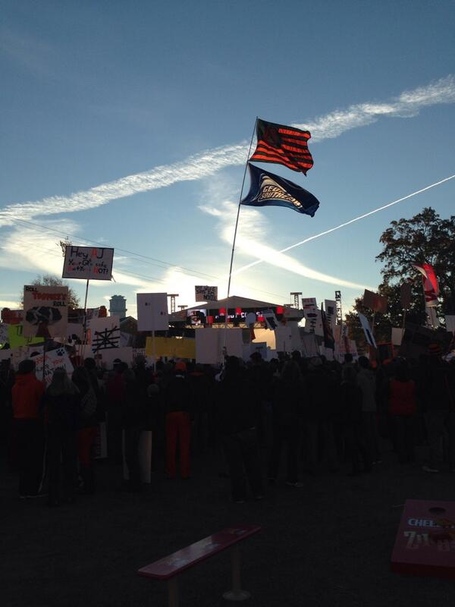 We were there for all of the early pre-Game Day stuff and for about 45 minutes of the actual show. We then headed off to tailgate with some of my brother's friends before coming back to the Game Day set for the final 30-45 minutes. I was able to keep my flags in the center of the screen for most of the time I was there, right in between Fowler and Herbstreit. If Game Day comes back to Auburn again you can bet I'll be there doing the exact same thing. I got a shout out on Twitter by Georgia Southern's Athletic Director, which was awesome. You can see them flying just above the white tent in the center of the screen in the video of Corso making his picks:

Afterwards, we returned to the tailgate and continued our pre-game activities while watching the Ohio State/Michigan game. When that game went down to over time, I clearly remember my brother saying to the entire group that "the state of Alabama could not handle overtime in the Iron Bowl."

I won't recount the whole game. It was definitely a roller coaster ride of emotions. There are all sorts of "What Ifs" that can be talked about on both sides of the ball and what led up to the final outcome. What I'll never forget is the amazing play to tie the game and my brother mentioning the Iron Bowl Overtime statement earlier in the day. The Kick Six was amazing and one of the greatest football plays in college football history. However, can we take a little time to discuss the beauty of that play fake to tie the game? I jokingly referred to Marshall as "Zone Read Ninja Nick" during the latter half of the season last year. He proved it on that final drive. He had the vision to understand what was happening with Alabama's defense and the football smarts to run that fake. The tucking of the football into his non-throwing hand to sell the run is one of the best things I've ever seen an Auburn quarterback do. I think the DBs would have bit on the run anyway, but that tuck sold it in a way that just running wouldn't have. It was beautiful. I'm still in awe of it. Had Auburn gone on to win in overtime we would be discussing that as one of the best plays of the season.

Instead it was overshadowed by what followed.

I used the sentence "we left them too much time" way too much last year, but this was another one of those cases. I just knew as Alabama started to move the ball that we were going to have our hearts broken. It was going to be 1985 all over again. I was dreading that outcome up until it became absolutely clear that the ball was not going to reach through the uprights. I don't remember what I was thinking when Davis began to bring it out other than "GO DAVIS. GO!!!!!!" I think I realized he was free and clear when everyone else did. You can clearly here that moment around the 18 second mark of this video put out by Auburn Athletics. The moment when the Commentariat of EveryDayShouldBeSaturday witnessed it and commented in the open thread for that days' games is worth a look as well. Just scroll until everything turns green. Language warning applies if you're sensitive to that sort of thing.

The post game reactions? Some of the best I've ever read. Let's start with what our own Chris Fuhrmeister wrote in the immediate aftermath. Then go read the always amazing Spencer Hall's ode to the game from later on in the evening. Finally, if you haven't already read it, then you absolutely MUST read what Winston Shi of the Stanford Daily wrote. It is some of the best sports writing I've ever read.

What did I do? Well, by the time Davis reached the 15 yard line, I was hugging everyone within three rows and screaming my head off. My brother and I held off on rushing the field (I still remember the pepper spraying of students following the last time Auburn students rushed the field in 2001 against Florida), but people were jumping the walls and landing in the hedges all around us. When they opened the gates, we made our way out into the throng and joined in the revelry. It was amazing. It resulted in one of the pictures I will keep with me all of my life. 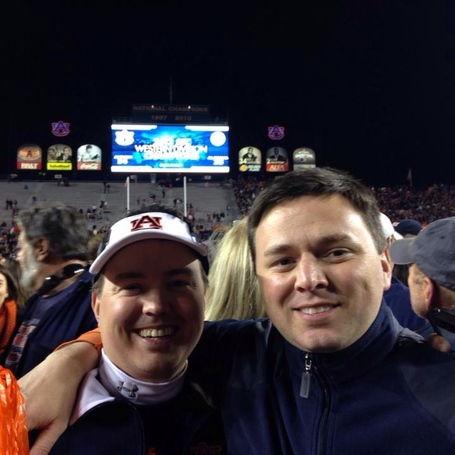 That's me on the left and my brother, Cliff, on the right. For all of my life when this game is brought up I will be able to say "I was there. We were on the field. It was unbelievable."

That game - that PLAY - will go down as one of the greatest ever. It may be THE greatest play ever just for all of the circumstances surrounding it. Actually being there for it is one of the greatest experiences of my football watching life. To wander the campus afterwards and see the entire campus being rolled. No tree was safe. It was a beautiful site. And ESPN captured it perfectly for their SEC Network Commercial.

In victory or in defeat it's still always great to be an Auburn Tiger. For that night it was perhaps the greatest thing in the sports world. War Eagle, everyone. Always.