How Offenses Attack, or Why Defenses Look Like They Do

A brief summary of offensive theory that affects how defenses align and play.

I was getting ready to write a story about how Auburn's defense lines up.  I will still write an article on the subject, but first, I feel like I need to write this one.  If you're like me, it's hard to process information until you understand why it's important or how it can fit into something you already know.  An article on how Auburn's defense aligns may be more useful after you realize why defenses look like they do and what they're trying to accomplish.

As I've said before, offenses are proactive, defenses are reactive.  The offense knows the formation it will line up in and the play it will run.  Defense has an educated guess based on the offensive personnel on the field and can narrow it down to a few options based on the formation the offense chooses.  Even then, defenders have to process the first step the offense takes, recognize the play, and fight to favorable position.  Below we're going to look at how offenses can attack a defensive front in the running game, how a defense recognizes offensive strength, and how offenses make plays look alike.

In the running game, there are five basic ways to beat the defense to the point of attack: power, misdirection, zone, option, and quick hitting plays. I'm going to show how these work on the field by diagramming a power play, counter, zone, option, and quick pitch.  Please excuse the handwriting. As Joe Walsh said, "I'm an analog man in a digital world."

The first, most traditional, and most mansome way to attack is through pure power.  Below, I've drawn a power play out of an I.  The linemen block down, the fullback kicks out, and the tailback goes through the hole.  If everyone does what they are supposed to do, the tailback will be behind the linebackers with only a man or two to beat before the endzone. 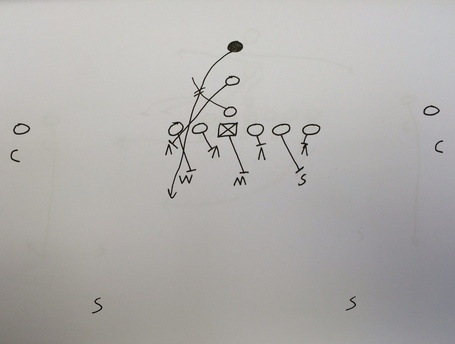 Like the offense, the defense tries to bring the most people to the point of attack.  If a defense gets overly aggressive in pursuing the action on a play, an offense may try to catch them out of position with a misdirection play.  Let's stick with the I formation and show a play that looks like the power we diagrammed above, the Counter.  On this play, the backside guard and tackle pull and the fullback "fills" the hole left by the pulling linemen.  The tailback starts left, like a power, before cutting back against the grain.  While this takes a while to develop, the hope is that the defenders will get out of position pursuing the power, leaving a hole for the counter. 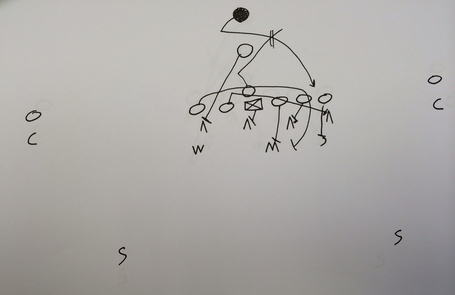 Zone is form of blocking rather than a play.  Rather than traditional blocking in which each lineman has a specific assignment based on rules, in zone, offensive linemen play the defender in their area.  The offensive linemen may be looking to double team certain linemen at the point of attack or they may all be moving in the direction of the play, looking to put a hat on the first defender to enter their area.  The idea is that each defender at the point of attack will be blocked.  The running back watches the blocking unfold and follows the widest hole or cutback lane to daylight.  Because the running back selects the widest hole, the offensive lineman has more liberty in where he tries to take the defender.  As long as the defender is pushed out of the lane and can't make the play, he doesn't have to be pushed back. 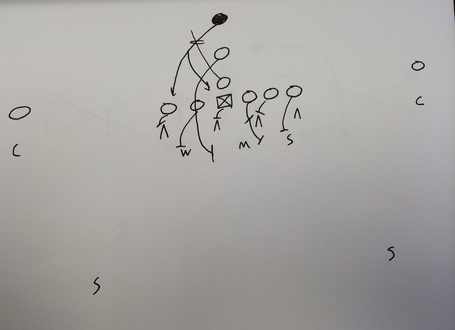 While watching, you can spot a zone play because all the linemen (or at least all "uncovered" linemen who don't have a defensive lineman directly in front of them) will be moving in the same direction as the running back with their first steps.

An option is based on a simple theory: it is far easier to cause a man to take himself out of a play than it is to block him.  On options, offensive linemen will intentionally leave a defender unblocked.  The quarterback will bring the play toward the unblocked defender.  If the unblocked defender plays a certain way, the quarterback makes one decision.  If he plays another way, a different decision is reached.

Let's look at this through an early triple option (developed in the 60s at Houston although the triple option itself is probably a Split-T invention in the 50s), the split-back veer.  This particular version is an "outside veer."  The offensive line leaves the playside defensive end unblocked.  The quarterback advances down the line and the halfback charges toward the hole.  The QB puts the ball in the HB's stomach and the HB gently squeezes.  If the DE moves to tackle the HB, the QB keeps and continues moving down the line.  If the DE plays upfield towards the QB, the QB leaves the ball with the HB.  If the QB keeps, he continues down the line to his next unblocked "read" defender.  Against the look below, it's likely to be the safety.  Some teams would flip this, sending the tight end after the safety and making the strongside linebacker your pitch key instead.  At this point, he decides to keep it or pitch it based on the same process he made with the DE.  If the pitch key chases the quarterback pitch; otherwise keep. 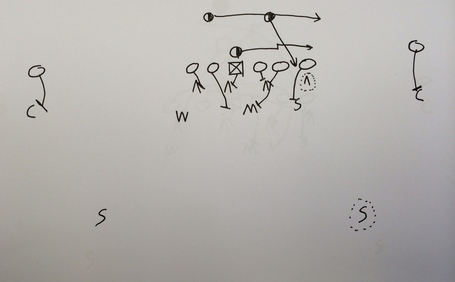 Commentators call a lot of things "options" now that aren't options.  They QB is just performing really committed ball fakes that looks like an option read.  If you see a play that looks like an option but aren't sure, look for an unblocked defender.  If there's a hat on every man at the point of attack, it's a predetermined play, not an option.  If you see an unblocked defender, check to see if the quarterback's eyes are on him while the ball is in the back's basket.  If he's not watching the unblocked man, it's probably not an option.

Sometimes the easiest way to bring more hats to the point of attack is to get there as fast as possible.  Sticking with split back formation, here is one of the quickest plays, the old quick pitch.  Both backs flare and linemen pull in every direction as the tailback tries to get the corner. 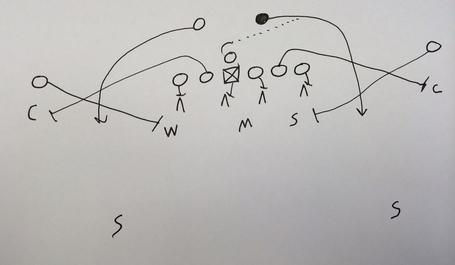 Another common example of a speed play is a jet sweep where the ball is handed to a receiver moving full speed immediately as the ball is snapped.

If an offense outnumbers the defense to one side or the other, it creates a mismatch.  To ensure that you've created a sound defensive alignment to each offensive formation, you draw an imaginary line right between the center's legs and count as seen in the diagram below.  A defense must shift its personnel right or left to have equal strength on both the right and left side of a ball presnap.You also need to make sure that (certain blitzes notwithstanding) you have enough help at all possible points of attack. 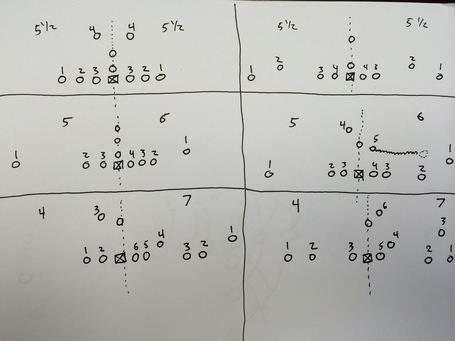 The side with more offensive players is considered the strong side.  The other side is the weak side.  For the purposes of player alignment, some defenses declare the side with a tight end to be the strong side regardless of how many players are lined up opposite of the tight end.  This does not obviate the need to keep the same number of defenders on each side of the ball as the offense has offensive players.

Offenses design plays in series that look alike.  Look above at the I power and combo for a good example of how this is done.  You have two plays that look very similar for the first second they develop.  If the offense can freeze defenders with a moment of indecision, it helps the offense beat the defense to the point of attack.  Here's a third play in the same series called the "counter pass:" 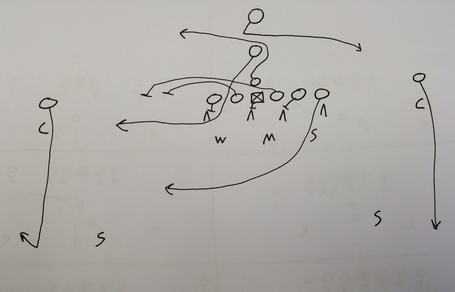 Because the linebackers have to both respect the counter and help with coverage of the intermediate crossing route run by the tight end, the fullback will be open against any defense on every level of football.

WHAT DOES ANYTHING ABOVE HAVE TO DO WITH DEFENSE?

Before I just started saying things like "against 21 personnel, Auburn shifts the tackle on the strongside to a 3 and slides the weakside tackle to a 1 outside eye of the center" I thought it might be handy to know what the defense is looking at and what they're expecting.  It may make it a little easier for us to speculate why Ellis Johnson is doing what he's doing.  It's important to know that defenses align like they do because they're trying to (1) balance the strength of the offense and (2) stop and punch or counterpunch the offense might throw.

Next time, we'll start to get into how the Auburn defense lines up.  With this background, it may be a little more obvious how Washington State's running backs averaged seven yards per carry against us.