The Buck Sweep: A Malzahn Special

When the defense crowds the box, the Buck Sweep gets the runner outside. Fifth in a series explaining the Tiger offense. Previously: The HUNH, Formations, Inside Zone, Power/Counter

Share All sharing options for: The Buck Sweep: A Malzahn Special

For a play so unique to Auburn and Gus Malzahn, I am amazed that I didn't write about the Buck Sweep until the SEC Championship Game with Missouri. But this is the play that caught Chris Brown's eye (of smartfootball.com) in 2009 when Malzahn was using senior Ben Tate and freshman Onterio McCalebb to showcase his running game. Though it wasn't used as much in 2013, it is still a critical part of Auburn's offense.

What is the Buck Sweep?

Simply put, a sweep is a run that starts laterally and turns downfield somewhere outside the box, usually near the sideline. Specifically, the Buck Sweep is unique in that outside offensive players block inside defenders and offensive linemen block outside defenders. In a way, the play looks like Power, with a wall, a kickout and a lead block, but as far from the center of the field as possible. 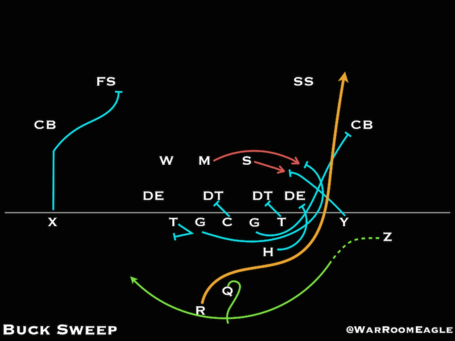 As I said, the Buck Sweep is a lot like Power, so the objectives are largely the same, but adjusted for reaching the perimeter of the defense.

Prevent backside pursuit. This isn't much of a problem as the running back is sprinting to the playside as soon as the play begins. Still a defender not accounted for at the beginning of the play could be the one that tracks down the play from behind and prevents a big play from being any bigger.

Give the running back room to turn the corner. So if the wall includes the tight end and the H-back, who is creating the running lane? The two pulling guards who are huge blocking mismatches on the corners and/or safeties out on the perimeter. Yes, those defensive backs have speed on their side and can sometimes knife through to reach the ball carrier. But hopefully the guards have just enough speed and the back has enough patience to keep the defenders in a bad position and then wait until just the right moment to turn downfield.

Freeze linebackers with fakes. It wouldn't be a Malzahn play if the Buck Sweep didn't include multiple ways to occupy backside defenders. More often than not, the Buck Sweep includes the quarterback and slot receiver faking a reverse. The quarterback continues the fake by looking downfield and holding his hands up as if he is about to throw a long pass. These fakes slow the safeties, thereby giving the pulling guards more time to get outside.

Several X&O blogs have broken down the Auburn Buck Sweep, but Brophy has done as good a job as any at explaining exactly what each player's responsibility is. If each player is able execute his responsibility, the running back should be able to outflank the defense.

The backside tackle and center do the same for the Buck Sweep as they do for Power. The tackle performs the pick and hinge and just absorbs the defensive end's rush and the center turns to immediately close the hole left by the pulling backside guard.

With Power, the playside guard and tackle double team the playside defensive tackle and one climbs up to the #2 linebacker (counting playside to backside). Since the both guards pull with the Buck Sweep, the playside tackle has to handle his man by himself and close the hole, similar to what the center is doing.

The H-back's Buck Sweep role is similar to his Power role as he blocks the defensive end, but instead of kicking him out, he rolls the end back inside.

One key feature of the Buck Sweep is the crack block by the Y receiver on the #1 linebacker. Rather than occupying a cornerback like he might with a speed sweep, the receiver joins the H-back and three linemen to wall off interior defenders. This five-man wall gives the running back and his two escorts, the pulling guards, time to get outside.

When the defense sees the tailback running laterally and the guards pulling, the linebackers start "scraping" over, following the flow of the offense over the top of the defensive line. Though the #1 linebacker should already be occupied by the Y, the backside guard's job is to block the #2 linebacker as he makes a move for the runner.

The running back takes the ball running laterally and follows the pulling guards. Now with Power, he should hit the gap as soon as it opens because it isn't staying open long. With the Buck Sweep, he can actually show a little more patience. If he is in space with two blockers in front, he needs to make defenders commit and then make a decision. The running lane could open between the two guards or between the guards and the sideline, but once it opens, the runner turns downfield and hopefully gets a big gain.

Adapting to an Under Front

While watching the Auburn offense over the summer, I noticed that the Tigers sometimes ran Power, but the pulling guard would run way outside the box as if it were a sweep. It turns out it wasn't Power, but an adaptation of the Buck Sweep. 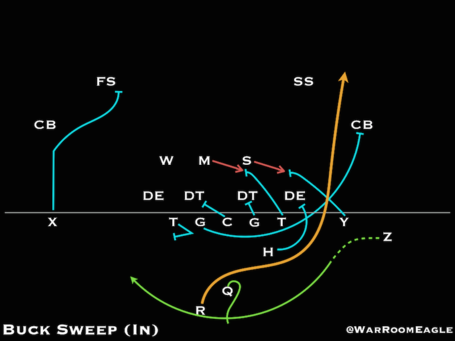 The playside tackle is responsible for the defensive tackle inside, but what if that tackle is in the A-gap rather than the B-gap? This is called an Under front, a common variation of the 4-3 alignment. Reaching an A-gap defender is difficult for an offensive tackle, so the playside guard makes an "In" call and stays in line to hold the A-gap.

When the "In" call is made some responsibilities are shifted. Clearly, the playside guard is responsible for the defensive tackle, so the offensive tackle immediately works up to the #2 linebacker. And since the #2 linebacker won't be a threat scraping across the formation, the backside guard takes the playside guard's original responsibility and blocks whichever defender presents a threat outside.

Why use the buck sweep?

The first three plays I discussed, the Inside Zone, Power and Counter, are all basically runs up the middle. Defenses can load up on one side to stop any one of these three, but one of the other two could be open. All three can be contained if the defense loads up both side of the box. Eight- and nine-man boxes were not uncommon against Auburn last year. But when that many defenders get inside, they are exposed to runs outside.

Even if the defense isn't overly playing the inside runs, individual players could be. The playside defensive end might get tired of being kicked out play after play, so he starts to pinch inside after the snap. This inside movement prevents a kick out, but he is no longer in position to maintain any outside leverage, so the Buck Sweep is used to punish this adjustment. The offense gets past the end man quickly and the inside movement makes the log block much easier.

When I watch Auburn run Power or Counter, I like to watch Reese Dismukes shove an unsuspecting defensive tackle just after the snap. When I watch Auburn run the Buck Sweep, I like to watch the pulling guards. These two big men aren't fast or agile, but from a blocking standpoint, they are a huge mismatch when going up against defensive backs. While other sweeps might use receivers to block corners, one of the Buck Sweep's biggest advantages is in creating this mismatch.

Finally, the assignments for most players don't look different from the previous three running plays. When compared to Power, the center and both tackles do exactly the same thing. The first few steps of the backside guard and the H-back look the same, too. Only the pulling playside guard and the crack blocking receiver are really different. And if the playside guard has to stay inside, you can see why I thought the "In" adjustment was a variation of Power.

Is this play actually a big part of Auburn's offense?

In 2013, not really. It was a bigger deal in 2009 and 2010, but it was rarely used last season and when it was, it didn't lead to long touchdown runs down the sideline like it used to. However, it is rather unique to Gus Malzahn, so I felt it should be included.

Also, some other outside runs use similar concepts. Due to the immense talent and H-back and quarterback, it made sense to reach the outside with other plays. For example, Jay Prosch and C.J. Uzomah were able to basically replace the pulling guards on some sweep plays. And Nick Marshall's fake inside runs slowed down linebacker pursuit which allowed Corey Grant and Ricardo Louis to rack up yards outside, even without lead blockers.