If and when defenses stop the run, Auburn has to be able to pass. Seventh of a series explaining the Tiger offense. Previously: HUNH, Formations, Inside Zone, Power, Sweeps, Wrinkles

Last year, pundits frequently discounted Auburn's offense as a one-dimensional attack that would fail once the running game was contained. That never really happened. Sure, the Tigers only attempted a total of 16 passes against Arkansas and Tennessee, but when called upon, Nick Marshall was able to keep defenses from stacking the box by tossing the ball to his talented receivers. With another year of experience and some new targets, the passing game should improve and the rest of the offense will flourish with it.

How does the line protect the quarterback?

Before the ball is thrown down field, the quarterback has to have time and space to make his reads. Auburn uses a few simple methods to create this pocket with five-, six-, or seven-man protections.

Much like zone runs, zone protections allow an offensive line to block a certain area instead of a certain defender. The linemen retreat, expand, and allow the defense to come to them. This largely negates any stunts or twists from the front seven. With five linemen, this method usually pulls three blockers to one side and two to the other, but it is really determined by how the defensive line attacks.

If more protection is needed, the H-back and running back can add blocks to the pocket. Auburn uses this protection when both backs are on the same side of the quarterback. As they move forward to create one side of the pocket, the five linemen all shift the other way, especially the linemen furthest from the backs. This seven-man pocket is stronger to one side than than the other, but it usually holds up well enough.

One nice thing about using backs for added protection is that they can leak out and provide a check down for the quarterback. For example, the running back will stay in the backfield and count rushers. If a blitz comes, he stays back to block. If the line can handle the rush itself, he runs around or through the line to give the quarterback an easy target should nothing else open up.

Finally, Auburn uses a protection that includes a pulling guard. The guard should be able to reach an edge rusher from the other side before he gets the quarterback while the H-back fills the hole left by the pull. This sounds much more complicated than the typical zone protections, but there's a benefit. Defenses key on guard movement to quickly determine if the play is a run or a pass. As soon as that offensive lineman takes a step back and runs behind his teammates, linebackers and safeties will start toward the line of scrimmage only for a pass to go sailing over their heads and into the hands of a receiver. 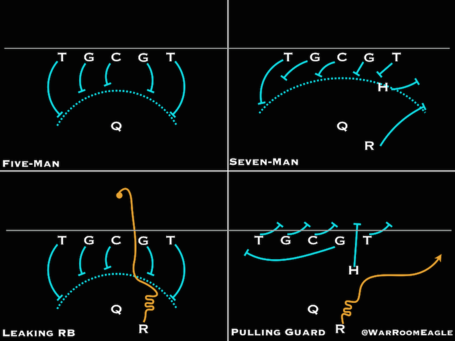 How do the receivers get open?

The passing game is intended to put defensive backs in conflict. Instead of exploiting a 1-on-1 matchup (though that does happen), routes are combined to create 2-on-1, 3-on-2, and even 4-3 situations. When the offense has a numerical advantage like that, at least one defender has to guess and it's the quarterback's job to make his guess wrong.

When a team relies on the run as much as Auburn does, it has to be able to hit big passes downfield. Gus Malzahn likes his chances this year. "Really for the first time, at least since I've been at Auburn, we've got deep threats at every position we put on the field. Hopefully that'll equate in some big plays in the passing game."

If Auburn truly has deep threats at every position on the field, expect to see plenty of Four Verticals. It doesn't have the exotic look that some pass plays have, but it is very effective at getting so many receivers down field that the defense can't cover them all. And if they can, each receiver has the option to cut the route short and run a dig or comeback instead.

Malzahn calls one of his favorite big play combos "Little Rock", but in more universal terms, it's called the NCAA route or just Post/Dig. As you have probably heard, this is the play that won the Georgia game, though Nick Marshall didn't exactly make the right read, even according to his head coach. Both routes attack the deep middle of the field and create a 2-on-1 matchup. The defender in that zone has to decide to cover the receiver in front of him (Dig) or behind him (Post). Either way, the offense is likely to get a big play.

Another deep route combination Auburn uses frequently is the Post/Wheel combo. The outside receiver runs 10 yards down field and cuts inside. Meanwhile the inside receiver takes a few steps forward and turns toward the sideline to show an out route, but then he turns down field. If the post is open, the quarterback has to hit him in rhythm as the window is likely a small one.

However, if a defender chases the post inside, he has left the sideline open for the quarterback to hit the wheel route.

Now, not every pass has to travel 15+ yards through the air. In fact, many times a receiver will run an out route into the area vacated by his deeper-running teammates. But Auburn uses plenty of route combinations that purposefully focus on the first 10 yards past the line of scrimmage.

A very basic one is called Hitch, or All-Curl. Simply put, every receiver runs five to six yards downfield and turns around. This has the same effect on the defense that Four Verts does. The defense is likely not prepared to cover four receivers at one level sideline to sideline, so the offense likely gets a 4-on-3 matchup. The quarterback just has to find the open guy, preferably the shortest throw against the softest coverage. And, like Four Verts, the receivers have options if the defenders take away the Hitch. If a corner is playing too close to the line of scrimmage, the receiver can run a fade route to blow by him. If the defense is playing man-to-man defense, an inside receiver can run straight forward and then sprint away from the defender to get separation. 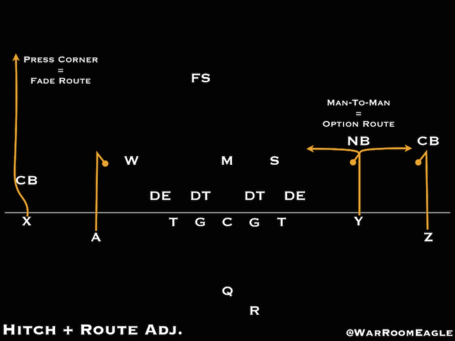 Smash is a classic route combo that combines an outside hitch with a corner route over top. This puts the so-called "flat defender" in a bind. If he stays in the flat to cover the hitch, the corner route will open up behind him. If he retreats to stay in front of the corner, the hitch is a simple pass and catch for 5+ yards. Auburn nearly always uses this with rollout motion, giving the quarterback a good look at the routes as they develop. He can also take off on his own if the two routes are covered.

Um, what is Chad Slade doing 10 yards down field?

Auburn uses three basic screens. The first is the Bubble Screen, which is usually paired with the run game. The other two are a tailback screen and a tunnel screen to a receiver. The offense can run one or the other individually, fake one and throw the other, or even run both at the same time and let the quarterback decide which to throw.

The offensive line plays a crucial role in both the tailback and tunnel screens. After showing pass protection initially, at least two linemen will leak out to the play side. This draws defensive linemen into the backfield and, if the quarterback can get the ball out to his target, they have been effectively taken out of the play.

If the screen is going to the running back, he will also leak out to the play side but stay behind the line of scrimmage and look back for the pass. The offensive linemen, plus any receivers to that side, should be able to create running room. If the screen is going to an outside receiver, he takes a few hard steps at the cornerback and then wheels back into the backfield. Meanwhile, inside receivers and offensive linemen are charging down the field and toward the sideline to kick out any defenders on that side of the field. This creates a running lane, or a tunnel, for the receiver to fly through.

Is there any "window dressing" for the passing game?

It wouldn't be a part of the Malzahn offense if it couldn't be dressed up or disguised. There are several ways the offense tries to fool the defense. Perhaps the simplest is the pass protection with a pulling guard mentioned earlier. This makes the defense expect a run when a pass is actually on the way.

Auburn also uses lots of play-action to fool the defense into expecting a run. Sometimes, the fake handoff is very deliberate and the typical blocking paths of the H-back and receivers turn into routes down field. (See the touchdown pass vs FSU as explained by Jim Light.) But with a running game as potent as Auburn's, the safeties often bite when the running back simply runs in front of the quarterback across the backfield.

Another way the offense can deceive the opponent is by faking a certain route and then running another. For example, in the play below, three receivers each show a Hitch route and the defenders do a nice job of limiting their space. But Sammie Coates never was actually running a Hitch route. Instead, he tapped the brakes long enough for the cornerback to step forward and then he blew right by him.

Finally, whereas play-action makes pass plays look like run plays, draws makes run plays look like pass plays. A useful counter to the Rollout Smash play is the Smoke Draw. The entire team runs Smash like normal, but as the quarterback slides behind the running back, he discretely hands the ball off. That the offensive line didn't burst off the line like they would in a normal running play sells it even more.

Over the last few posts, we've seen how Auburn's offense starts to build and build onto itself. It can get pretty complicated, but basically the offense is trying to make the defense cover the entire field. The best impromptu description of the offense as a whole I have heard comes from John Ringer, who co-hosts the AUWishbone Podcast with Van Allen Plexico. A listener asked how the offense would be characterized by the media this season (starting at 20:40) and, after some back and forth, John summed it all up. (edited for clarity)

And I think the thing that is so exciting about Auburn throwing the ball better is there was this whole other Judo kind of element to it where we could take advantage of what defenses were doing but we couldn't execute in the passing game long enough last year to do that to them and this year I think we can. I think teams are gonna really really really over play the run against Auburn early this season and I think they're gonna come up with a lot of guys in the box and kind of of dare us to throw the ball. And Marshall is gonna have to make them pay again and again. I think we see a lot of defenders within 10 yards of the line of scrimmage and I think Auburn's gonna have to make them pay by throwing the ball over their heads and getting big plays and I think with the receivers and with Nick Marshall throwing better we can do it and then I think defenses are in real trouble.