A Wake for the Streak

A retrospective on Auburn's incredible 88 game winning streak when scoring 30 points or more.

Share All sharing options for: A Wake for the Streak 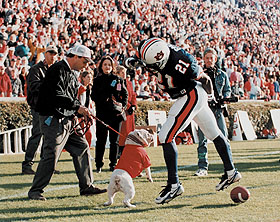 One second to play, Georgia with the ball on the Auburn 30, down 7 when this happened:

The game goes to the first overtime in SEC history and Auburn loses a heartbreaker 56-49 in four overtimes.  I was 17 years old that night, sitting in my parent's seats in Jordan Hare for the last time ever before starting college.  We had been to hundreds of games together growing up and all I could think was, "it's not supposed to end like this."

This loss wasn't any ordinary loss.  It was hearbreaking.  But it also started an amazing run.  Auburn would not lose again when scoring 30+ points for the next 17 seasons.  Auburn won 88 straight games when scoring 30+ with five different head coaches and who knows how many starting quarterbacks.  The Streak started with Dameyune Craig under center and ended with him as a middle aged Auburn assistant coach.  The 88 games between were memorable and should be celebrated.

The Streak started on New Year's Eve, 1996.  Let's set the stage.  Bill Clinton had just been reelected and no one had heard of Monica Lewinsky.  ER, Seinfeld, Suddenly Susan, Friends, and other scripted shows dominated the television.  Pop stars and reality television were still a few years from catching on.  Danny Wuerffel won the Heisman on the way to a national title.  Barry Sanders led the NFL in rushing. All year, people were doing the Macarena.  Independence Day and Twister topped the box office.  Fittingly, the top song in America was Toni Braxton's Unbreak My Heart. Seriously, this happened a long time ago.

The Streak started in the awesomely named Poulan Weedeater Bowl.  Auburn built a 32-7 lead on the Army Black Knights and held on to win 32-29.  Craig threw for 445 yards of total offense which, to my knowledge, is still the Auburn record.

In 1997, Auburn beat LSU 31-28 on a Saturday night in Tiger Stadium.  Craig threw for 342 yards and LSU ran forever.  Cecil "The Diesel" Collins would still be running if he hadn't been caught by the law.  Along with 1988, 1994, and 2006, this was one of the best games of the strange Auburn/LSU series.  Auburn followed up with 30+ points against UCF, Louisiana Tech, and revenge against Georgia.

In 1998, Google was founded and Bill Oliver made his first and only appearance on the list, beating Louisiana Tech 32-17 the day after Terry Bowden resigned.  I still have a reward pending of one drink at Fink's for anyone with accurate information about the demise of the Bowden era.

In 1999, Tuberville announced his presence with authority with a win over Idaho and an absolute throttling of LSU:

Look at 2:49.  Ronnie Daniels was incredible that year.

2001.  George Bush was President.  Alicia Keys was Fallin'.  Auburn was continuing the Streak with wins over Ball State and Louisiana Tech.

2002. Lose Yourself by Academy Award winner Eminem was the hot song of the fall.  Bobby Petrino put a few more 30+ performances on the board as Auburn beats Western Carolina, Vandy and Miss State.  Auburn finally set things right against the 'Cuse.  Auburn would also beat a 10th ranked Nick Saban  LSU squad 31-7.

Wins over Ole Miss and Louisiana Monroe continued the streak into 2003.

2003.  The US had just invaded Iraq.  Jim Fyffe passed and Rod took over.  Auburn made its last NCAA basketball appearance.  Shake Ya Tailfeather by Nellie, P. Diddy, and Murphy Lee was #1 when Auburn beat Vandy and Western Kentucky.  Auburn finished the year by beating Miss State and Louisiana Monroe.

2004.  Do you still remember the words to Hard Fightin' Soldiers?  Louisiana Monroe was the first of a long list of members of the 30 points club in 2004.  They were joined by Miss State and Citadel before Auburn visited Tennessee.  At 0:37, Ronnie Brown announced what kind of game it was going to be:

2005.  YouTube was founded.  Auburn's offense lost its quarterback and two running backs in the first round but still improved under offensive genius Al Borges.  Let that sentence sink in.  We're still eight full seasons after the Streak started and eight years before it would end and it still feels like a long time ago.  Harry Potter and the Goblet of Fire and Star Wars Episode III dominated the box office. Batman Begins was released.  Auburn beat Ball State and Western Kentucky before welcoming Steve Spurrier back into the conference 48-7.  Auburn then beat Arkansas and Kentucky.  Late in the season, Auburn traveled to Georgia.  I was watching at a bar in State College Pennsylvania.  At 6:21, people thought I had lost my mind.

2006.  Arrested Development was cancelled.  The Thumb was Feared.  Auburn beat Wazzu, Miss State, Buffalo, and Tulane to continue the streak with a team that preferred to suffocate opponents and run out the clock.

2007.  Saban arrived at Alabama.  Alabama lost to Louisiana Monroe (which has nothing to do with the Streak but is still funny).  Auburn beats New Mexico State, Vandy, and Tennessee Tech.

2008.  A year of Hope and Change. Hope missed Auburn.  Auburn beat Louisiana Monroe and Tennessee-Martin to continue the Streak in a forgettable year.  Change found us that December.

When the rain stopped, Auburn outlasted WVU 41-30.  Auburn would go on to put up 30 against Ball State, Ole Miss, and Furman.  Walter McFadden took a pass 101 yards the other way to help Auburn top Northwestern in a crazy bowl game:

The game was close.  And then, it wasn't and even Bobby Petrino--now on the receiving end of the Streak--seemed confused about how it got out of hand so fast.

Then we drubbed our Washington Generals, the UT Chattanooga Mocs.  Auburn came back and crushed Georgia at the height of the Cam scandal.  Then, in their best game of the year, the Tigers destroyed South Carolina again in the Georgia Dome.

In 2011, an Auburn man took over Apple.  Auburn needed 42 points and a little magic to keep the streak alive against Utah State.  Seriously, where did Travante Stallworth come from and where did he go after that?  Auburn followed that win with 30+ games against Miss State, Florida Atlantic, Ole Miss and Samford.  On December 31, 2011, Chizik committed the cardinal sin of Auburn coaches--winning a Peach Bowl (See Chizik 2011, Tuberville 2007, Bowden 1997, and Dye 1990, it's a program crippler).

In 2012, Auburn only won three games but put up 30+ in each win against Alabama A&M, New Mexico State, and Louisiana Monroe.

2013 brought a new coach and added 11 games to the streak.  Auburn outlasted Wazzu and the Dread Pirate Leach and Arkansas State.  Then Auburn took out Ole Miss and Western Carolina.  Then, the Tigers woke up.

The Streak's days were numbered but the best was yet to come:

Seventeen Iron Bowls happened during the Streak.  Auburn won ten of them.  This is the only one in which Auburn topped 30 points and it took a full 60:00 to get there.

The last win in the Streak was an SEC title win over Missouri.  Tre Mason was a man possessed.  Auburn broke the SEC Championship Game record with 677 yards of total offense, 545 of which came on the ground.  But my strongest memory of that game will always be Nick Marshall's touchdown pass to Sammie Coates over two defenders.

Then, against Florida State, the Streak came 13 seconds short.  That loss moved the Tigers to a respectable 305-5 all time when scoring 30+ points.

The loss also ended a Streak that lasted half my life.  It saw me wrassle with more angels than I would care to remember.  When the Streak started, I was a skinny high school kid with big dreams.  When it ended I was an overweight and content attorney in Birmingham.  The Streak saw me move twelve times, covering four states, seven towns, and 2,800 miles.  It saw me through six years of undergrad, two years of grad school, three years of law school, a few bad jobs and a few good ones.  I got married, had three kids, and lost one of them.  I imagine most of you reading this would have similar stories of life change over the last seventeen years.

It's ok to feel bruised after a loss like FSU.  I'm still bruised after Georgia 1996.  But we can't let our memories of those two losses overwhelm the good times and amazing victories during the Streak.  Records come and records go, but it's always Great to Be an Auburn Tiger.