Power and Counter in the Auburn Offense

One distinction of Auburn's spread running game is the inclusion of gap schemes like Power and Counter. Fourth in a series explaining the Tiger offense. Previously: The HUNH, Formations, Inside Zone.

Share All sharing options for: Power and Counter in the Auburn Offense

In my review of last year's Arkansas State game, I briefly explained the Power and Counter plays after Gus Malzahn mentioned when discussing Auburn's tempo, but the descriptions found there only explained the roles of two players out of eleven. These two plays are fundamental football plays and since they made up such a large portion of the running game last year, they deserve a more detailed breakdown now.

What are Power and Counter?

In my last post on the Inside Zone, I briefly discussed the difference between gap and zone running plays. To reiterate, zone runs aim to block general areas along the line of scrimmage while gap runs are supposed to open specific holes in the defense. Power and Counter are gap running plays.

Individual gap-based runs are defined by who blocks who. One or more linemen may pull and block a defensive tackle, defensive end, work up to a linebacker, etc. With Power, the H-back kicks out the end man and the backside guard pulls around to lead block through the gap the kickout created. 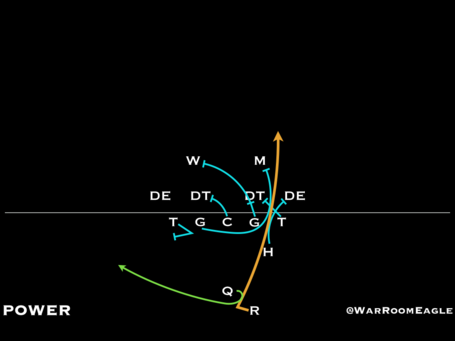 They swap assignments with Counter as the backside guard pulls around to kick out the end man and the H-back lead blocks through the gap. 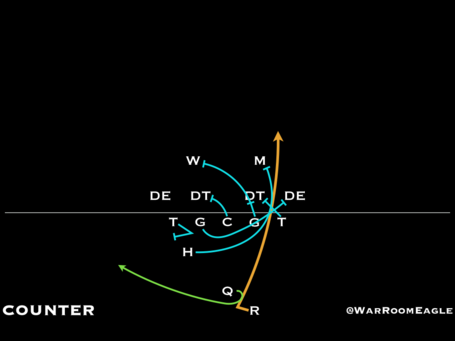 The 2007 Tulsa Offense video didn't include any objectives for these runs like it did for the Inside Zone, but here is my take on it.

Prevent backside pursuit. Unlike with Inside Zone, the backside tackle is responsible for this, usually by himself. Of course, the offense may mix in reads and run fakes in that direction, too.

Build a wall away from the point of attack. The center and the playside guard and tackle have one job. They must contain the interior defenders. This includes both defensive tackles and any backside linebackers. The playside defenders are handled by someone else.

Give the running back room in the gap. Ideally, the kickout block would force a defender out of the box, the lead block would seal a defender in the box, and the running back would run through the huge hole in between. But if a defender is in a position that prevents that ideal situation, the offense still has to open a hole. If a defensive end squeezes inside and prevents a kickout block, the offense should log block him, or roll him further into the mess in the middle. Likewise, if the lead blocker can't seal the linebacker inside, he should allow the defender to overplay the run and then drive him out of the lane. Or even better, he can push the player straight back and let the runner decide which way to go.

Freeze linebackers with fakes. When Auburn ran Power or Counter, there was nearly always a threat to the other side. Either the quarterback would bootleg out of the pocket or the slot receiver would motion through the back of the formation. The threat of a quarterback keeper, play action pass, jet sweep or end-around keeps linebackers and safeties from quickly diagnosing the actual play and attacking the run up the middle.

That Tulsa video did, however, give the specific assignments for each lineman and back. They are not as fluid or reliant on teamwork as the Inside Zone, but if everyone can reach and hold their blocks, the back should have space to work with.

The backside guard takes a drop step and pulls around to the playside. This leaves a huge hole in the line, so the center must close it immediately. He may get some help from the tackle but he can't rely on it.

The playside guard and tackle are responsible for the playside defensive tackle and the #2 linebacker (counting playside to backside). If possible, they can double team the defender at the first level, but it is important that they build the wall, along with the center, that prevents defenders from stuffing the run before it begins.

If the play is Power, the H-back kicks out the first man outside the tackle. This should open a hole between the H-back and the wall behind him with only the #1 linebacker standing in the way. Meanwhile, the backside guard pulls around, "scrapes paint off" of the wall, and blocks the linebacker out of the way.

If the play is Counter, the backside guard pulls and kicks out the first man outside the tackle. This should open the same hole that Power does, but the H-back blocks the #1 linebacker.

With this gap open and cleared of defenders, the running back just has to hit it as quickly as possible. There is nothing to read like with the Inside Zone and the hole is probably going to close up quickly as defenders shed blocks and swarm to the ball.

Why Use Power and Counter?

One advantage gap schemes have over zone schemes is their ability to get bodies to the point of attack. Zone runs try to spread defenses out and let the running back find the hole. Gap schemes get extra blockers to the playside and knock defenders out of the way. If the line has done its job, the running back doesn't have to guess about where to go. Auburn separates itself by being one of a handful of hurry-up, spread teams that has the size and strength to overpower defenders with the straight forward Power and Counter.

So why not just use Power and forget Counter? Well, for the running back, quarterback and 4 offensive linemen, the plays are exactly the same, so if the team learns one, it is pretty "cheap" to install the other. But teams also use both plays so the defensive end doesn't always know who is kicking him out. This uncertainty can cause some hesitation.

Now you may have noticed that Power is run from Stack and Counter is run from Slant. What keeps defenses from keying on those backfield formations? The Inside Zone.

To add to the defense's confusion, the playside tackle-guard combo block in Power and Counter looks exactly like an Inside Zone double team and the center blocks the same in all three plays. Only the pulling guard and the pick and hinge tackle change their initial steps. So both gap-based plays are needed to protect Auburn's base play, Inside Zone. And with those three plays, the Tigers can attack the defense to the left or the right, with zone or gap blocking techniques, out of any of their eight base formations.

That's pretty tough to defend. But Auburn doesn't stop there. Power and Counter can be "wrinkle-ized" just like the Inside Zone, and it's those adjustments, which we'll discuss later, that make the running game nearly unstoppable.