A Beautiful Touchdown and a Lot of Stalled Drives

Going into the game, we knew that San Jose State was going to take shots down the field and had the potential to make us look bad.  Once or twice they did.  But all in all, I was very pleased with the way the defense played against a talented and well-coached offense.

Let's start with the bad: San Jose State's 75 yard touchdown.  If you can turn off your Auburn filter for a second and just look at this as a football fan, this is a beautiful play. Let's diagram it below: 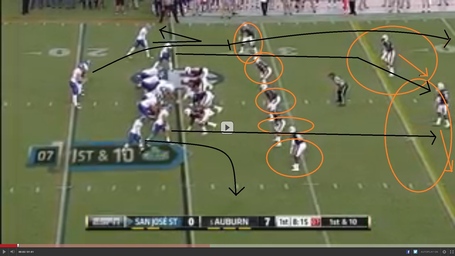 Click for a larger picture.  San Jose State is in a tightly bunched double twins set.  Auburn is in cover 2 zone under. Auburn has two deep safeties each covering half of a field and five defenders responsible for short zones.  San Jose occupies the deep safeties by sending their inside receivers on deep routes that took them away from the play.  The real action on this play, however, was yet to come.  The receiver to the top of the screen goes two yards past the line of scrimmage and turns around and comes back, setting up what looks like a wide receiver screen.  The running back wheels out of the backfield looking like he's going to block the corner.  Josh Holsey is the corner at the end of the line.  Holsey reads screen and starts forward to beat the block and make a play in the backfield.  The quarterback pump fakes the screen.  Holsey is shocked when the running back streaks past him rather than blocking him.  The quarterback sees that the design has worked and turns look the pass as soon as the running back is even with Holsey.  Holsey couldn't catch up.  The playside safety (Moncrief) chased the post to the middle of the field and couldn't help (he later took a poor pursuit angle and missed a tackle that allowed the play to go 75 yards for a touchdown rather than 45 yards for a first down).  Touchdown San Jose.

(As an aside, Will Herring did an excellent breakdown of this same play  here and believes Auburn may have rotated out of the cover 2 zone under look after the snap into a cover 3 zone under with the defensive back on the bottom of the screen, Reed, dropping back to occupy a deep third along with Moncreif and Whitehead.  It would make sense given the presnap position of Whitehead and Moncrief, and some of the stills Herring uses show a wider angle of the field than I've seen and it supports the theory of a cover 3 zone under.  Will's knowledge of football is certainly more recent and more expansive than my own so there's every chance he's right.  But in the stands before the play, I saw cover two and left the stadium convinced.  On film I didn't see indisputable video evidence to change my mind so that's what I'm sticking with.  Either way, the aim and result of the play are the same).

Now I hear y'all at home: 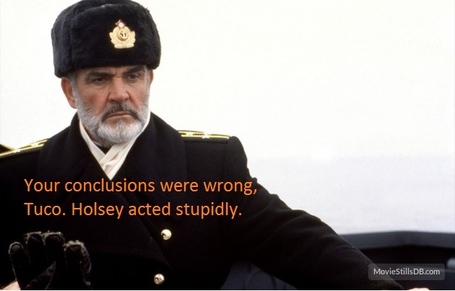 I'll just say this.  First, this is a well-designed play.  It's a textbook example of how to attack cover two zone under.  If there are two safeties deep, send three well-spread receivers deep.  It was also well-designed in that it put Auburn's help defender on the wrong foot.  The screen fake and blocking fake really, put Holsey in a bind.  Holsey read the play as a screen based on what SJSU had run earlier in the game and what they had shown in film study and is coming forward to stop it.  Suddenly, he has to change directions 180 degrees to keep up with a very fast running back who was already going full speed.  Holsey actually reacted rather well given the circumstances (and his lack of experience at corner).  He knew the safeties were busy so he followed the threat deep.

Second, it was a well-executed play.  The ball was in the air for a long time, it came down in a place only San Jose could have gotten it, and the running back ran under it in stride.  Even had Holsey been in the receiver's hip pocket, this still would have been a 20 yard gain.  That play would have scored on most defenses in college football.  I'll give Auburn a pass on it, especially in light of how the rest of the evening went.

The video below shows a good example of a coverage sack.  Auburn has no blitz on and the SJSU quarterback held the ball for about four second before the pocket collapsed and Gabe Wright got him:

The most frightening realization of the evening was that Montravious Adams is not just a monstrously-athletic, technically-sound, 300-pound, defensive tackle but is also a very clever football player.  At some point in the game,  Adams figured out SJSU's snap count. 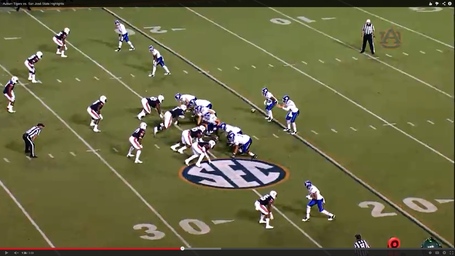 If you enlarge this picture you can see Adams moving forward across the line of scrimmage while 21 other players stand still.  The ball is about halfway to the quarterback.  With that kind of jump, Adams makes bad things happen:

He's past his blocker and blows up the sweep before it has a chance to get going.  He got a similar jump on his sack.  I had a hard time finding footage of the sack but based on my memory from Saturday night, I think this is it:

As pointed out in various comment threads, SJSU had some success against Auburn with quarterback draws on obvious passing downs.  They aren't the first team to do so and here's why.  When Auburn faces an obvious passing down (3rd and long), they often go to man cover 1 or 2.  They put one defender on each of the wide receivers and keep one or two deep safeties.  Often, the defensive tackles widen out to twin three techniques (the outside edge of the guards, link to primer for picture of defensive line alignments).  Against SJSU, the defenders would be in twin two techniques (head up on the guards) but their first moves were to the guards' outside shoulders to get extra leverage and a one on one block.  This leaves the offense with a blocker for each defender at the point of attack.  The defense doesn't have help close enough to the line of scrimmage if the play breaks.  Auburn has one man on each receiver

A picture may help.  This is a diagram of one of the QB draws SJSU ran against us. 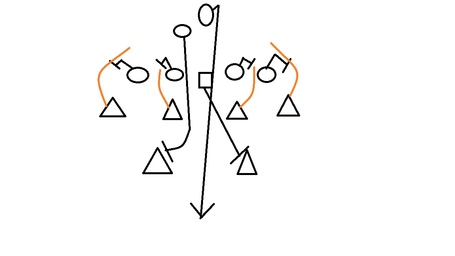 The defensive linemen aggressively hit the outside shoulder of the men across from them so the linemen don't have to work too hard to clear them out of the running lane.  The guards and tackles pass block to freeze the linebackers long enough for the center and running back to get to them and block them.  If the linebackers don't make a play, the quarterback will run until the safeties catch up to him.

Auburn actually burned SJSU twice with a ver similar draw.  San Jose State was in a cover two man.  First was the long run Nick Marshall had before the fumble.  Then they caught them in the same look later in the game for the Marshall touchdown.  The safeties split to help with pass coverage, the line made their blocks, and no one catches Nick with a full head of steam.  Here's a picture of the alignment before the snap followed by video: 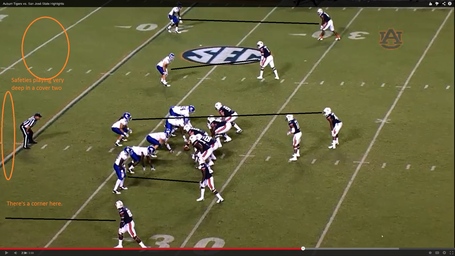 Due to the SJSU defensive alignment, Auburn wraps the guard around to block the linebacker but the principle remains the same.

(As an aside, the reason I'm not concerned about Kansas State gouging us with designed quarterback runs up the middle is that Auburn will play different defensive front alignments and assignments on running downs against a known power football team like Kansas State than it would against SJSU.  They'll play Kansas State more like they played Arkansas.)

All in all it was a good showing.  Ellis Johnson says the defense performed well on all but a dozen or so plays which had mental mistakes.  Through three quarters, SJSU had run 61 plays.  Auburn held 33 of those plays to two yards or less (which is a pretty good ratio).  Auburn had three interceptions, four sacks, and held SJSU to under 100 yards rushing on 45 attempts.  That's a good day.  Giving up only 13 points to a very competent, well-coached offense is a good day.  This is a defense with room to grow but one that can be (and may be now) good enough to give Auburn a chance in every game they play this year.  I left the game optimistic.

Player of the game? Again, Cassanova McKinzy and Jermaine Whitehead are strong contenders.  Cassanova led the team with ten tackles.  Whitehead became the first Auburn player since Jerraud Powers in 2007 to intercept passes in consecutive games.  But my player of the game is Rudy Ford.  The recently converted running back  had eight tackles, a key interception, and was always around the ball.  He also made a tremendous open field tackle:

If Ford doesn't make this tackle, the quarterback could have picked up significant yardage and had a chance at a touchdown.  Just because it was an extremely clever play, here's his interception as well:

I still have the game on DVR were there plays or thoughts you'd like discussed?  Just ask in the comments below.