So what happens when Auburn has a bye and Alabama plays Southern Miss? We get to enjoy a weekend of mostly stressless football viewing and I get to play the Random Word Association Game in the style of my favorite Game Show Network game, Chain Reaction*.

Much to the delight of children everywhere, let's eat dessert first and start with the uncontested highlight of the weekend, Mark Richt’s glorious loser ... 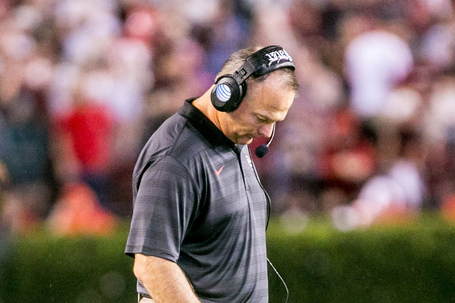 Jeff Blake--USA TODAY Sports
Look at him. Look into his eyes. Those are the eyes of a man who won't win the SEC. Again. Rinse and repeat. Never change, Mark Richt. I found South Carolina’s victory particularly delicious for two reasons:

1. I like it when Georgia loses at things. It pleases me greatly.

2. I like it when Steve Spurrier wins at things. It pleases me greatly.

This isn’t an observation, but I really hope Nick Marshall put in some face time with Rhett Lashlee and ALL of his receivers during the bye. His passing game was putrid last week, and I already feel crummy about Thursday’s game. But more on that several words from now!

Or, alternatively, FaceTime is never not awkward. Just saying.

Someone needs to put these LSU fans in timeout.

But seriously. The bonus commentary at the end is worth it.

The first half of the Kentucky-Florida game belongs there. Also most of the second** half. And probably Will Muschamp’s head coaching career.

I want to give Cameron Artis-Payne a nickname and I want it to be "House Call." "MAGNA CARTA HOLY GRAIL ARTIS-PAYNE" is a little cumbersome, especially for Twitter. He just needs to break one loose and BAM--it'll stick. Corey Grant was already christened "Tail Lights," and I think "House Call" would complement it nicely. We'll have to see more of Roc Thomas but MAN his nickname potential is off the charts.

But back to Muschamp. Quick poll: do we think he went to work yesterday or nah? Because I wouldn’t have. Florida deserved to lose that game. Hard. It'll be interesting to see where Florida's season goes from here.

SICK as a DOG

As long as we’re taking polls, how many stadium stairs do we think Alabama safety Nick Perry had to run after getting ejected for targeting AGAINST SOUTHERN MISS? For his transgressions, he’ll miss the first half of the Florida game. Whatever Mr. Perry’s punishment was, I’m sure it involved puking in a trashcan.

It was nice to have a brief reprieve from the dog days of [literally every season in Alabama] this weekend, as temperatures were pleasant and didn’t require emergency personnel. I hope it will be a trend because there are a couple of Auburn games I plan on attending in the near future and I’d appreciate not dying of a heat stroke.

Any non-SEC game. Stop throwing the damn ball so much. I need to go to bed.

In the long run, I think the College Football Playoff will be a great thing for the sport. In the short run, I’m already suuuper tired of seeing everyone’s Top 4 and it’s only September.

Since you asked, here’s mine:

4. Hitting all the lights in downtown Tuscaloosa***

Arkansas put a hurtin’ on the Fighting Ryan Goslings, huh? That makes me feel slightly better about Auburn’s first half against the Hogs and infinitely better about the second.

BERT, however, is still the worst.

Ah, here we are. The end of this convoluted and confusing road. If you've stuck with it this far, you're a champ.

Coming off a bye, Auburn will face the Kansas State Wildcats in a Thursday game that makes me nauseated to think about. This has all the markings of a trap game, which we’ve all known since it was moved to Thursday night. But Gus isn’t Tubs and in all likelihood, his team will be ready to play. However, as a baseball fan, I’m terrified of the jinx. So I will continue to be nauseated about this game until the clock hits 0:00 and Auburn is 3-0****.

If you’re making the trip to Manhattan, I hope you have safe travels. If you’ll be watching from home, come join us in the College and Magnolia open thread or follow along on Twitter. I’m sure there will be plenty to talk about, and we can battle the nausea together.

*Move over Family Feud and Love Connection. Y'all may be the funniest, but Chain Reaction's sheer nerdiness stole my heart.

**We watched OT at a bar named after Legion Field. That’s the whole story.

***You’ll either hit them all or hit them none. Feast or famine. Guess which one is most prevalent.