What Went Wrong in the First Half Against Arkansas

Share All sharing options for: What Went Wrong in the First Half Against Arkansas

The good news.  Our defense looks to have picked up right where it left off.  The bad news.  They still lack consistency.  I was at the game Saturday and rewatched the game quickly last night to jot down some notes. Here's what I saw.

First, the obvious: Arkansas had a lot of success on offense in the first half.  This success was due to a combination of clever, new wrinkles in Arkansas' running game, mental mistakes by the Auburn players, and the fact that Arkansas has some legitimately talented running backs who made plays.  Let's look at Arkansas' second offensive possession.  Arkansas spent most of this possession in 21 personnel with bunch trips to the strong side: 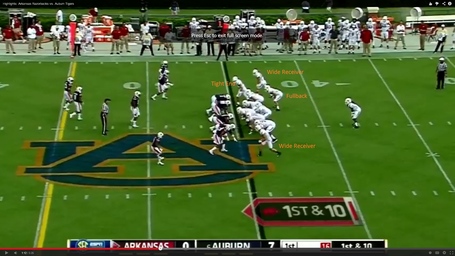 Arkansas runs a toss sweep to the narrow side of the field.  Their line and receivers seal well and they pick up 7.

Here's where things get interesting.  Arkansas ran a wingback trap.  This isn't a new play (it's fairly common in the wing-t), but it is new to Arkansas.  The idea is this:

You're a defensive tackle.  The guard releases past you toward the linebacker.  The tackle is base blocking his man so you have a free path to the backfield.  The running back is coming right at you. 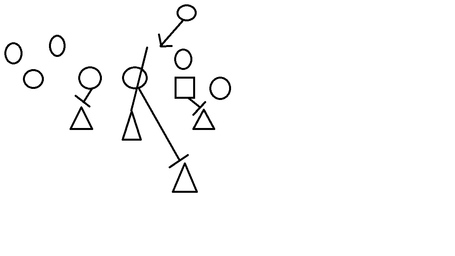 Anyone who has ever played the position knows immediately that this is a trap. You know you're about to get sideswiped by a large, angry man with a running start.  You want to work your way inside to (1) disrupt the running lane, (2) brace for impact and (3) clog things up to give team mates time to arrive at the point of attack while trying to make the play if you can.  The old technique was to "squeeze down" on the guard to keep him from getting a clean release on the linebacker while jamming things up at the point of attack.  You're expecting to be hit like this: 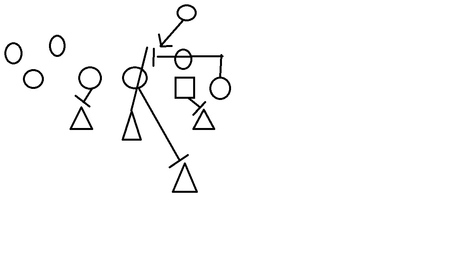 Arkansas flips the script.  The trap isn't coming from the inside, it's coming from the outside!  The fullback is going to hit you on a side you didn't expect.  If your momentum is heading inside anyway, it won't take much to get you out of the hole. 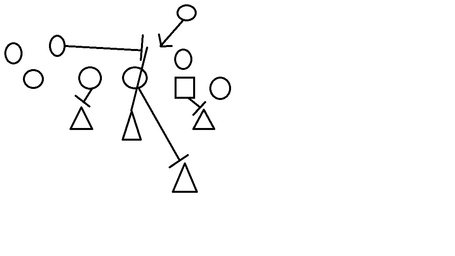 Let's look at the film (this wingback trap comes from later in the drive but it's the best film I could find of it:

Angelo Blackson is the target.  He plays a little too aggressively and the fullback easily pushes him out of the lane.  The rest of the line holds their blocks and Auburn is left with only a safety between Collins and the goal line.

The first wingback trap picks up fourteen yards setting up a first down near midfield.  Arkansas runs a stretch zone into the bunch formation. We talked about this play some last week.

The play is designed to stretch the Auburn defense to the sideline.  If everything is sealed off, the running back will go to the corner.  If the defense over-pursues, the running back will cut back against the grain.  That's what happens here. Auburn brought pressure from both corners with the Star (lined up weakside on the line of scrimmage) and the Will (lined up just inside the cornerback, four yards off the line of scrimmage).  Due to Frost's blitz, Auburn set and held the corner well.  Casanova McKinzy's job is to pursue the play and fill the cutback lane.  He over pursues as does Jermaine Whitehead, leaving a massive hole for Collins to hit.

First and ten from the Auburn 35 and it's another wingback trap for good yardage.

First and ten from the Auburn 14 and Arkansas runs a traditional trap for no gain.

Second and ten from the Auburn 14 and Arkansas catches the defense asleep.  Arkansas runs to set up the pass.  They run so much and so well that you have to respect play action.  Auburn here appears to be in some sort of zone  the whole coverage is likely botched.  No clue what they were trying to do but it certainly isn't what happened.  Play action.  A corner runs briefly with the tight end but continues chasing the sweep action into the middle of the field while the tight end breaks for the corner behind everybody.

This drive was bad.  I'd write it down to 1/3 Arkansas innovation, 1/3 Arkansas execution, and 1/3 Auburn mental errors.  Auburn's coaches shouldn't get too much blame this drive.

One more play I'd like to look at is Arkansas' second touchdown pass.  Arkansas is in 13 personnel with 3 tight ends on the field and only one running back and receiver. Auburn is in Cover 1 man.  Due to the limitations on film, you can only see the shadow of the deep safety in this picture. 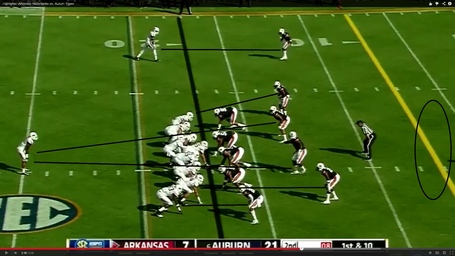 So.  You're in a heavy alignment and the defense has five defensive backs on the field and nine men crowding the line of scrimmage.  So what do you do?  Run four verts, three of which are being run by tight ends.  Not sure I've ever seen that done before. 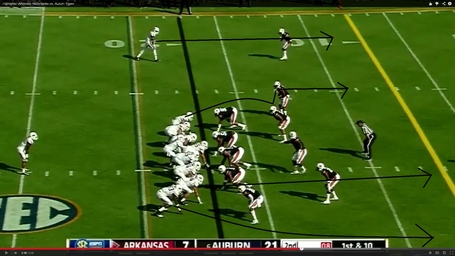 As a former offensive lineman, seeing that much meat on the hoof chugging downfield warmed my cockles.  As an Auburn fan, it caused me a lot of concern.  Let's look at the film:

Jermaine Whitehead gets caught watching the play action and lets his tight end streak past him.  He may have thought that he had help behind him but the safety got drawn to the two vertical routes at the bottom of the screen.  The result was another easy touchdown throw to a tight end.

Everyone wants to give Ellis Johnson credit for making halftime adjustments.  I think a lot of the adjustment was to the defense's attitude through an old fashioned come-to-Jesus halftime speech.  The defense played with more hostility in the second half and didn't botch as many assignments.  Auburn did throw in a few wrinkles after the half which I'll discuss below but most of the improvement came from Auburn playing better fundamental football.

First, Arkansas had a very good offensive line.  A very, very good offensive line.  Auburn's front four weren't getting much pressure on the quarterback with the aggressive bullrush they used last year.  We had to bring additional pressure.  In the second half we blitzed more aggressively than I had seen us blitz under Ellis Johnson.  The best example of this came in the pick six in the third quarter.

Auburn brought pressure from both the Will and the Star with pure man to man cover 0.  The two deep safeties are covering the tight ends (the Mike has the tailback) but when they stayed home to block started drifting back to look for work and help the corners.  Therezie gets the hit and the ball drifts to Whitehead who finds the endzone.

When Auburn wasn't blitzing, we seemed to stay in a zone under cover two more often than we did in the first half or last year against Arkansas.  The result of the tactical and attitude adjustments was a defense that looked more like the one we'd hoped to see.

A new twist Auburn unveiled against Arkansas that you'll see more of this year is a 3-3-5 alignment.  Auburn ran it four or five times Saturday but we may see it more against opponents with more finesse based offenses.  Joel Erickson wrote a nice article about Auburn's personnel usage Saturday here.

There are several candidates for player of the game.  Whitehead is an obvious choice.  He led the team in tackles and had the pick six but he also allowed one of Arkansas' touchdowns.  Robinson Therezie had a nice game forcing a fumble and applying the pressure that led to the pick six.  My player of the game, however is Cassanova McKinzy, who had six tackles including two for loss, a sack, and a forced fumble.

War Eagle and on to San Jose!