And We May Be Next

A little over a decade ago, Auburn regularly scheduled Louisiana Tech.  Tech was an early adapter of the spread passing game.  They never beat Auburn but they made us look terrible too many times to count.  In particular I remember 2001.  We had just beaten Florida the week before.  We were invincible.  Then we were in overtime against Louisiana Tech.  That's what we've invited to our house again this weekend in San Jose State.  They are coming right at you on every play and our secondary is going to have to be ready to stop them.

Publicly available game film on the Spartans is hard to come by but here are the highlights of them putting up 62 last year in a win against previously undefeated Fresno State to get you used to what you're going to see:

They lost their quarterback last year but they replaced him with a man who went 22-25 last weekend against hockey powerhouse North Dakota so they shouldn't lose a step.

Their offensive coordinator, Jimmie Dougherty played football at Missouri.  His last year at Mizzou was Gary Pinkel's first.  It's probably not a coincidence then that out of all the offenses Auburn's seen under Ellis Johnson, San Jose State's looks the most like Missouri's.

San Jose State is good at mixing it up.  On their first drive against Fresno State, they did an excellent job of reading the coverage and putting the ball in the place that would put the most pressure on the defense right on time.  Early in the first drive, Fresno State showed a cover 3.  As you'll recall from the primer, that means there are three deep defenders and four shallow defenders playing zone.  I've drawn it up below to help you visualize it.  There are several ways to attack a cover 3.  One of the best ways is short passes to the curl/flat area. SJSU threw a ten yard out to a wide receiver right next to the sticks on the sideline.  Neither the safety nor the corner could get over fast enough.  Easy first down. 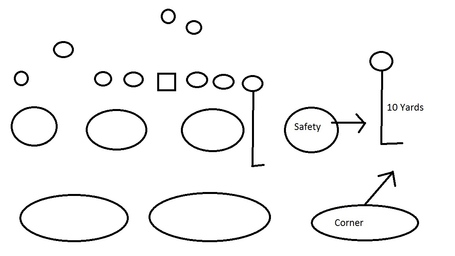 This next one I have film on but I drew this up because the world needs more of my superior MS Paint skills.  Fresno State shows man but they're actually in a cover 2, zone under.  That means there are two defenders covering deep zones and five defenders covering shallow zones.  You attack a cover 2 differently than you would attack a cover 3.  For deep routes, a cover 2 is weak at the seams.  That is to say you run sideline deep routes that make the safety cover a lot of ground to make the play or you try to split the safeties with a deep route down the middle.  You hope your corner can get a good jam at the line and reroute the receiver to the middle of the field closer to the safety.  San Jose State does a good job recognizing the coverage and runs a vertical stretch pattern.  This is one of the more familiar combination patterns in football.  One receiver runs a short out route and the other receiver goes deep.  The idea being, if the defenders chase the deep route, the short route should be open for fair yardage.  If the corner doesn't chase the deep route, the safety will have to make up a lot of ground quickly to make a play. 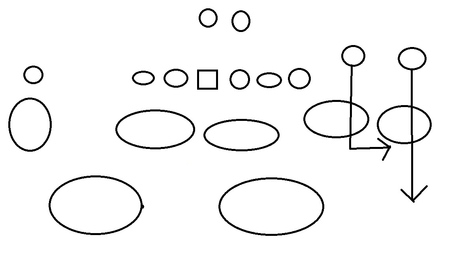 The receiver does a good job of breaking off his route and looking for the ball in the soft spot of the zone.  Again, a perfectly placed ball, a missed tackle and a good gain.

Same drive.  Fresno State swaps the zone coverage for an Auburn favorite, the Cover 1 man.  The defense is playing man-to-man coverage except one deep defender who has a zone covering the width of the field.  San Jose State takes this as a dare. They motion their running back to the strong side of the formation along with their tight end and two wide receivers.  The safety cheats away from the lone receiver on the weak side of the field. 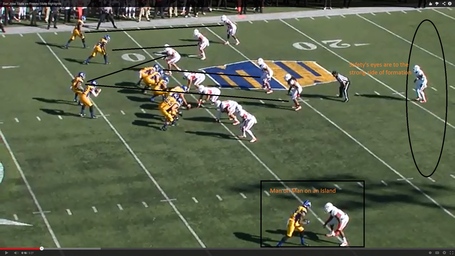 That corner is now on an island and San Jose is going to see what kind of player he is.

If you start overreacting to the threat of the deep ball (and they will throw deep with the slightest invitation to do so), they have a good screen passing game, short timing based passing game, and effective running game.  Just from the little film I've been able to watch, they seem to prefer to run with zone blocking schemes both under center and from the gun.

Last week they ran the ball forty times and passed twenty-six (completing 23 for 250 yards).  Saturday, with the world watching in a primetime ESPN2 game I expect to see them revert to their full offense and attempt forty or more passes.

What should we expect from Auburn?  Goodness only knows.  No matter what the coaches have said about treating this as a regular SEC game week, Auburn likely hopes to play a Milton Berle defense, showing no more than necessary to win.  My best guess is that Auburn will show a lot of Cover 1 and Cover 2 man (man to man coverage with one and two deep safeties respectively) trusting that we have better athletes on defense than SJSU has on offense and asking them to stand tall and make plays.  Last year against Missouri, a similar team with a better passing attack, Auburn ran some Cover 4 or quarters coverage with four deep defenders, we may see more of that this week.  If I were in Ellis' shoes I wouldn't skimp on extra deep coverage this week.  I would be in Cover 2 man or loose Cover 3 or Cover 4 zone.  These coverages would invite SJSU to run the ball more but frankly, this isn't a team that's going to beat us on the ground.  They may make a few yards here and there on the ground but they aren't going to string together several sustained 70 yard drives against grinding it out on the ground.

What to watch for: If you want to gauge Auburn's chances of success, check the grass stains on their quarterback's uniform.  If Auburn can get good pressure and harass the quarterback with their front four it will prevent San Jose from attempting long passes and allow us to keep our linebacker at home to help underneath with short pass coverage.  If Auburn can't get pressure or if we have to gamble to do so with blitzes, their quarterback is good enough to make us pay and the game won't be comfortably in hand until deep in the third quarter.  Look for Auburn to work with its new 3-3-5 alignment (replacing one defensive lineman with a linebacker) or dime packages (replacing a linebacker with a defensive back) to get more speed on the field.

This isn't a team that's going to beat us.  Their defense shouldn't be able to keep up with our offense.  But this is a team that regularly plays Stanford and other major powers and isn't going to be intimidated by Auburn.  They may make us look bad a few times Saturday night.  I'm expecting a final of Auburn 55 SJSU 24.