Almost every Soldier, Sailor, Airmen, and Marine currently serving or who has served over the past 14 years has their own personal Memorial Day. Today is mine.

On the night of January 18th going into the morning of the 19th of 2007, I started my day out just like I had the previous 152 days of my deployment. I went in to the TOC to drop some things off just before midnight and to get an idea of what type of night it was going to be like. Then I proceeded to walk over to the chow hall for midnight chow before coming back to start my actual shift.

During the first six months while I was working nights, that was pretty much my routine. Sometimes I would eat by myself; sometimes I would eat with the Papas (15Ps, flight operations specialists) who had just gotten off shift in the TOC and were getting ready to go to bed. This particular night I decided that when I saw CW2 Tim Archer (Charlie Company TACOPS (Tactical Operations)) sitting with CPT Michael Taylor (Charlie Company commander), that I would go sit with them.

Charlie Company being our Arkansas guys, it wasn't something I would have normally done because I didn't know them as well. However, I had gotten to know Tim pretty well since TACOPS and S2s tend to work together, and I had talked to CPT Taylor quite a bit during the deployment as well and knew him to be a really good guy. CPT Taylor was just coming off of working night shifts. He had been on night stand-by for the past week or so and was going back to his room afterwards to sleep the next day away and relax to get ready for going back on day flights on the 20th.

I'll always remember the conversation that night. There are some little moments that are just too good to forget, no matter what happens. I remember Mike Taylor talking about how much he loved to fly, and loved everything about his job. I was sitting with my back towards the area where everyone walked into the chow hall. CPT Taylor was in front of me. I'll never forget the way he lowered his head and covered his face with his hands saying "Oh God, there she is, I can't look at her." Tim and I both couldn't help but laugh and ask him what he was talking about. Well, as it turns out there was a cute female CW2 from our GSAB (General Support Aviation Battalion, one of the other groups of our brigade) who had walked in. CPT Taylor then told us the story behind his reaction.

See, this girl sat a few tables down from CPT Taylor one day in the chow hall and in his direct line of sight. I don't know who, if anyone, was sitting with him at the time, but he went into one of those "deep thought" modes where you just get lost staring into space. Unfortunately for him, this staring into space also happened to be directly at this female pilot. In his own words, he said when he came back to his senses he realized she was giving him "the biggest eat shit look" in the world because she thought he was just staring at her. So, he hid his face when she walked in on this night because he was still embarrassed over that moment. It was just one of those conversations with people that you never really forget.

A little over 36 hours later, CPT Michael Taylor was killed when his UH-60A Blackhawk (call sign EASY Four-Zero) was shot down just northeast of Baghdad, along with his three other crewmen and eight passengers.

January 20th of every year is the day I remember brothers-in-arms killed serving their nation. January 20th, 2007 was the deadliest day for US troops since the end to major combat operations in 2003. 25 soldiers were killed in various attacks across Iraq, 12 of them on board EASY 40. While I did not know all of the crewmen on board EASY 40, and cannot claim to have known any of them very well, they were still friends and brothers, and it's hard for me to fathom that it's now been eight years since they were killed.

I will remember this day by doing what I did last year, and what I will do every year for as long as I walk this earth. At 2:48pm, Iraqi time, the exact time in which the "FALLEN ANGEL" radio call went out to announce the downing of EASY 40, I will sit outside and I will light a cigar and smoke it, and quietly honor in my own way the brave men I knew who were lost that day.

Living in Alabama now, that time is 5:48am local time. It will be cold. It always is. I won't care. I'll bundle up and sit and enjoy the smoke and the bite of the air, and I'll remember friends and comrades in arms.

God bless you, and this great nation. And never forget the fallen.

Arlington National Cemetery records for the full passengers and crew can be found here.

The following is a video from my second deployment, when I happened to end up posted with some of the same men from that Arkansas unit I was in Iraq with. I wrote this song shortly after January 20th, 2007, but I never shared it with anyone until that night in 2010 at a Veteran's Day program on Camp Bondsteel, Kosovo. The sound quality isn't that great, but it is what it is:

Finally, there's this wonderful song by Radney Foster. When we came home from Iraq, the final elements of my unit ended up on one of these Angel Flights. We came home four men short, but we rode home with four brave men on their final journey. I could not have thought of a more fitting way to exit the theater. 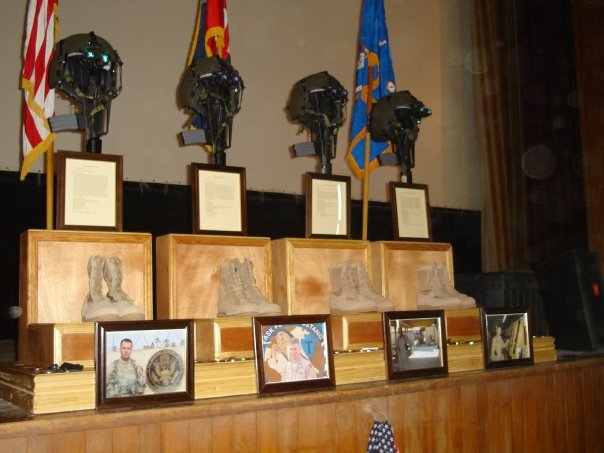