Even though the quarterback competition is "open" at this point, I think all of us are assuming that Jeremy Johnson will be the starter in the Georgia Dome against Louisville. I don't know about you, but I'm really excited to see what the offense will look like with Jeremy Johnson at the helm.

The nice thing is, we've already had a preview of it. The coaching staff was able to prepare for the Arkansas game next year knowing that Johnson would play the entire first half. They were able to gameplan around having him play the entire half, and that meant they could call plays that suited his skills. So what did they call? Let's take a deep dive..

Before we get started, you may want to queue up WarRoomEagle's cut-up of the Arkansas game (offense only). From there you can watch each play as we go.

Rollout Smash (Left): Louis and Williams to the left side. Louis's defender bails and Johnson makes the right throw to Ricardo. It picks up only two yards because Louis slips trying to juke the defender. 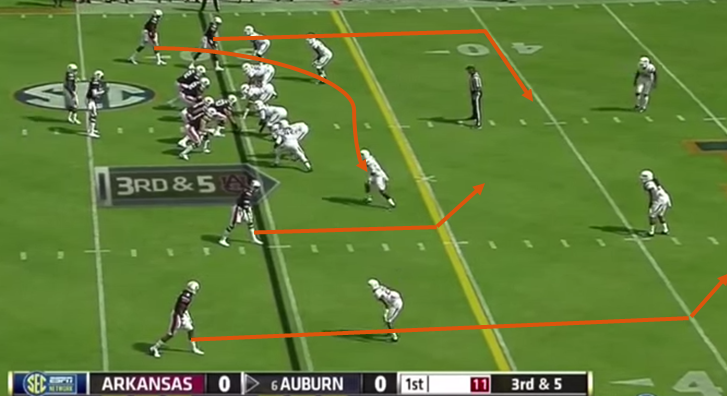 Drag + 10 yard-in/slant+vertical: Fulse and Coates in a stack at the top. Fulse runs a drag to occupy the LBs. Coates breaks open on the in cut. First down.
Williams runs a slant with Louis running a go (could be a post) behind him at the bottom. Johnson gives a look that direction, but knows that Coates should be open given the safety's reaction. 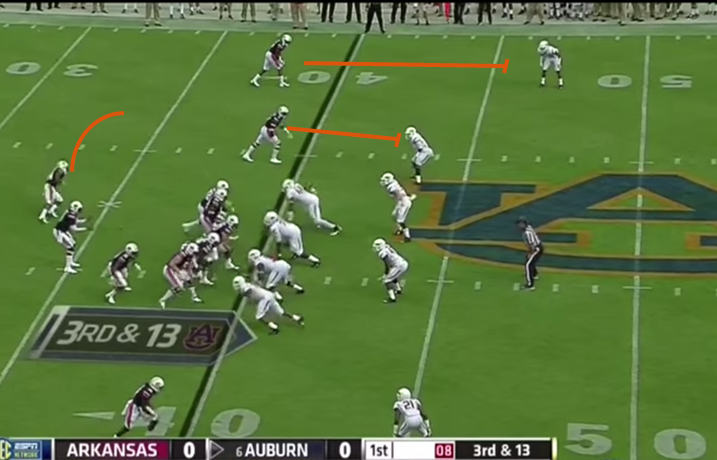 Swing Screen: A penalty on a running play backs Auburn up to where they are facing a 3rd and long. Malzahn/Lashlee go with a safe swing screen. Safeties are completely out of the picture. CAP motions into backfield, then swings out for screen. Slade/Coleman (LB) and Williams (slot defender) create a lane. CAP jukes one safety, then carries defenders across 1st down line. Sometimes a quarterback just has to get the ball to playmakers. 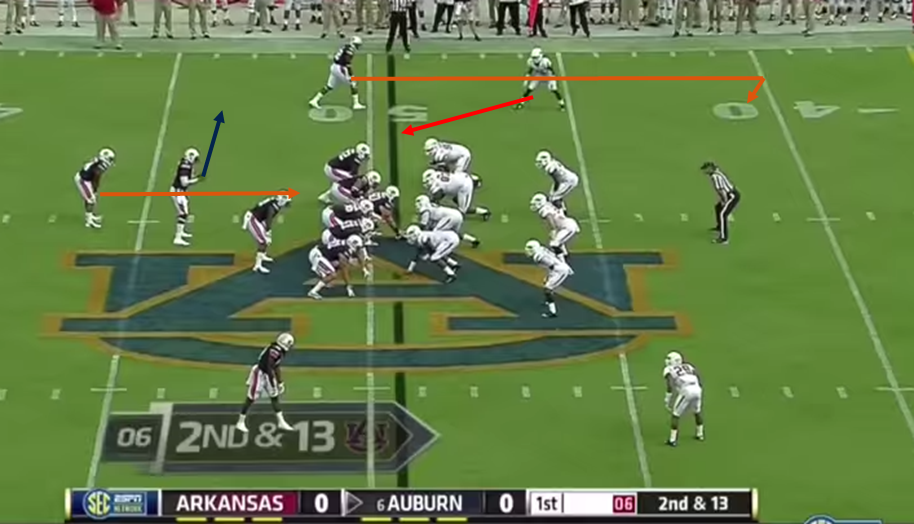 Zone Read + hitch: End crashes inside, LB scrapes, and CB covering Ray crashes as well. Johnson correctly fires the hitch. Ray makes the safety (not pictured) miss, then houses it. All too easy. Oh, and in case you're wondering: no, none of the offensive linemen go further than 3 yards downfield. 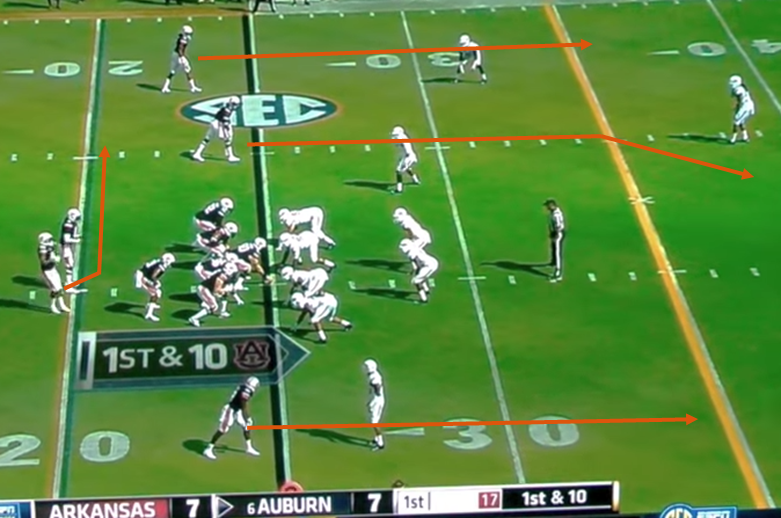 PA inverted veer; 9, bang-8, 9 route combo: PA keeps LBs in. Safeties play deep cover-2. Force defender takes RB. Williams is wide open on the quick post (Malzahn, and others, call it a "bang-8"). The throw is just a hair behind Williams, but he makes a nice catch. If only Johnson had him in stride... 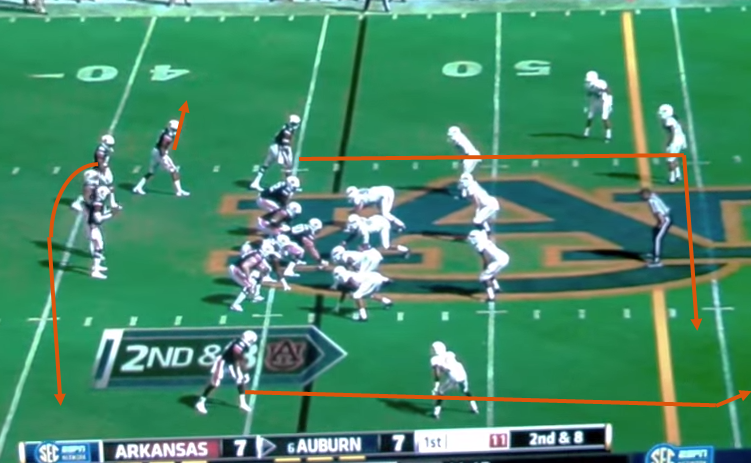 PA Statue of Liberty; Post-Dig combo: Sweep man (Grant) and slot receiver (Louis) run swing routes. Williams (top WR) runs a 10-yard in if the safeties stay back. Coates runs the post; he has the step, and draws a DPI flag.

A quick aside: one key to this play is that eventually the safeties will start overplaying the deep routes while the box defenders overplay the sweep. That's where the swing route by Louis comes into play. When it is ignored, it's a free first down. It is on the quarterback to make that read. 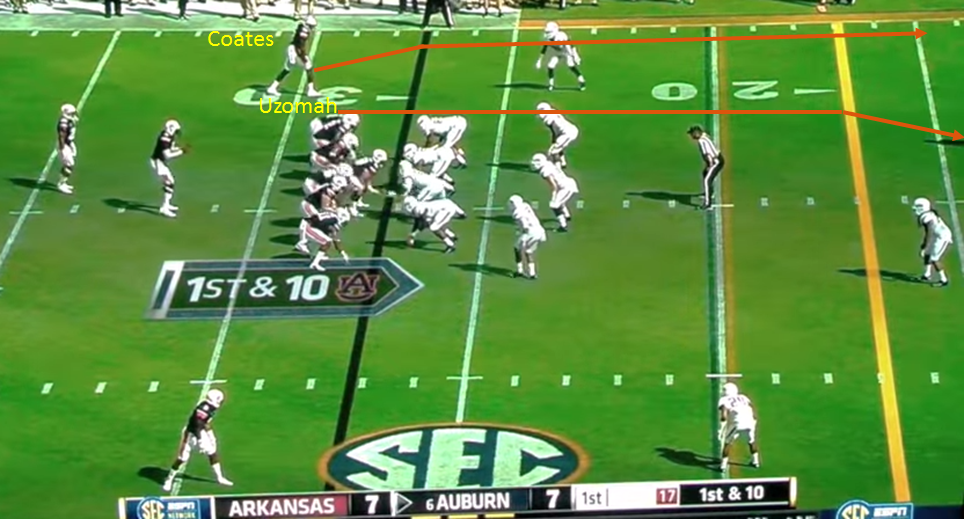 PA Counter, 4-verts: Two TE set, which is rare for Auburn last year (and would be even more rare for 2015). Young (RG) pulls to complete the counter play-action. All receivers get vertical. Top safety (only his shadow is showing) provides help on Coates. The top LB fooled by the PA, leaving a window to hit Uzomah. Good throw and an even better catch gives Auburn 1st and goal. Cameron Artis-Payne would punch it in from there. 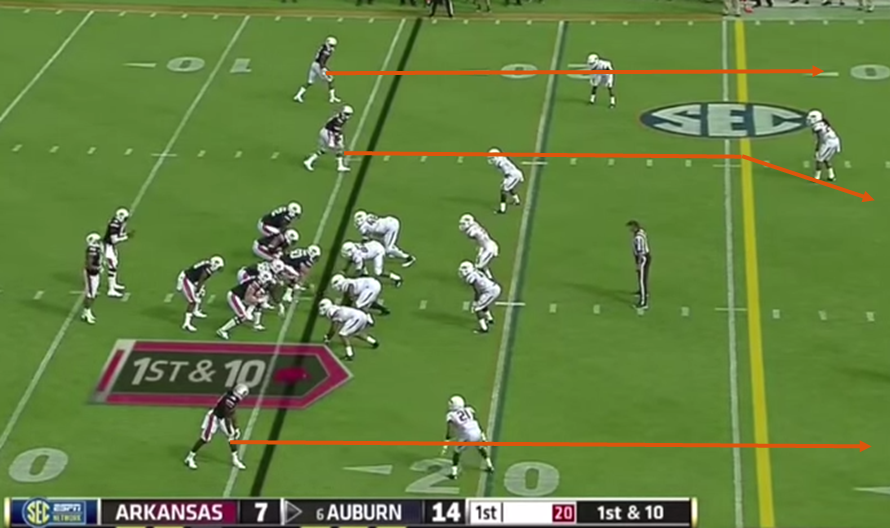 PA inverted veer; 9, bang-8, 9 route combo: Remember back on pass number 5 when I said "if only he'd hit Williams in stride"? Once again, the force defender follows CAP. The top safety allows Williams to get inside position, and this time Johnson hits him in stride. Safeties finally catch Williams on the Razorback 23.

One of the things that you'll notice in a Gus Malzahn attack during a game: if he finds something that works, he'll run it until you stop it, then run it one more time just to make sure you didn't get lucky. 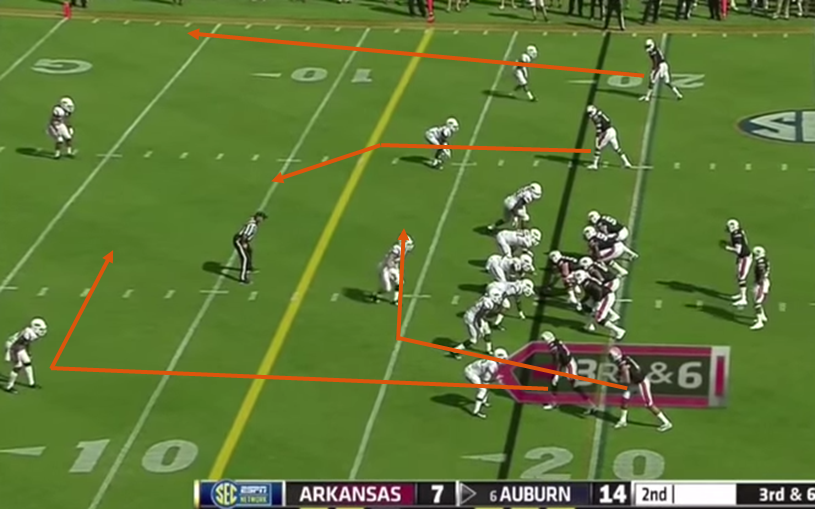 this is the same drive, but it is now the 2nd quarter

Drag + 10-yard in / Slant + Vertical: Same play as Johnson's 2nd pass of the game. This time Johnson's first read, the slant to Williams, is open because the defender bails. Johnson's pass hits Williams in stride, and he jukes the safety before carrying the nickelback into the end zone. 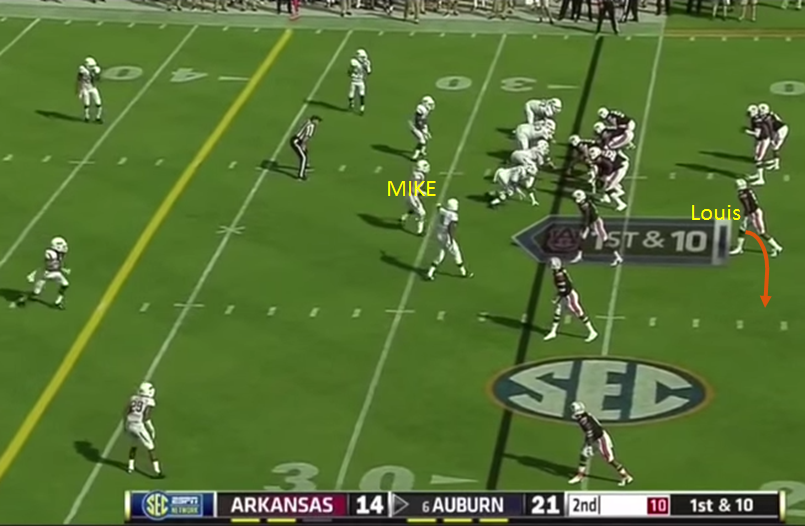 Slot WR Swing screen: First incompletion of the game. Louis just drops it. The Mike is unblocked, so perhaps Louis was worried about making him miss. 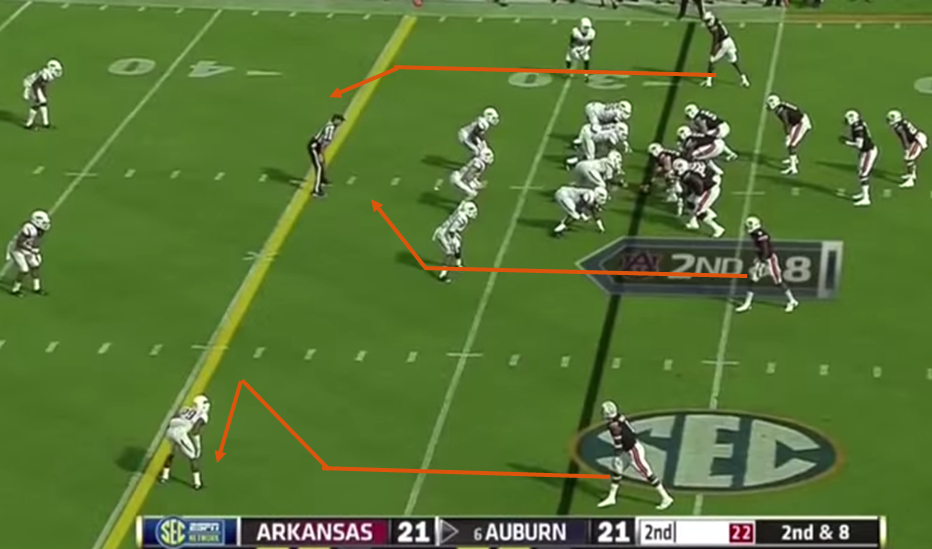 2-2-Q route combo: Coates and Louis both run slants. Williams seems to run a slant, but I think this is a Z-out (Malzahn calls it a "Q" route). Johnson hits him right in the pivot of the route, and he nearly picks up the 1st down by continuing outside.

Quads Left, Fake Screen; 9, Bang-8, 9: A twist on the inverted veer play-action route combination. Instead of IV, Coates fakes a screen, but he is ineligible in this formation. The vertical routes are meant to occupy the safeties and open up the short post. The three marked defenders are all fooled by the fake screen, and Williams is wide open behind them.

NOTE: This is the same play that worked for a big 3rd down conversion to Trovon Reed in the SEC Championship game the year before against Missouri. The principle is similar to what the New England Patriots did against Baltimore in the playoffs. A player you think would be eligible draws defenders, but he is never a threat. 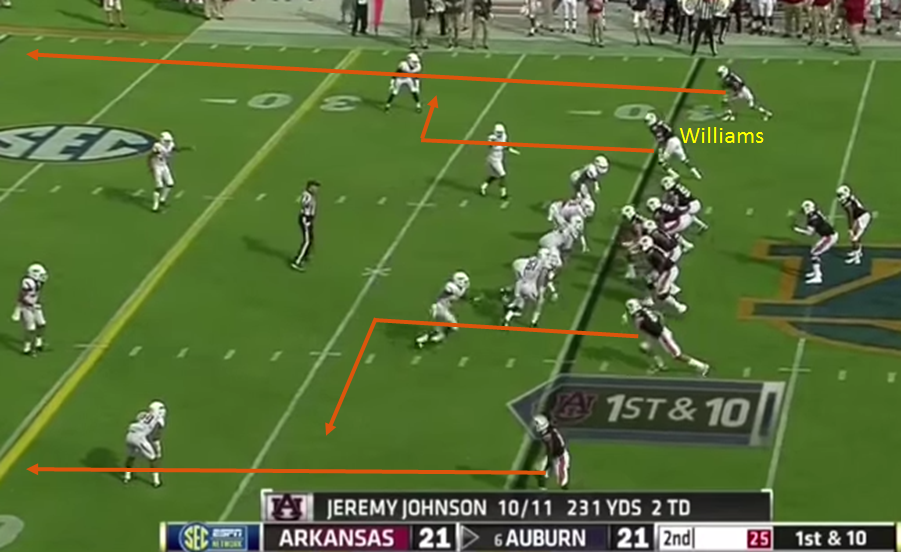 9-1-1-9 route combo: This is a Malzahn classic for when the clock is running out. Inside receivers (Williams and Uzomah) run 5-yard outs. Outside receivers get vertical. First read (Williams) is open. 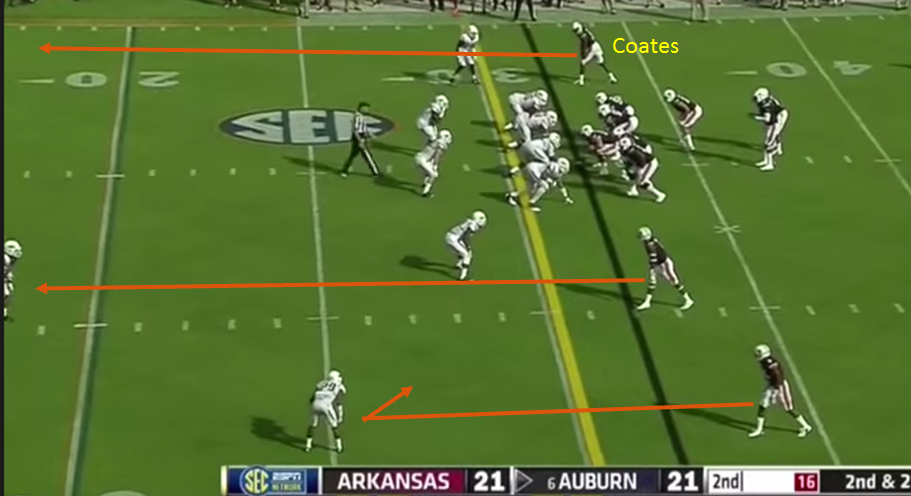 9-9-0 combination: This is the first play Arkansas really covers well. Cover-2 so they have both vertical routes covered, and the CB at the bottom handles Louis on the short curl. Coates tries to come back to the football, but Johnson throws just a bit too high. The camera doesn't show the slot receivers route, but he's jammed at the 25, and that throws off the route. 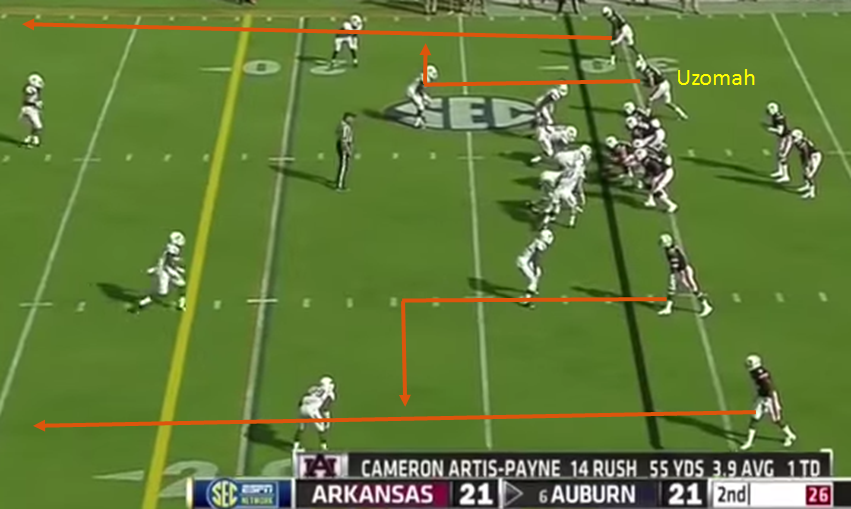 9-1-1-9: Auburn goes back to this one. The appeal is that if the defense overplays the 5-yard out, maybe the vertical routes are open. Unfortunately, Johnson misses an open Uzomah here. 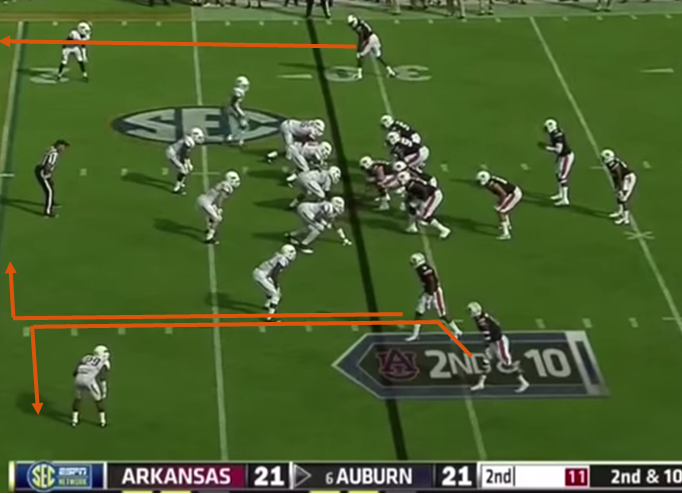 9-16(in)-16(out): Arkansas shows cover 1, and Johnson falls in love with the 9 route to Coates. Unfortunately, he misses to the outside. Williams and Louis are running follow square routes at the bottom. I think that would have been the better option, but you can't fault Jeremy for trying Coates in 1-on-1 coverage.

Fake double screen/drag-9: I'm not sure if Johnson throws the drag because both screens are covered, or if it was designed this way. Such is the limitation of armchair analysis. Either way, Williams gets what he can before a FG try.'

Hopefully this provides a little better idea of what Auburn might do with Jeremy Johnson next season. The exciting part to me is what Auburn might do outside of this. Gus Malzahn hasn't had a pass-first quarterback that he could rely on since 2009, and he's never had a pass-first quarterback with the kind of passing talent that Jeremy Johnson has.