Auburn football was terrible in 2012. Which teams are trying to replicate it?

In his first interview after being fired from Auburn, former head coach Gene Chizik tried to explain just what happened in 2012. He said several things just didn't work out well, like not getting any momentum from winning the close games or having to rebuild after losing so much of the roster after 2010. But the biggest reasons were the change in coordinators and the lack of an answer at quarterback.

No. 1, I'd always make sure that I had viable options at the quarterback position. And No. 2, I'd be very cautious in changing so much so quickly meaning coordinators and offense. 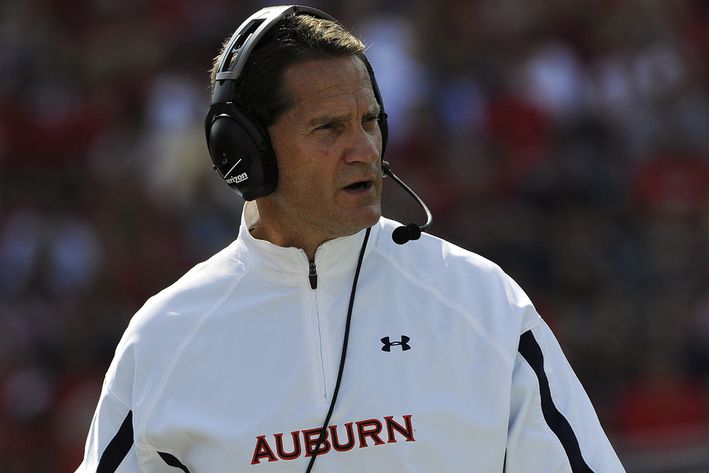 Undercover Barner: The Sky is Falling

After a mediocre 2011, Gus Malzahn took his hurry-up attack to Arkansas State as the head coach of the Red Wolves. Chizik replaced him with Scot Loeffler and his pro-style, "I coached Tom Brady" offense. Ted Roof also left (after likely being asked to leave), and took the defensive coordinator position at UCF (though he ended up at Penn State before the next season began). Brian VanGorder came over from the Atlanta Falcons to be the defensive coordinator at Auburn. Finally, quarterback Barrett Trotter decided to forego his senior season and open a Sonic pursue a career in football coaching and scouting. Clint Moseley and Kiehl Frazier were the only real options left.

It was like those creative desserts you see on Pinterest. You try it out yourself with grand ideas of impressing your family and friends, but it ends up looking like something that wishes it had never been born. Gene Chizik tried to put together a beautiful pro-style team and ended up with this. Nailed it.

This year, Auburn has a new defensive coordinator, but the offensive staff remains intact. And though Nick Marshall will no longer take snaps, everyone expects Jeremy Johnson to be at least a "viable option" at quarterback.

So, why bring this up? Well, I guess this is more of a PSA for fans of other FBS teams that are facing the same circumstances Auburn did in the spring of 2012. After all, there was a time right before the 2012 season started when 58% of you thought Khiel Frazier was going to take the reins of the offense and reach his five-star potential. (Okay, okay, not YOU. Probably.) And Chris Fuhrmeister himself thought Scot Loeffler would leave Auburn as a home run hire for someone else. (What a knucklehead.)

So which teams are following "Gene Chizik's Recipe for Disaster"?

Six teams have been ranked from least likely to most likely to be a disaster and paired with a food fail image to represent just how disastrous next season could be. If I missed a team that replaced both coordinators, tell me about it in the comments. We need to know.

George O'Leary, one of the best "group of five" head coaches, has his work cut out for him this year. UCF has had a good offense the last few years thanks to Charlie Taaffe, and the Knights hope to keep the momentum after his retirement by promoting Brent Key. He's been part of the program since 2005 and has been rumored to be the head coach in waiting. UCF fans are hoping this sort of continuity pays off like it has for Oregon from Mike Bellotti to Chip Kelly to Mark Helfrich.

Last year's defensive coordinator, Tyson Summers, left for the same position at Colorado State and was replaced by Chuck Bresnahan. The fans aren't very excited. He has coached in the NFL for most of his career and his most recent college job was as defensive coordinator for the hated rival USF Bulls.

The quarterback situation didn't sort itself out last season until the first real game against Penn State when Justin Holman took over for Pete DiNovo. Holman led the Knights to a near upset of Penn State and then started 11 more games. There is no question who the starting quarterback will be this year.

A promotion from within at OC, an uninspiring hire at DC,  a good returning QB.

UNC replaced offensive coordinator Blake Anderson with Seth Littrell and there is some question of just how much the offense might change under a coordinator with an Air Raid background. The hope is that the offense will just be a compromise of the old and the new, considering the offense finished third in the ACC in scoring offense and its second team All-ACC quarterback returns. We'll see.

Turns out Phil Steele has led me astray. Seth Littrell has been with the Tar Heels since before last season.

UNC also got a new defensive coordinator when it hired, as fate would have it, Gene Chizik himself. The blogs have quickly pointed out that his defenses did much better with him as coordinator rather than head coach. They are also excited about the wholesale staff changes on that side of the ball, complete with a "nowhere to go but up" outlook on things.

The quarterback situation, as hinted at earlier, is a pretty good situation. Marquise Williams is returning for his senior season and even if he's unavailable for any reason, the backup, Mitch Trubisky, had a fair amount of playing time last year.

A possibly compromising OC, a coin flip at DC,  a high quality QB.

Bob Stoops hired Lincoln Riley away from ECU to replace Josh Heupel and Jay Norvell as the offensive coordinator. He is another Air Raid coach getting a shot at a power five program. As the new offense has been installed in Norman, players have talked about just how fast and simplified it is compared to last year's offense, but they'll also be quick to say it is a physical offense, too. Of course it is.

The defensive changes have been interesting to say the least. Mike Stoops had been the defensive coordinator for years, but Jerry Montgomery, the defensive line coach since 2013 got promoted to share the coordinator position with Stoops. Just what impact this would have made will never be known. Montgomery left Oklahoma for a job with the Green Bay Packers, and the DC role again belongs solely to Stoops. Though not exactly according to the recipe for disaster, I think the turmoil involved is a good ingredient substitution, like using plain yogurt if you're all out of sour cream or something.

Trevor Knight couldn't carry the Bama-beating momentum from the post 2013 Sugar Bowl over into 2014. Instead, injuries halted a promising start to the season. This season, Knight is hoping to win the starting role back, but Texas Tech transfer Baker Mayfield is gunning for the job, too.

When Dave Christensen left Utah to be the running game coordinator at Texas A&M, head coach Kyle Whittingham filled the offensive coordinator role with two people. Aaron Roderick has been on the Utes coaching staff for a long time, moving up and down from positional coach to coordinator and back again. He'll get another shot at coordinating the offense in 2015, but alongside Jim Harding, last year's offensive line coach, so there shouldn't be much of an offensive shift.

Last year's defensive coordinator Kalani Sitake left for the same position at Oregon State, so Whittingham brought John Pease out of retirement for the second time. A former Ute player, Pease coached the Utah defensive line in 2009 and 2010 after his first retirement and then retired again until now. Utah fans know he's a good coach, but he's seen as a stopgap and certainly not a long term solution.

Travis Wilson returns for his senior season with Kendal Thompson backing him up. Wilson put up good numbers, but he did most of his damage against undermanned teams out of conference. No quarterback played well against PAC12 competition and it would have been worse without a strong running game, something the Utes might not have this season.

A promotion from within at OC, a formerly retired stopgap at DC, an underwhelming QB

Vandy went for two big coordinator hires after last season but only one worked out. Andy Ludwig left his offensive coordinator position at Wisconsin for the same position in Nashville, though he hung around the Badgers long enough to beat Auburn in the Outback Bowl. Commodore fans seem very excited about him bringing a power based run game and a more efficient passing game. Wisconsin fans don't seem too upset though.

The other big hire didn't pan out. Mason had New Orleans Saints secondary coach Wesley McGriff lined up to take the defensive coordinator job at Vanderbilt, but McGriff decided to stay in New Orleans at the last moment. So instead, Derek Mason will coordinate the defense himself. That was his role at Stanford before taking the Vandy job, but how often does the head coach officially coordinate as well?

Last year's quarterback position was a revolving door of players as the Commodores never found a reliable starter. Two of the four who started games last year have left the team with eligibility remaining. Patton Robinette is avoiding more injuries and pursuing medical school. Stephen Rivers has been released to transfer with immediate eligibility. That leaves two players who didn't do enough to win the job last year, a freshman who did okay in the spring game, and another freshman who hasn't arrived on campus yet. Vandy fans can't feel too great about that.

USF fans were excited to hear offensive coordinator Paul Wulff had been replaced with Danny Hope, a coach with a more open offense than what had become the norm under head coach Willie Taggart. But receivers coach David Reaves was promoted to share the coordinator title with Hope and Taggart has apparently taken back play calling duties, so now fans worry that any real offensive progress will be hampered.

There was drama on the other side of the ball. As mentioned above, the Bulls' defensive coordinator left to take the same job at rival UCF. It's been taken by the fans as a huge middle finger. Regardless, his replacement is former Ole Miss linebackers coach Tom Allen. It's too early to know how things may change under this first year coordinator, but there did seem to be improvement in the spring game. Of course they were facing the USF offense, so who knows?

Last year's most effective quarterback, Mike White, was third in line during the spring game and has since decided to transfer. The change in offense apparently wasn't going in his favor. Now, the likely starter is Steven Bench who transferred in from Penn State last year but couldn't win the starting role. Sophomore Quentin Flowers could also be in the mix, though he has quite the lack of awareness.

And considering some fans have already given up on the season...