This win was good for the soul. Maybe this is Mullen's worst team since he arrived in Starkville, but I think you have to go back to the Jefferson Pilot days to find an Auburn beatdown of a State team like this. Feels good, man.

In that regard, my biggest takeaway this week was the formations Auburn used. For all of Malzahn's tenure, Auburn has been a 2 back, 3 receiver team 90% of the time. It was terribly boring to chart. You'd see occasional 4 WR sets on obvious passing downs, but that was it. That's now a thing of the past. Auburn must have found something they liked in the 6 OL look, because we saw it a lot in this game, and not just at the goal line this time, but in the middle of the field as well.

To make matters even more interesting, Auburn showed they weren't afraid to throw out of that look as well. We also saw a smaller number of 4 WR sets on non-obvious passing downs. And the cherry on top was the double H-back sets on the final drive with Franklin and Truitt. The game changes so fast as defenses get comfortable with what you like to do as a team, so I love seeing Auburn showing the willingness to mix things up. Take a look at this formation for goodness sakes: 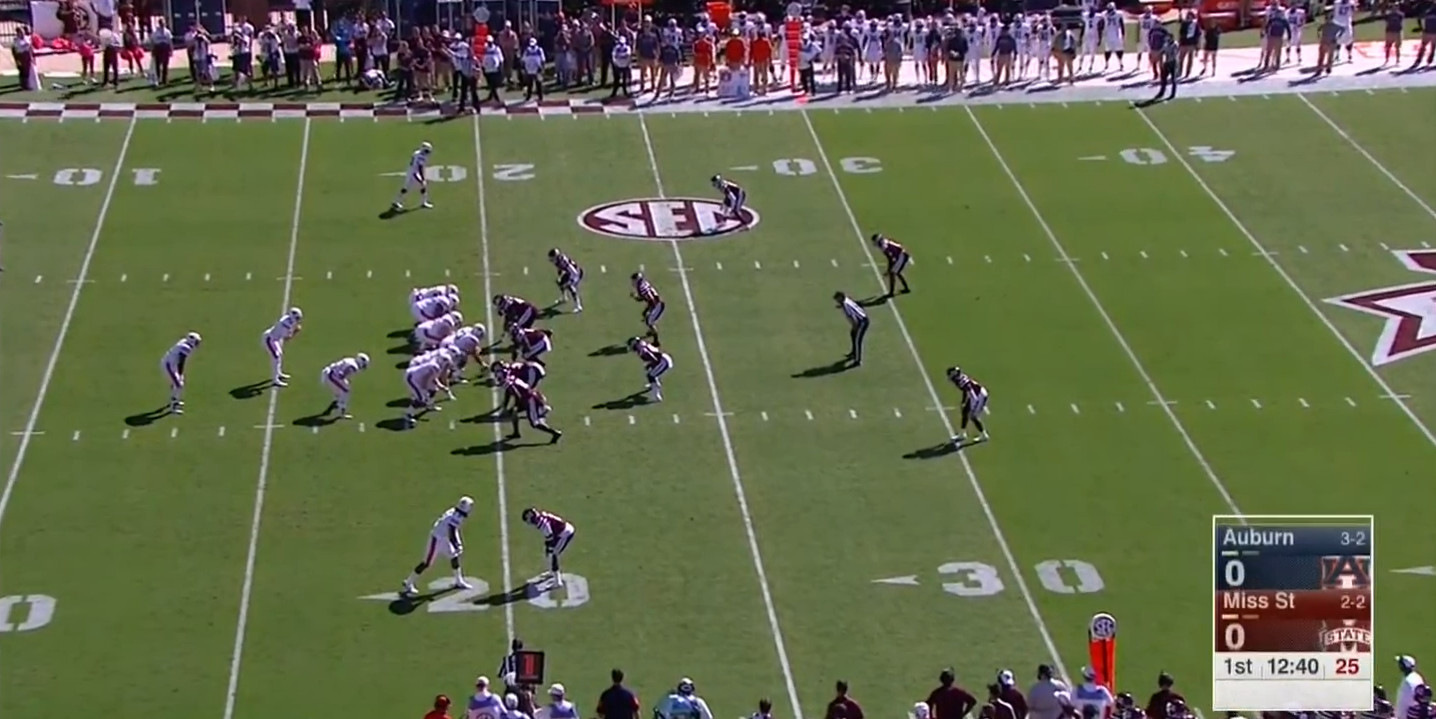 If you just line up the backs, then that's an I-formation that Les Miles would be proud of (God rest his coaching soul). Oh, and by the way, this play ended up being a throw. I'm seriously loving this.

So let's visit the red zone again, shall we? 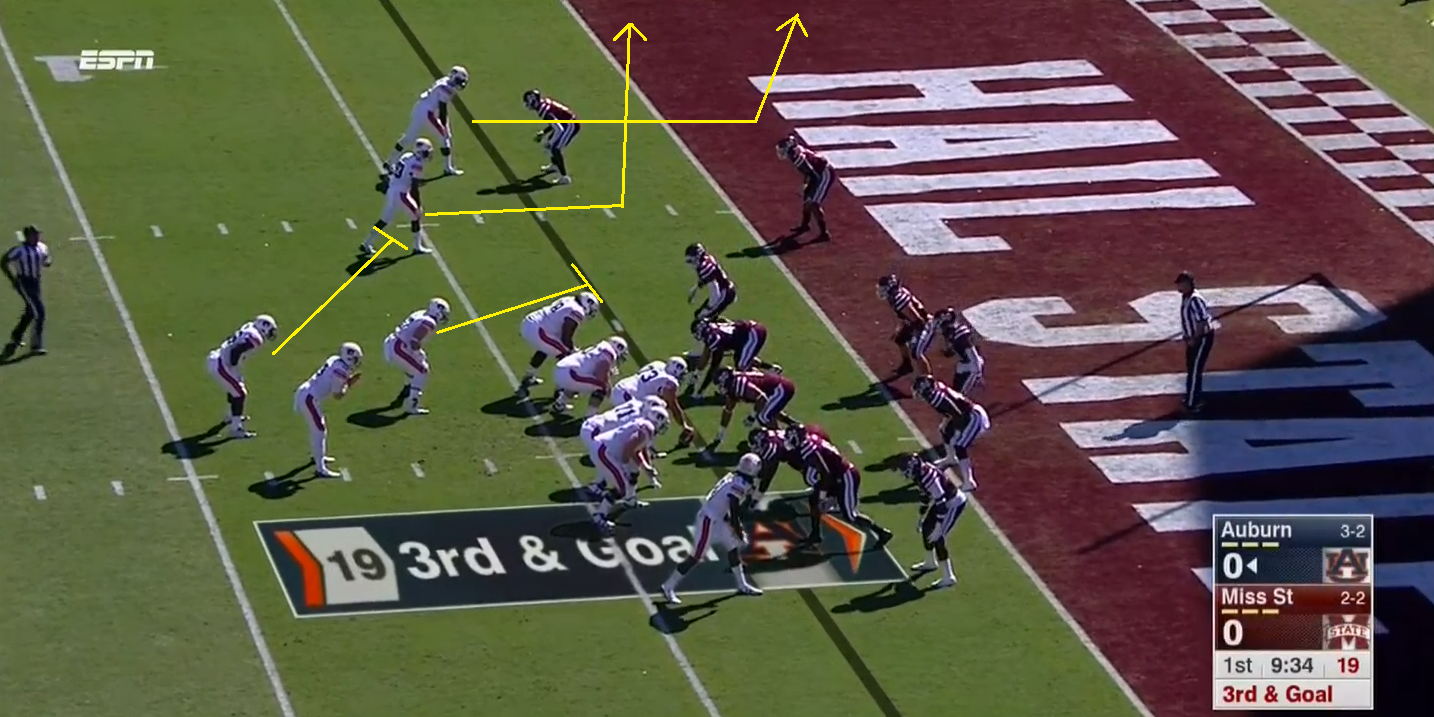 Here we'll see another rollout by White to the top of the screen. Pettway and Cox provide protection and Ryan Davis catches the TD pass, but Slayton (at the very top of the screen) is the MVP of this play. He pushes out and ends up occupying two defenders with his pick. 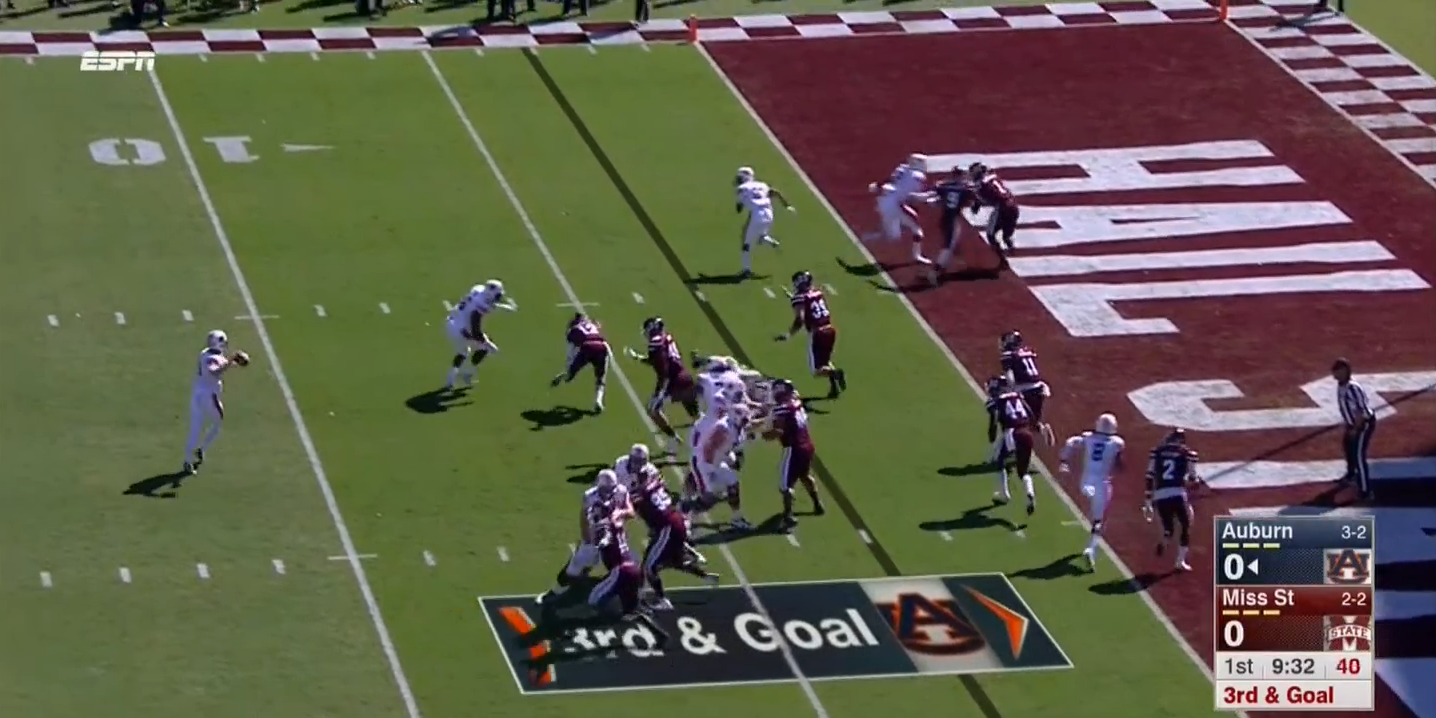 Sure, he's totally trying to run a route to the corner (wink wink, nod nod). Meanwhile the SEC leader in completion percentage is going to hit a receiver that wide open every time.

Auburn's dedication to the inside zone is starting to open up some possibilities in the play book too like this gem:

With the pulling guard pass protection and the play action to Pettway, I can't fault all three linebackers from looking at the run. I would too; it looks like Auburn's bread and butter run game. Unfortunately for State, White keeps this and hits Kyle Davis in a giant hole in the middle of the field for 17 yards. As much as I praise White's accuracy, when Lashlee is mixing up the playcalls this well, he's making it easy for White.

Back to the red zone again. While Auburn has been living on the inside zone runs up the middle, they've been throwing in a few changeups every now and then and a lot of those have been toss sweeps. 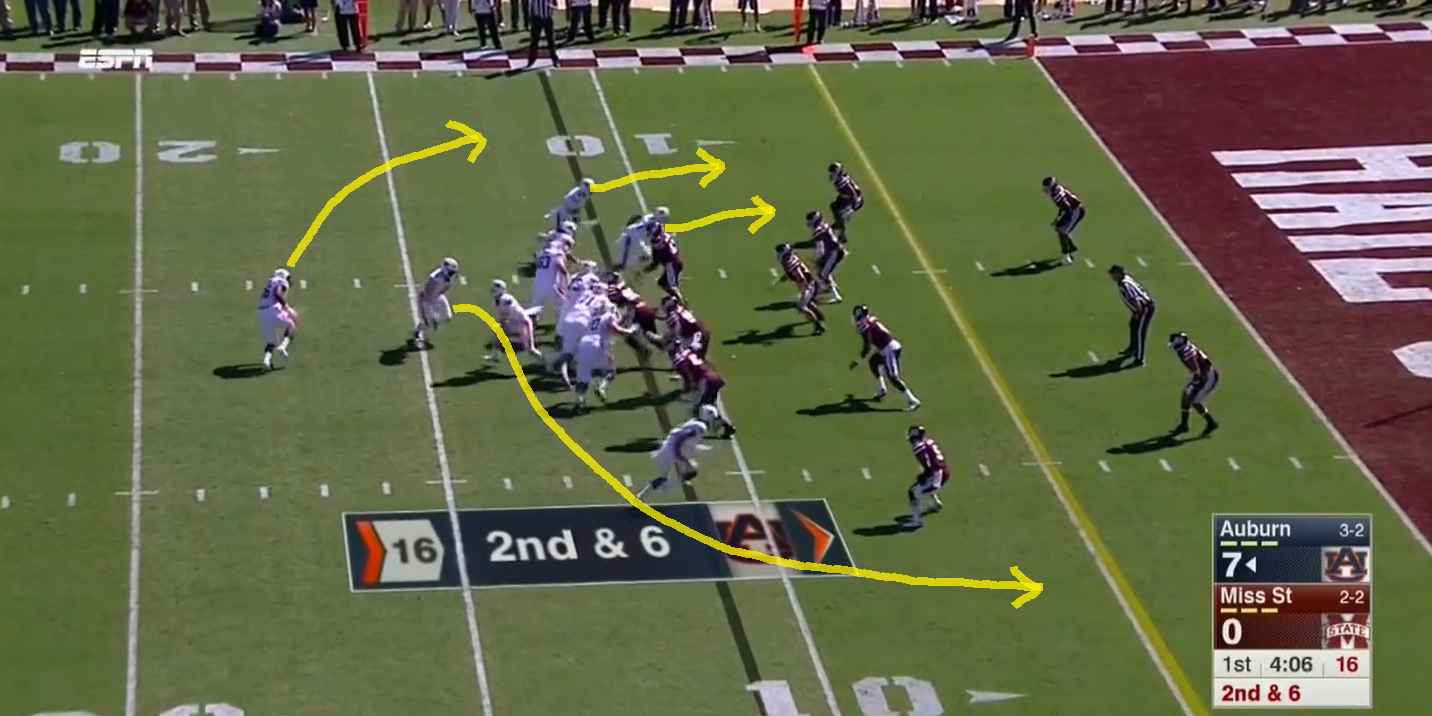 So Auburn shows toss sweep to the left with two receivers and Cox lined up on that side. Immediately after the snap, the whole defense is looking to that side. Meanwhile Cox sneaks out the opposite side, and by the time White throws him the ball, it's already too late. He'll take it to the 1 yard line:

Granted, this play is old as the hills (I feel like Arkansas runs it 20 times a game), but what's impressive about it is the timing of the call. State had seen toss sweeps on the Auburn film, but they hadn't seen Auburn do this. If Lashlee can keep things this fresh for opponents as the season goes on, Auburn's going to produce a lot of points.

- While Auburn is still committed to the conservative run game up the middle, there were a couple of outside runs with pulling guards again, something we haven't seen much at all since Lashlee took over. I suspect Lashlee is willing to call those plays against an opponent with State's level of defensive personnel, but when we face another defense with speed like LSU again, those will be absent, but we'll see.

- Sean White is crazy accurate, but I feel like the receivers need some praise too. Aside from Stevens unfortunate miss that turned into an INT, I didn't see any bad drops.

- Auburn threw about 20% of the time on first down in the first half. Lashlee especially demonstrated the willingness to do this early so I guess I'll forgive a number lower than I'd like.

- I know this isn't offense, but the secondary deserves some praise. We rightly praise the D-line and we're all excited to see linebacker play at this level again, but the secondary has been excellent too. I counted 6 pass breakups, not including the interception. They're contesting everything and making nothing easy. State's big receiver Ross was a complete non-factor.

- The State players were none too happy with Auburn restoring their place above them. They were especially chippy with their personal foul flags, cheap shot at Carlson, and a disgustingly cheap blind side block that wasn't called for targeting. I don't care if it was or wasn't targeting but it should have been unnecessary roughness; there is no reason to level a defender like that who has pulled up to avoid hitting the QB out of bounds.

So once again, I'm advising optimism. Auburn is going back to the future by abandoning some of Gus' old bells and whistles and embracing some really basic plays. Lashlee knows you can get some misdirection without the risk of some of Auburn's old plays. I feel like they found their offensive identity in the LSU game, and now Lashlee is starting to build a good playbook around it. If Auburn can handle Arkansas in two weeks, then we're looking at a 7 or 8 win team before the bowl game at least. I don't think I'm being too much of a homer by saying I wouldn't want to play Auburn right now if I'm a fan of another SEC west team. WDE

*EDITOR'S NOTE: This is in reference to Kanell getting very defensive and digging in his heels due to being called out for his ignorance on Twitter.

**This is the final FanPost version of these, as I'm going to elevate Mr Dent's work to Author status here on the site. These have been fantastic, and whether he can do them every week or not, they deserve to be published as official pieces of work on the site and promoted as such.