The Tigers picked up a monumental victory last Friday and prepare for the final home meet, tomorrow night.

This past weekend, the Auburn Gymnastics team traveled to Athens, Georgia for their last regular season SEC match-up. To put it bluntly, the girls were on fire. The Tigers defeated the GymDogs with (another) season-best and a new record road score of 197.325 to 197.275. This was the first time Auburn had ever earned a win at Georgia and was only the fifth time the Tigers have beaten the Bulldogs in total. The first time Auburn earned a win was in 2010. Last year, the Tigers beat the Bulldogs a total of three times – at home, at SECs, and at NCAAs. Talk about a big change over the last few years!

The Tigers started the night on the uneven bars. Although there was a mistake in the line-up, the team recovered well and posted a big score of 49.35, led by Sophomore Abby Milliet who scored a 9.95. Senior Kait Kluz also had a great routine and she was rewarded with a 9.90. The girls were hitting handstands and sticking dismounts, otherwise known as the equation to uneven bars success.

Vault was the next event and Auburn kept rolling. They posted their highest vault score of the year, which was a 49.375. This time, it was Junior MJ Rott who “wowed” the judges. Rott performs a full-twisting Yurochenco (FTY) vault. Just this year, that vault was devalued from a 10.0 to a 9.95. The NCAA gymnastics community de-valued a few vaults in order to encourage more difficulty and differentiation on that particular event. So, the best score MJ could’ve earned was a 9.95, which was exactly what she received. It was one of the most beautiful FTYs I have ever seen. It deserved the perfect score. The rest of line-up all received a 9.8 or better.

On floor, the Tigers seemed to have some trouble settling down and controlling their power during their routines. Regardless of the fact that some of their landings were off, the team still managed to score a 49.3, which was boosted by Junior Kullen Hlawek’s 9.90 score in the second position. The lowest score the team earned was a 9.825. Not too shabby for an “off” day.

Finally, Auburn headed to beam: the stress event on the road. At this time, UGA had already messed up more than a few times, but you wouldn’t have known judging by the scores they were given. The scores were tight, and the home team was going to their last event, meaning scores had the potential to soar. None of that mattered to Auburn, though. Why? Because, well, we’re just so much better than UGA. The girls hit six-for-six on beam, stayed completely under control, and posted a strong score of 49.3 to win the meet. As usual, Senior Caitlin Atkinson finished with a beautiful routine in the anchor position to earn a 9.925, which was a tenth more than she needed for Auburn to win the meet. That’s what I like to call composure. 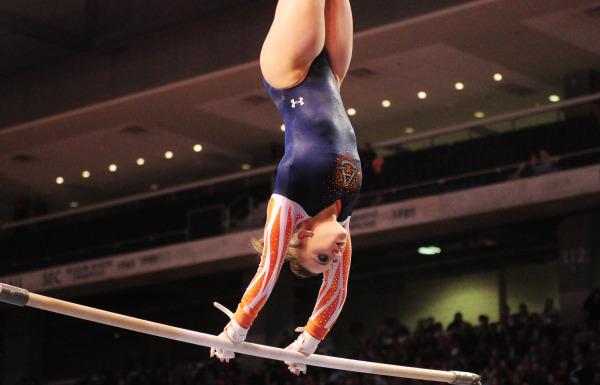 With one meet left in the regular season, let’s take just a moment to reflect on the team’s success this far. They’ve had a number of record-breaking scores, namely out-scoring themselves time and time again while on the road. The Tigers barely skipped a beat after two freshmen went down for the year, showing their determination and how well-prepared the alternates had been (which led to a huge entrance onto the competitive scene for FR Sam Cerio). They’ve hung with some of the best teams (LSU) and defeated tough SEC competition (Bama, UGA, Mizzou, and Kentucky). The girls have posted huge individual scores and have reigned in amazing Auburn crowds. Finally, they’ve earned the highest ranking we’ve seen in decades; they’re currently ranked No. 7!

Now, it’s (sadly) time for the last home meet, and it’s time to honor this incredible senior class. This Friday (March 11th), the Tigers will host Arizona St. at 7 pm. Here are just a few reasons why you should be there this Friday: