Reading way too much into what car Gus drives.

Share All sharing options for: Zone Read Between the Lines: HUNH Hybrid

The HUNH. It's synonymous with Gus Malzahn. [Insert obligatory he wrote the book on it comment.] He's even tried to trademark it. His offenses do best when running at a high tempo while his poorest ones, 2011 and 2015, were deliberately slow.

So, though it's to be expected to see Gus say things like this, it's exciting, too.

Auburn coach Gus Malzahn: Establishing tempo all about making it priority this spring with coaches, players

After last year's poor pace and, if we're being honest, 2013's and 2014's irregular pace, I know we all hope to see lightning-fast play on the offensive side of the ball. For one thing, it means the offense is being successful. For another, it means Gus and his offense are getting back to his roots.

You may be asking, "How is the offense gonna go that fast with all the new faces out there?". Gus actually touched on that in his last press conference.

Using one player to fill multiple roles is a big part of the equation. H-backs carrying the ball. Running backs taking direct snaps. A crop of sure-handed receivers that can also run the jet sweep. Oh, and a dual-threat quarterback doesn't hurt.

Anything else that could help Gus reach his tempo goals? Something that he's obviously thought about before but didn't have the nerve to try? Something that middle-aged men do to feel like they're 18 all over again?

Gus Malzahn on his new and sporty BMW i8. 'I never had a sports car. I turned 50. I figured it was time to go ahead and get one.'

I know, I know. The offense can't hop in and drive down the field. That kind of Hurry-Up might actually injure somebody, BERT. Obviously, Gus felt he needed a sports car to help him feel fast again, to feel young again. Back when he could dance like no one was watching and brag about his killer passing offenses.

But that's not all. Of all the hot-rod sports cars in the world, Arthur Gustav "Gus" Malzahn, III picked a German-made BMW i8. (Of course he did.) So what can we learn about Gus' 2016 approach to the HUNH from this mid-life crisis purchase?

Excuse me while I make it painfully apparent I know nothing about cars. All stats, figures, pictures, and other info from Wikipedia.

Look, this makes it painfully obvious Gus is tired of emissions. And by emissions, I mean smoke. And by smoke I mean "where there's smoke, there's fire." And by that, I mean Gus is tired of the drama that comes from receiver rampages, things not being Gucci, etcetera, etcetera.

Auburn's football program hasn't had any NCAA trouble since Gus got here and Roopstigo is more focused on writing biopics, filming documentaries, and marketing a cramp prevention supplement these days, so things are mostly going well, but if Gus' sports car is going to be a hybrid, he must want to run one of the cleanest programs in the country.

Gus has some new tricks up his sleeve.

One of the best things about Gus' offense is the amount of eye candy, window dressing, wrinkles, gadget plays, trickeration, and all other forms of deception he sprinkles into each play.

To some of you, the very idea the i8 is run at least partially on battery power is proof enough that this car is nothin' but a high school offense doesn't belong with the other sports cars, but those of you more open to innovation will appreciate some of the extra features that set it apart.

In the eye-candy category, the i8 has butterfly doors. I'm not going to say whether that's cool or not, but it sure is different. 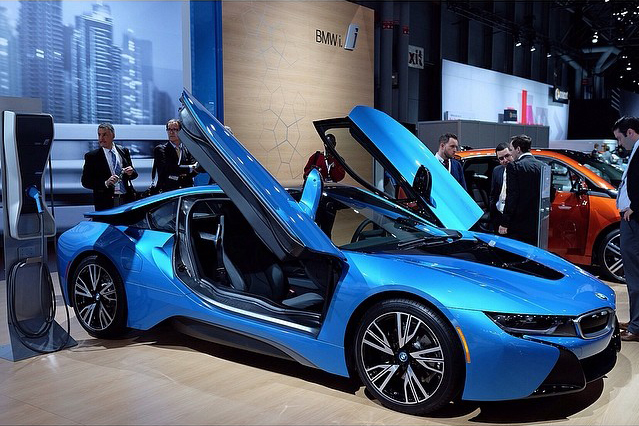 In the deception category, the i8 has false engine noise. A battery-powered car announcing to the world it's guzzling gasoline? A pass play disguised as a run play by the actions of the offensive line and running back? I think Gus is looking for some inspiration for his play action game.

Finally, laser headlights are the very definition of a gadget play if I've ever seen one. BMW literally took a perfectly adequate device and added a gadget to it, mostly so it sounds cool. That's literally the only reason to ever put freakin' laser headlights on a... Oh. Turns out they help the driver see further, which makes sense if the car is going faster. Still, gadget play.

The timing couldn't be better.

"The initial turbodiesel concept car was unveiled at the 2009 International Motor Show Germany."

Gus' initial HUNH concept offense on the Plains was unveiled in 2009.

"The production version of the BMW i8 was unveiled at the 2013 Frankfurt Motor Show."

The zone read heavy version of Gus' HUNH was unveiled in 2013.

"The special-edition BMW i8 Protonic Red Edition model will be unveiled at the 2016 Geneva International Motor Show."

Wrong color, but hey, I'll take a special edition of the HUNH in 2016.

So Gus, enjoy the sports car. And hopefully the speed and innovation of your new ride make their way to the field this fall.