Auburn is the #1 seed in Ann Arbor and will be aiming to make it back to the NCAA Championships tonight!

This coming Saturday, April 2nd, the Auburn Gymnastics team will fight for the opportunity to make history once again. The Tigers will be competing against five other teams for the chance to compete at NCAA’s in Fort Worth, Texas in two weeks. The 2016 team has been fierce. They have the highest Regional Qualifying Score in school history. They’ve earned legendary wins against Alabama (at home) and UGA (in their house). Senior Caitlin Atkinson has been absolutely on fire, after earning several All-American nods, becoming a finalist for the AAI Award (think of it as the Heisman of gymnastics), and was named SEC Gymnast of the Year. As a whole, the team garnered the No. 1 seed at regionals, which is another first.

With this record-breaking season (which seems to be the new norm for women’s sports on the Plains), the Tigers have become known as one of the most dangerous teams of the year. However, that does not mean that the road ahead is going to be easy. In my opinion, Auburn actually drew the hardest regional a No. 1 seed could have had.

Joining Auburn at the Ann Arbor regional will be: No. 7 Michigan, No. 18 Stanford, No. 24 Eastern Michigan, No. 25 Penn State, and No. 33 New Hampshire. Regionals in gymnastics are based on a snake seeding like this:

Because of this seeding, the only regional that is normally even somewhat unpredictable is the first group, which contains the No. 1, No. 12, and No. 13 ranked teams. There’s typically not much of a difference the No. 12 and No. 13 teams, making it anyone’s game. However, this year, the group Auburn has been placed in is actually considered very unpredictable. Although our Tigers have done an amazing job setting themselves up for post-season, they can’t do much about the difficulty of their regional. Michigan is a great team and is very reasonably matched Auburn. However, it’s No. 18 Stanford that throws a wrench into the mix.

Stanford is known for being underwhelming in the regular season, but impressive and tricky in the post-season. Stanford’s RQS is only a 196.355 in comparison to Auburn’s 197.15. Stanford does have a star athlete, Elizabeth Price, who is actually tied with Caitlin Atkinson in the All-Around rankings. However, they don’t have the overall quality of gymnastics, finesse, or fire that Auburn possesses and to be honest, we’re just a much better team. The danger comes in Stanford’s ability to rise to the occasion and compete under pressure. Just a few weeks ago, they upset both Utah and UCLA (ranked fifth and eighth, respectively) with a 197.40, which is a higher score than Auburn has achieved all season.

So, what does this mean? The bottom line is that our Auburn Tigers need to be on on Saturday. They must be focused and they must recognize that they really have earned their ranking. Now’s the moment when Auburn has to embrace the role of a championship team, rather than their typical underdog standing. Auburn has very capable gymnasts, who are fueled by their love for the sport and their love for competition. All they have to do is harness that energy, do what they known how to do, stay in the bubble and have a little fun. 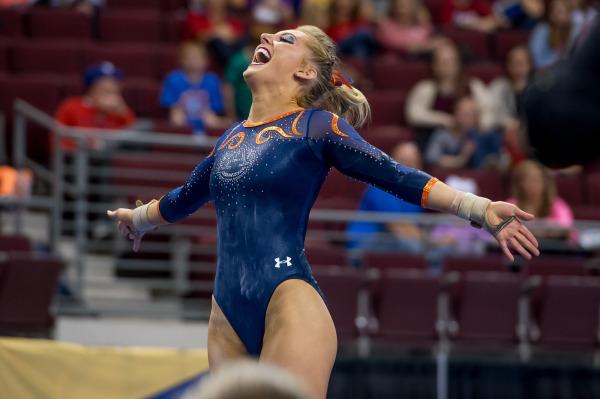 I expect to see a tough competition on Saturday, but I do expect the meet to be favorable to our young squad. Head Coach Jeff Graba knows how to lead a team to the National Championship, and he knows how to help the girls perform under pressure. The seniors know this scene very well, and have been nothing but reliable and steady for the up-and-coming youngsters. I cannot wait to watch the girls hit routine after routine and qualify to NCAAs for the second year in a row. You can watch the meet live at the following website: http://www.mgoblue.com/collegesportslive/?media=528688. The action starts at 5pm CT, so don’t miss it. War Eagle!