Baseball season is just a few months away on the Plains, and when fans come to experience baseball at Auburn, they're going to once again be treated to the Best Fan Experience® in the nation.

As the official site notes, Auburn's baseball stadium has consistently received accolades as one of the best parks in the nation, and with good reason. It combines so many elements of great ballparks around the nation. Today, the school announced upgrades that will be completed prior to the opening pitch of the 2017 season. These upgrades include:

Since most of the baseball games I've attended have involved standing on the parking deck, I'm not sure how much the seating replacement was needed. I never had issues with the seats for the games I've gone into and watched. Sound and lights are always good to upgrade, too.

Then there is the video board.

First, let me say that the park really needed a new video board. The old one was nice when it was added in 2002, but at 16' x 12' it wasn't the greatest in terms of size, plus it was an old matrix board that's not capable of handling the things modern boards can. The ability to show full HD reviews of plays is definitely going to help the "fan experience." If nothing else, it'll help fans get even madder at perceived blown calls. I do hope they keep the clock and the brick support structure, though.

I just have to laugh at the addition of another new video board to an Auburn Athletics facility.

You see, it seems as if every

A few more photos of CFB's Largest Video Board. Who's ready for some Auburn Football?! #36Days #WarEagle pic.twitter.com/3M21xioCMN

The brand new video board at @Auburn_Softball's Jane B Moore Field is big ... one of the largest in the country. pic.twitter.com/VJtuQm2RS6

The video board is up and running!! We CANNOT wait to open the season Friday!!! #LookAtAuburn #WarEagle pic.twitter.com/VpE9VJ6QqS

Come watch your favorite team kick it around tomorrow night at 7 pm and check out the new video board! #WarEagle ⚽️https://t.co/eAPNyPB68T 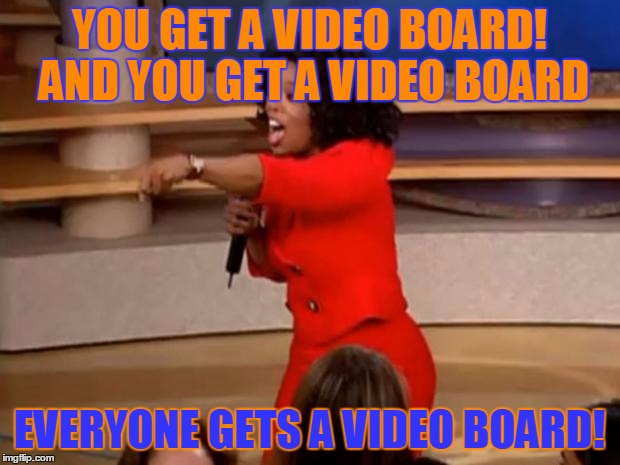 I haven't seen anything relating to a new basketball board, yet. I'm going to walk over to the Arena in a few minutes and check just to see if there's something I've missed, though. Clint is pretty up-to-date on any changes, so I trust him.

Were the upgrades needed? Yes, they were, and it's awesome that they're happening. I just still can't help but laugh that this is the big upgrade we're doing to nearly every facility.

Baseball season begins Friday, February 17th against George Washington. Be there to see the new additions!