**Updated in Part 2 after much good discussion.**

Either Gus gets the credit for all of his QBs, or he doesn’t. On the plus side, Jerry gives Gus credit for Chris Todd, Cam Newton, and Nick Marshall. But Jerry gives Gus a pass on Clint Moseley, Kiehl Frazier, Jeremy Johnson, and John Franklin III.*

Can Gus Malzahn develop quarterbacks? Are his tenures any different from other periods in recent Auburn history? I took a look at the last 16 years of data to find out.

I used quarterback rating as a proxy for overall quality of play, and built a chart of rating vs. season year. Each quarterback who played more than one season in the period from 2000-2016 has a line. White dots represent seasons with less than 10 attempts per game on average, filled dots vice-versa. Seasons with only a single attempt, such as Kodi Burns' single TD pass in 2010, are excluded. Coaching progression is represented by a yellow line. 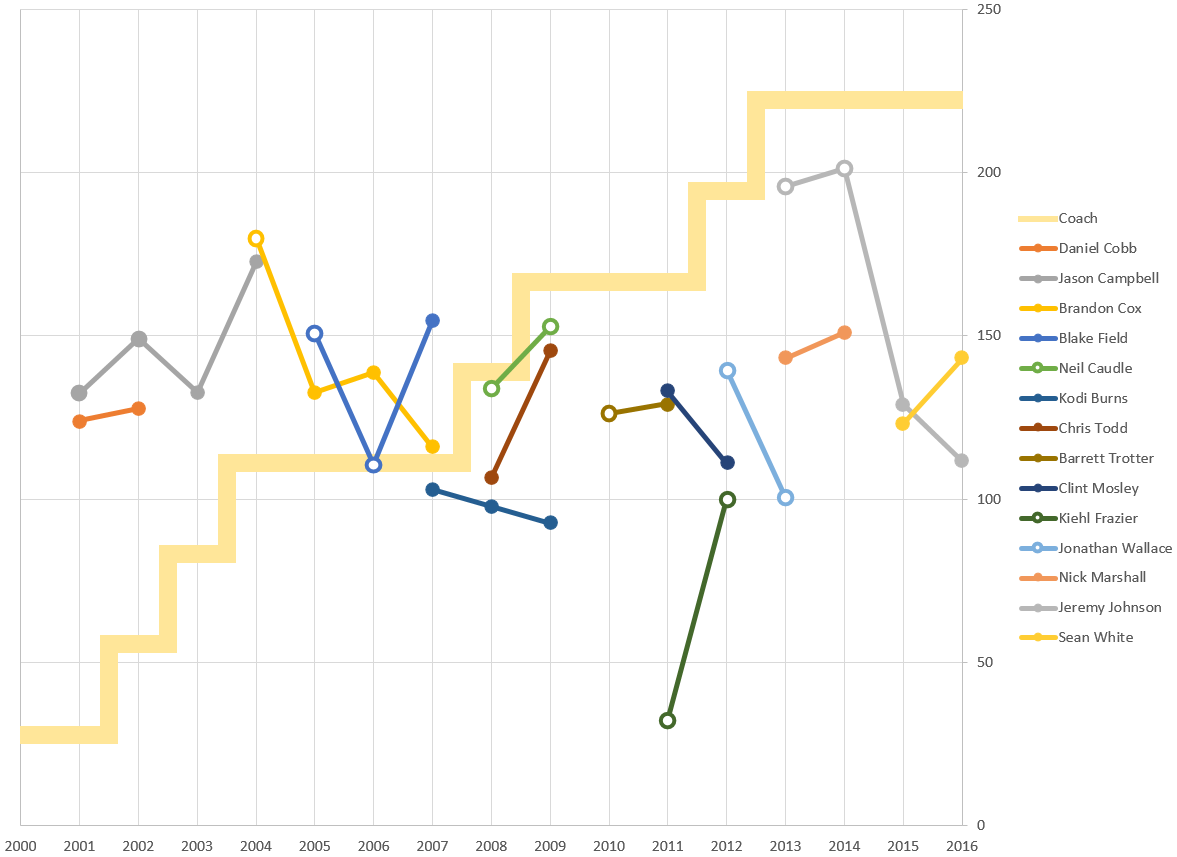 I looked qualitatively in order to group players by exposure to coach, and figure out what they actually did on a season-to-season basis. Sample sizes for each quarterback are likely too small to permit quantitative analysis.

Because he is given the lion's share of criticism for quarterback development under Lashlee, and because Lashlee was on our staff for part of his initial tenure, I have considered Malzahn's and Lashlee's stints as OC as effectively the same.

Players who endured a coaching carousel

These players seemed to be somewhat unpredictable. Campbell's play fluctuated widely with coaching, whereas Cobb and Burns seemed to follow their own trends with no respect to the OC.

Hard to draw conclusions from these players. Cox's play is confounded by his myasthenia gravis (he is first in the recent succession of medically-plagued quarterbacks). Field wasn't really relied on.

Of the quarterbacks coached solely by Malzahn, most improved under his tutelage, most prominently Marshall and White. Johnson seems to be an exception**. When not relied on as the starter, he performed exceptionally well, but as the starting QB he was overall no better than Moseley.

These are players who started under a different OC and finished with Malzahn, or vice-versa. Quarterbacks mostly improved when Malzahn arrived, though Wallace regressed**. Moseley as the starter regressed when Malzahn left, though Frazier improved (albeit not in a way that truly represents a coaching success).

Malzahn's presence as a head coach or OC results in improved quarterback play. When he arrives or if he stays, quarterbacks usually improve. When he leaves, quarterbacks either regress or continue to have dismal play. Thus, there seems to be some good evidence that Malzahn can coach quarterbacks.**

The exceptions to these trends are Johnson and Wallace***. Interpretations of their regressions will vary, and are not limited to the following :

Overall, my opinion is that these two examples are not evidence of Malzahn's inability to coach quarterbacks.

We don't have as much data for other coaches because of OC turnover in the past 16 years, and data for the few quarterbacks developed by a single other coach are confounded. As such, there aren't any valid coach-to-coach comparisons.

* I don't use this quote to pick on anyone or single anyone out. I just felt that these quotes encapsulated the valid opposing viewpoints well.

** This originally read : the claim that Gus Malzahn can't develop quarterbacks seems demonstrably false. After some discussion, I softened my claim, on the suggestion of jd is legend.

*** 2013 is an odd year, in that one pocket passer flourished alongside Marshall, and another floundered. This can be explained by their relative talent levels (3-star vs. 5-star Mr. Alabama).