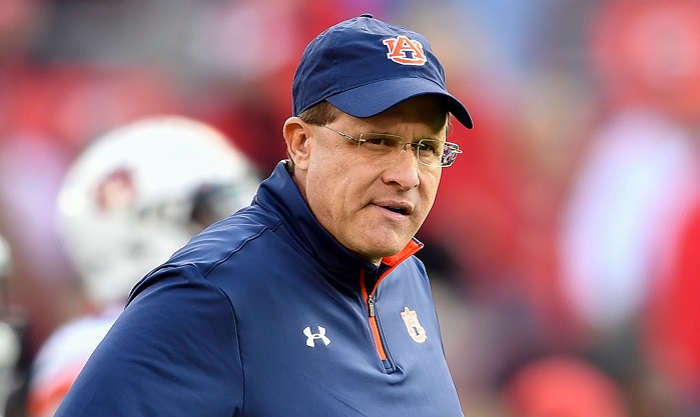 Since when has this stuff been easy to predict?

It's been a while since I wrote on here about Auburn, but occasionally I like to share what bit of knowledge or nostalgia that I've acquired over the years. You can see my previous two entries here and here. As you can see, I occasionally get some solid intel (Jason Kirk and Godfrey were kind enough to credit me with being the first source to break the Muschamp to Auburn hire a few years back), and in the same piece I managed to completely misread what 2015 would be (I WASN'T ALONE IN THAT YOU GUYS). Today's piece ain't gonna have a bunch of insider information or a real assessment of the 2017 season (Bill has you covered in detail already). I do however want to add some historical context to the 2017 Tigers as a way of provoking some thought on what this season could, might, or should happen this fall.

As I'm sure you've read in every media outlet imaginable, folks seem to think Auburn should be a good team this fall, and could be a great team hinging on the Saturday after Thanksgiving. Bill's S&P has us at roughly 8-4, and many folks are predicting a 9-10 win season for the Tigers, most of which are coupled with a 2nd place finish in the SEC West behind Alabama.

And it's that 2nd place finish with 9 wins or more than has me scratching my head. Assuming the Tigers are 2nd in the West, it would mean a loss to the Tide. And assuming their 2nd in the West would most likely mean that we've managed to get to 9 wins. What this breakdown says to me is most of the college football world expects us to drop 1-2 games in addition to Alabama to any combination of Clemson, LSU, or Georgia.

And wouldn't that be fine! Not really, but considering the roller coaster ride we live year after year, a 9-10 win season with a valiant effort against Alabama would certainly mean that our program is headed in a more stable direction that we're accustomed to. Well dear reader I'm here to tell you that if you think for one second that this team is going to be that stable, history would like a word with you.

How many times in the last 50 years has Auburn lost to Alabama and still won 9 games? According to our media guide, 4 times. 1971, 1974 (the only 10 win season with an Alabama defeat in this time frame), 1984, and 1994 are the only examples since Pat Sullivan led the freshman team to a victory over Alabama in '68 that Auburn has had a truly good season while being bested by the Tide.

In '71, the Heisman hangover for Sullivan and the team led to a blowout 31-7 loss in a match-up of undefeated's. In '74, a fake FG closed the gap, but the Tide defense held on late to win 17-13. In '84, Bo Jackson went the wrong way in a game where Coach Dye has gone on record as saying he still loses sleep over, because he should've kicked a FG instead, losing 17-15. And in '94, Frank Sanders was robbed of a first down, ending a furious comeback after being down 3 TD's at the half, losing 21-14.

Now before you @ me on Twitter getting all bent out of shape over some of the most gut-wrenching ends to a season we've experienced, understand that this context is important. There's a flip side to this story.

In the last 50 years, including those 4 seasons, Auburn has won 9 games or more in 22 of them, besting Alabama in 18 of those seasons. In those 18 seasons, Auburn has won 7 SEC titles, won 7 division titles, been the best team in the SEC in 2 seasons ('72 would've been a conference championship year if not for some convenient Alabama scheduling where they played 1 additional conference game than Auburn), gone undefeated 3 times, played for 2 national titles, being named national champion by some form of publication 4 times, and won an undisputed national championship in 2010.

So contextually what does this mean for the 2017 Tigers? For the life of me I can't believe this team wins 9 or more games and doesn't win the Iron Bowl, and most likely the division. And while we're certainly the trendy pick to contend with Alabama this fall, most prognosticators see this season playing out with a scenario that happens almost as infrequently as Georgia being a legitimate contender on the national stage (see you in Hell, 'Dawgs).

So where are people missing the mark? Is Auburn going to flounder to another mediocre 8 win season? Or is Auburn going to be thorn in Nick Saban's side once again and contend for a playoff spot? To try and figure that out, let's take a look at not just Auburn's schedule, but the SEC's as a whole here (I prefer the helmet schedule so I can see who's dealing with body blows from the week prior to our game with them).

Through this lens I'll try and give an assessment based on Bill's win probabilities and scheduling context:

So between Clemson, LSU, *possibly Arkansas because memories die hard, man*, A&M, and Georgia, Auburn would need to have no more than 2 losses for the Tigers to lose to the Tide and do something that has happened in 8% of the past 50 years. I just can't see it. Winning 9+ with a loss to Alabama is historically the most unlikely scenario historically that we've got. Meanwhile entering the Alabama game with only 2 losses means historically there's an 82% chance of an Iron Bowl victory.
Historical context matters in college football. For this reason this football team appears to continue the trend of either doing that thing we do and falling short of preseason hype, or doing that other thing we do and winning a championship. I'm too dang superstitious to make a record prediction, but I will truly be shocked if Auburn does as many expect and finishes with 9+ wins and a Bama loss. This season instead to me appears to continue the trend of 4+ losses or an SEC championship. And I am hoping and believing that it's our time.

Which of these scenarios plays out for the Auburn Tigers in 2017?