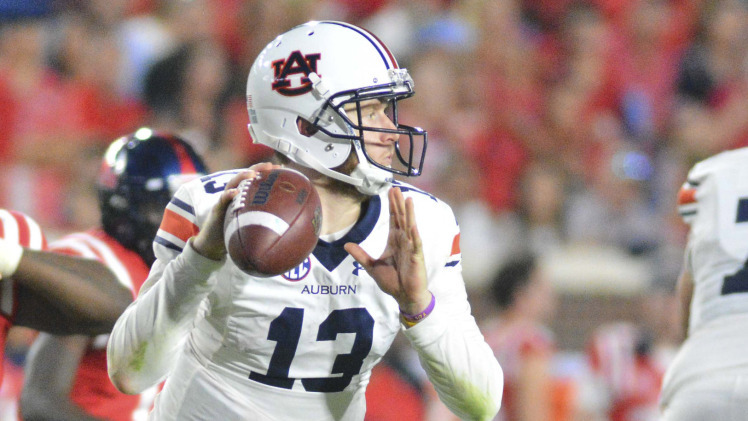 Mattie Ross: Who's the best marshal?

Sheriff: Hmm, I'd have to think on that. Bill Waters is the best tracker. He's part Comanche; it is a pure joy to watch him cut for sign. The meanest is Rooster Cogburn; a pitiless man, double tough.Fear don't enter into his thinking. I'd have to say the fairest is L.T. Quinn; he always brings in his prisoners alive. Now, he might let one slip by evry now and then, but...

Mattie Ross: Where would I find this Rooster?

What does Sean White have that Jarrett Stidham seemingly does not?

Anyone who wants to claim Malzahn's system can't win (or that he can't win without a running quarterback) has basically no answer for Sean White circa October 2016. From Bill C.'s preview:

From a Sept. 24 upset of LSU to a Nov. 5 win over Vanderbilt, Auburn went 6-0. Quarterback Sean White caught fire, and the Tigers averaged 7 yards per play and 513 yards per game; their opponents averaged 4.8 and 334, respectively. They beat LSU in a slog and took down Ole Miss in a shootout. They played one of 2016’s best games, a 56-3 disintegration of Arkansas.

Auburn was the month of October’s best team in the country. But then White injured his shoulder against Ole Miss. He played well against the Rebels and Vandy, but he went 6-for-20 against Georgia and missed the final two games of the regular season. He returned against OU, threw 10 passes, and broke his forearm.

Our offense was absolutely incredible then. And that success wasn't merely due to the offense settling down, etc., because we went down the tubes immediately when Sean got injured. Sean White did it, despite being a non-running quarterback coached by Malzahn prior to Lindsey adding in the crossing routes who wasn't even the starter until several games in. His late-season performance lays waste to any and all of the prevalent objections.

So, offensive line issues aside, we have to figure out what Sean was doing that Jarrett isn't. If we can do that, I think we've got a chance at double-digit wins and a good bowl.

I was born game, and I mean to go out that way.

It apparently has nothing to do with mere physical ability, because Stidham has White beat on all such measures. And (excluding God2illa) if we separate Malzahn's successful quarterback's from his unsuccessful quarterback's, we basically have Chris Todd, Sean White, and Nick Marshall on the successful side, and Johnson, Trotter, and Burns on the other*. There is no measure of athletic ability that predicts which of his quarterback will be successful, and in fact, the statuesque immobile dudes with multiple injuries and limited arm strength have been great successes.

And I really don't think it has anything to do with the ability to process a playbook. If anything, Malzahn's playbook is famous for its stubborn utter simplicity and total dearth of passing concepts. Even John Gruden picked on Cam for the ultra-simple playcalls. If accounts are to be believed, practically anybody should be smart enough to memorize his passing game.

Rooster Cogburn: You could not hit a man at three hundred yards if your gun was resting on Gibraltar.

LaBoeuf: The Sharp's carbine is an instrument of uncanny power and precision.

Rooster Cogburn: I have no doubt that the gun is sound.

There are two paths to success as a quarterback in Malzahn's offense. You can either be a tremendous runner, or, you can be emotionally tough as nails.

You go for a man hard enough and fast enough, he don't have time to think about how many's with him; he thinks about himself, and how he might get clear of that wrath that's about to set down on him.

It remains to be seen whether Stidham will be able to rise to the Type A challenge. He doesn't seem fast enough to lean on mere running ability, so he will probably need to get some serious grit. Given the normal arc of Malzahn's offenses** it's hard to know if he will or if he won't.

JJ may be the perfect example of Type C, the physically-gifted but neither-tough-nor-fast quarterback.

** He is, after all, the Voyager probe of offensive coaching