Auburn baseball: It's not always easy to find a way to watch the Tigers

With no TV for the MAX Capital City Classic, it's time for Auburn to think of the fans in the future.

Share All sharing options for: Auburn baseball: It's not always easy to find a way to watch the Tigers

Fans on both sides of the Alabama River are excited about the MAX Capital City Classic Tuesday night in Montgomery. It's an early chance to generate some baseball buzz and pits Auburn and Alabama against each other in an "exhibition" game that adds a nice boost to the RPI for both teams and showcases one of the best baseball parks in the Southeast, Riverwalk Stadium.

However, fans hoping to turn the game on in their living rooms will be disappointed. For the past few years, CSS and all its grainy glory has carried the game live from downtown Montgomery. This year, the network is showing an Atlanta Braves spring training game -- unless you live in Florida, and then you get Florida high school basketball. Either way, Auburn and Alabama fans won't get the MAX Classic on TV this year.

Part of me wishes folks still followed baseball like they did in the early 1910s. 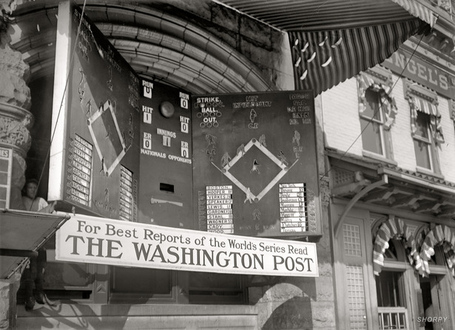 That's how fans watched the 1912 World Series, profiled in a great old piece from The Atlantic. Can you imagine a video display being rolled out at Toomer's Corner, fans gathered downtown, Rod and Andy on the call piped in through speakers? That sounds amazing.

Player position and game status are indicated on either side with lights; the current scoring line appears down the center. If a ball were hit to left field, the left fielder would illuminate. Each team's lineup appears below the ersatz diamond: pitching for the Sox, Smoky Joe Wood; for the Jints, Jeff Tesreau. (The two would face off three times in the eight-game series; game two was suspended on account of darkness after 11 innings.) You can see the operator behind the scoreboard at left; an announcer, tracking the game by phone or over the wire, would give a live (albeit slightly delayed) play-by-play.

Seriously. You just need one digital board to show Gametracker, a set of speakers and permission from the university.

Still, this brings up a bigger issue when trying to follow Auburn baseball: just how in the world to get it. I listen and watch a TON of college baseball during the year, and I figure this is as good a time as any to share some of my secrets.

All Auburn baseball games are on the radio. They are part of the Auburn Network Package that ISP Sports sells. Unless their practices have changed, ISP includes the baseball games as part of its basketball package. Here are the known affiliates:

If you live in any of the orange areas, you should be able to get Auburn baseball on the radio, according to ISP.

That's a pretty wide map and covers most of the state. However, I can tell you from experience, that map isn't entirely accurate. Sometimes, the affiliates will not broadcast the non-conference games, and only the flagship stations (WKKR 97.7 in Opelika and sometimes WMXA 96.7 or WANI 1400 AM) will guarantee coverage of ALL Auburn baseball games. That's a problem for a lot of Auburn fans.

It's a two fold problem really. How can Auburn fans in say, Birmingham, listen to the non-conference games? For other schools, it is pretty easy. Take Florida, for example. When UF was playing Georgia Southern, I was riding in my car home from work. I was also able to listen to the game. I found a UF baseball radio affiliate on TuneIn, plugged my phone into my car radio, and boom: instant radio.

TuneIn (and iHeartRadio) are lifesavers. A quick internet search can give you a list of " X College Radio Stations". Here's Florida's and here's Auburn. Now, down at the bottom of the Auburn link, there is a list of "shows." Fair warning, I've never tried one of those but plan on testing it for the Mississippi State game on March 9.

This brings up the other problem. The flagship radio stations are blacked out during sports broadcasts for Auburn. Meaning, they won't work at all. I've tried some of the other affiliates, and every now and then, you can luck out and find a station that forgot to flip the switch and have the broadcast live. However, that's unreliable.

Here's another thing that Auburn says will work, but again, I haven't tested it. According to the official Auburn app, you can listen to radio broadcasts. 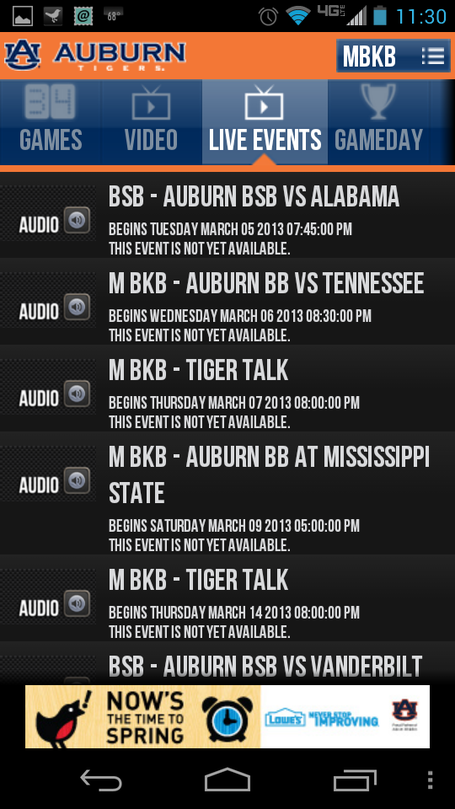 I'll try it out for the Alabama game. Fingers crossed it works.

Now, finding/following the games on the Internet is a little bit easier. First, I highly recommend subscribing to AUHD. When basketball season is over, Auburn baseball and AUHD will go full three cameras for all home games. The video, features, graphics, etc. are all amazing. It really is a top notch broadcast, and I can't say enough about it. A monthly subscription is $9.95, and a yearly is $79.95. I've tried some of the other school's online streaming such as NeuLion (Ole Miss) and GeauxZone (LSU), and Auburn tops them by leaps and bounds.

Still, AUHD only covers home Auburn baseball games. You still need a way to watch/listen to away games. Now, I might get in trouble for it, but here is a link that I use. Full disclosure, I've used it to watch AUHD broadcasts on my phone, even though I own an AUHD subscription.

Other TV Options include the Watch ESPN App, and if you are really a baseball junkie, there is a BYU baseball channel on Roku. I really think this is an option that Auburn should explore. I know I would gladly pay $10 a month for an official Auburn Roku channel.

Also for following online, there is the old reliable Gametracker at auburntigers.com. It's not always 100-percent reliable (it freezes or someone forgets to turn it on to start the updates), but it will do in a pinch.

Finally, and shameless plug here, you can always follow me (@AUPPL) on Twitter. I try to give half-inning-by-half-inning updates.