Auburn vs. Georgia, Game 2 lineup: Dan Glevenyak out, Mitchell Self in

Auburn coach John Pawlowski is making a change, starting Mitchell Self over Dan Glevenyak at shortstop.

Share All sharing options for: Auburn vs. Georgia, Game 2 lineup: Dan Glevenyak out, Mitchell Self in

When Auburn announced its lineup for the second game of the series against Georgia, there was one noticeable change: Mitchell Self is starting instead of Dan Glevenyak at shortstop. 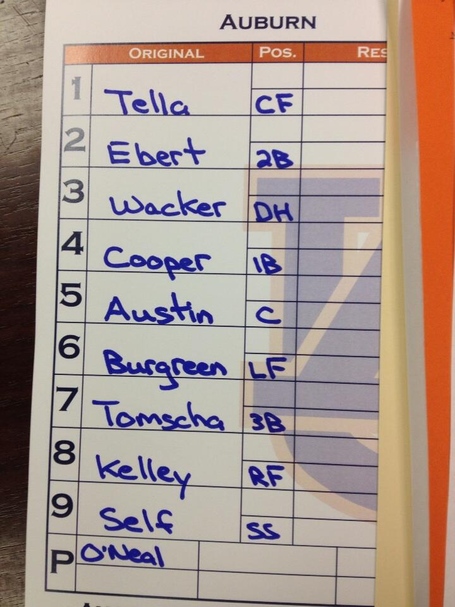 The move is not all that surprising, as Pawlowski attempts to improve the Tigers both at the plate and in the field. Glevenyak has unfortunately earned the reputation as a bit of a defensive liability, as he leads the team with 12 errors this season, and he committed two errors during Auburn's 4-3 win Friday night over the Bulldogs. In 2012, Glevenyak led the Tigers. with 21 errors, but he made up for his defense with an impressive .319 batting average. This season, Yak is hitting just .235, the lowest average among Auburn's regular starters.

Self is making his second start of the year, and he has just five official at-bats going into Saturday's contest. He hasn't recorded a hit and has compiled two walks and one run. In the field, Self has six assists, five put-outs and three errors. Last season, he started seven games and hit .207 with seven runs and four RBIs. He 20 assists, eight put-outs and two errors.

Auburn and Georgia are set for a doubleheader Saturday at Plainsman Park. First pitch for Game 1 is scheduled for 1 p.m.