The Tigers and Crimson Tide will meet in a single-elimination game Tuesday.

Share All sharing options for: SEC Baseball Tournament 2013: No. 10 Auburn faces No. 7 Alabama in 1st round

With the regular season complete, the first-round matchups of the 2013 SEC Tournament have been set. Auburn will play Alabama in the second game of the morning session on Tuesday, a single-elimination contest.

Hold on to your butts.

The winner of the Iron Bowl-baseball-pacalypse will advance to double-elimination play and take on No. 2 seed LSU on Wednesday. The other single-elimination game in Auburn's side of the bracket features No. 6 Ole Miss against No. 11 Kentucky, with the winner moving on to face No. 3 Arkansas.

On the other side of the bracket, No. 8 Florida and No. 9 Texas A&M square off, and the winner gets No. 1 Vanderbilt in the second round. No. 5 Mississippi State and No. 12 Missouri play for the right to meet No. 4 South Carolina.

Tennessee and Georgia finished 13th and 14th, respectively, in the standings and didn't qualify for a trip to Hoover.

Auburn and Alabama are both trying to make a final push for the NCAA Tournament. The Tigers enter Tuesday's game with an RPI of 32. The Tide checks in at No 29. 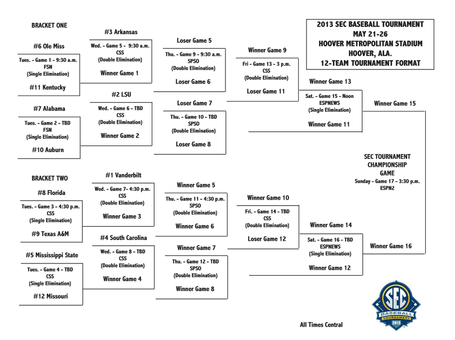 SEC Baseball Tournament 2013: Auburn falls to Alabama in opening round