The Tigers' first baseman and left fielder were rewarded for their solid seasons.

Auburn first baseman Garrett Cooper and left fielder Cullen Wacker have been named second-team All SEC by College Sports Madness. We're not sure how often their picks line up with the SEC's official list, but Cooper and Wacker both deserve the accolades. 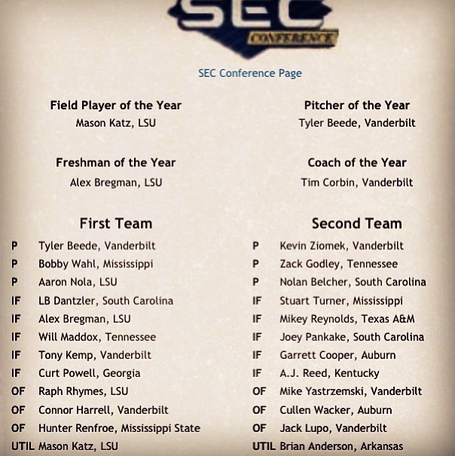 Cooper has been Auburn's best offensive player in 2013. The Tigers' first baseman leads the team with a .354 batting average, .481 on-base percentage and .540 slugging percentage. Cooper is tied for the team lead with seven home runs and 37 RBIs, and he has also added 12 doubles and 31 runs scored.

Wacker has Auburn's second-best average at .320, and he checks in with a .383 on-base percentage and .420 slugging percentage. He's scored 24 runs, connected on 12 doubles and two home runs and is just behind Cooper with 34 RBIs.

In addition to their prowess at the plate, the duo has been excellent in the field. Wacker is second on the team in fielding percentage, at .988, and Cooper is third, checking in at .985. They've combined to commit just nine errors.

Hopefully, Cooper and Wacker will have a chance to improve their stats in the NCAA Tournament.