The time for messing around is over. SEC play is upon us.

Auburn has had its ups and downs in non-conference action, but the Tigers have put it together and are riding a five-game winning streak. The surge couldn't have come at a better time, as Texas A&M visits Plainsman Park this weekend to begin SEC play.

The Tigers had one of their best offensive performances of the season, and they bounced back from a disappointing loss to Alabama in the Capital City Classic.

Terrance Dedrick blew a three-run lead in the ninth, but with the bases loaded and two outs, Ryan Tella came through for the walk-off win and the sweep.

The Tigers' pitching staff put up its second one-hitter of the season, and the bats staked Auburn to a 6-0 lead after five innings.

Damek Tomscha hit his fifth homer of the season -- his fourth in five games -- and Auburn got revenge against the Hornets, who beat the Tigers earlier in the season. 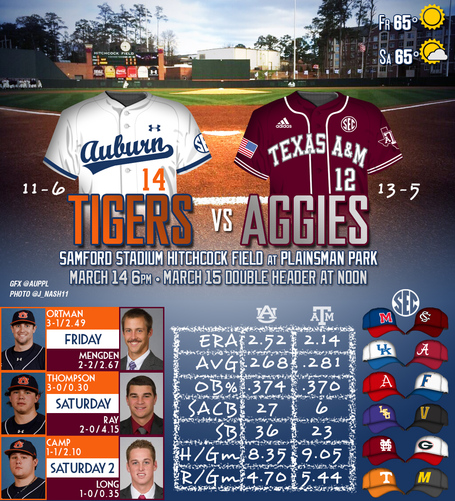 Obviously, we'll really see what this Auburn team is made of over the next two months against conference competition, but it seems like Sunny Golloway is finally connecting with his club. There were early struggles on offense, both in terms of stringing together hits and executing bunts and hit-and-runs, but the Tigers have done a much better job at the plate over the last five games. They're averaging 6.2 runs per game during the streak, up from 4.1 in the first 12 games of the year.

As one might imagine, the better production has led to better individual stats for Auburn's hitters. The team is now batting .268, up from the low .200s a couple of weeks ago. Anfernee Grier has cooled off a bit, but he's still hitting .300. Ryan Tella at .340 is staying consistent, and Damek Tomscha, Jordan Ebert and Dan Glevenyak have caught fire. Tomscha is leading the team in average (.356), and with five homers, two doubles and 16 RBI, he's really settling into that power-hitting role, which is absolutely necessary for Auburn to have success this year. Ebert is up to .340, and Yak is batting .304 with three doubles, a homer and a triple. He's been a terror on the base paths, successfully stealing on 7-of-8 attempts. Auburn now has six guys with at least 19 at-bats hitting .300 or better.

They only serious concerns right now -- and they're pretty serious -- are defense and closing out games on the mound. Dedrick hasn't been the same closer he was a year ago, with just one save and a 5.40 ERA this season. Trey Cochran-Gill was given the opportunity against Alabama State and worked around a one-out double to get the job done. Going forward, Golloway has a decision to make regarding the back of the bullpen. In the field, Auburn has committed an alarming 30 errors, easily the most in the SEC. Incredibly, the Tigers have won five in a row despite committing 13 errors during that stretch. Against SEC teams, that kind of sloppy play is much more likely to result in five straight losses.

Texas A&M is a good ballclub, but the Tigers has a great opportunity this weekend. The Aggies are ranked as high as No. 23, but they've had some issues this year, and some fans are ready to see a change of leadership. For an Auburn team that is hot and playing at home, against an A&M team that has been awful on the road in the last two seasons, there's no reason expectations should be anything other than a series win. In the Ags' last road series, against solid Fresno State, they were swept and shutout twice. A&M has some good bats, but Auburn has the starting pitching to neutralize them. If the Tigers continue to execute at the plate and clean up the defense a bit, the series is theirs for the taking.