The Tigers are playing for their second straight series win to start SEC play.

Sunny Golloway's Auburn Tigers, winners of nine out of 10, will try to continue their hot streak this weekend in the second SEC series of the year. It won't be easy: Auburn travels to Knoxville to face Tennessee, which has lost just two games so far.

Auburn wasn't able to complete a three-game sweep, but it got off to a good start in conference play.

Auburn scored in every inning, and Michael O'Neal was solid on the mound, allowing two hits in six strong.

The Tigers dominated the Eagles for the second day in a row. Freshman catcher Blake Logan hit his first home run in an Auburn uniform and drove in six runs. 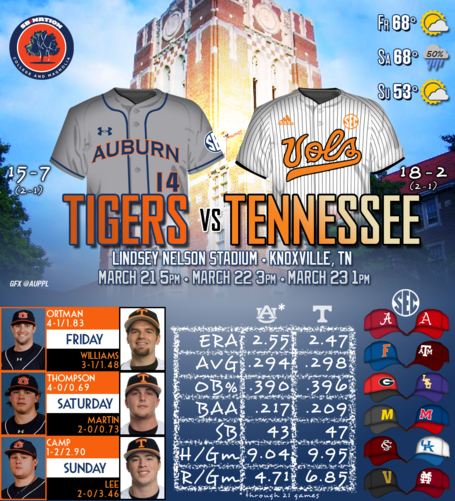 Auburn's been hot lately, but we're about to find out what the Tigers are really made of. It's the first SEC road trip of the year, and it comes against a Tennessee team that has, surprisingly, been one of the conference's best so far.

The Vols rank in the top four of the league in batting average, on-base percentage, runs and RBI, and they're fifth in slugging percentage and home runs. On the base paths, they're the only SEC team that has more stolen bases than Auburn this season. The Tigers will need to be patient at the plate. Tennessee's ERA ranks just seventh in the league and has allowed 68 walks, ranking 11th. But, Auburn should see some pitches to hit. The Volunteers have given up 44 extra-base hits, which ranks 12th among SEC teams. Compare that to Auburn's 26 extra-base hits allowed.

Tennessee has a number of hot hitters. Nick Senzel leads the way with a .400 batting average, and A.J. Simcox, Taylor Smart, Scott Price and Christin Stewart are all batting over.300. Stewart (.587), Price (.566) and Senzel (.533) are all in the league's top 13 in slugging percentage. Will Maddox has nine stolen bases, and Senzel and Simcox each have eight. The Vols cand punish teams with power and speed.

Like a lot of conference series, there's a good chance this one may come down to which team gets extra opportunities. This is where Tennessee has a pretty sizable advantage. The Volunteers have been great in the field with just 13 errors, tying for the league low. Auburn, on the other hand, leads the SEC with 33 miscues on defense. Tennessee's offense is already good enough, and if the Tigers give the Vols a bunch of extra opportunities, it will be awfully hard to stop them.

It might be too much to expect a series win this weekend. But, Auburn just needs to avoid the sweep. Keegan Thompson going on Saturday will probably be the Tigers' best chance at victory, and they really need to make good. Picking up one game in a tough road trip would be acceptable. Taking two would be -- in the words of Cousin Eddie -- a real nice surprise.