The Tigers will try for their third straight SEC series win against one of the conference's worst teams.

There aren't many hotter SEC teams than Auburn, which has won 12 of 14 games and its first two conference series of the year. After taking two of three at Tennessee last weekend, the Tigers return to Plainsman Park for a Thursday-Saturday set against Missouri. Those other Tigers are probably the worst team in the league, so it's a great opportunity to keep building the momentum.

The Tigers' offense scored all three runs with two outs, and their pitching worked out of three bases-loaded jams, including one in the bottom of the ninth.

Another Keegan Thompson start on the mound, another Auburn win. The freshman has proven he's already one of the best pitchers in the SEC.

Auburn's bats woke up with two home runs and two doubles, but for the second Sunday in a row, shaky pitching kept the Tigers from the sweep.

Aside from the five-run sixth, Kennesaw couldn't do much against the Tigers.

Missouri at No. 23 Auburn 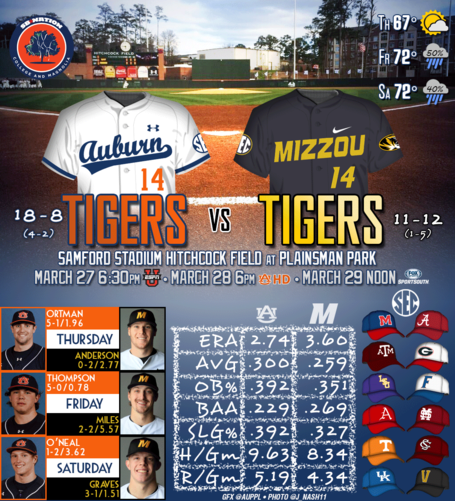 Did anyone expect the Tigers to be 4-2 after the first two SEC series of the year, both against ranked opponents? We didn't either, but that's exactly where Auburn is: tied with Ole Miss and Mississippi State for the best record in a jumbled up mess of a conference. Obviously, it's early, but after some serious struggles in the opening weeks, Sunny Golloway has his club looking like a possible contender.

Winning a couple of surprise series is nice, but if Auburn wants to prove it can be a contender, it has to take care of business this weekend against a bad Missouri team. Those Tigers are pretty much awful. Entering the week, they ranked last in the SEC in batting average and second-to-last in ERA. In almost every major offensive category, they rank in the conference's bottom three. Same goes for pitching. On defense, their 29 errors are fourth-most in the SEC -- though, to be fair, Auburn's 33 are second-most. We can't say it enough: This Mizzou team is terrible.

On the mound, those Tigers don't walk many batters (41, fewest in the league), but that might be because they're serving up fat pitches that hitters are crushing. They've given up 35 doubles, and nine homers -- Auburn has given up 25 and three, respectively -- and their .269 batting average against is a league worst. Our Tigers definitely trend more toward the get 'em on, get 'em over, get 'em in type of team -- second in the league on-base percentage (.387), seventh in slugging (.384) -- but they've turned on the power a little more lately. If they can execute when bunting and on the base paths, they should get some opportunities to drive the ball.

Auburn is playing well, Missouri is not and the series is at home. Anything less than taking two of three will be a disappointment. But really, it seems like the good Tigers should find a way to get the sweep. Their biggest downfall in SEC play so far has been Sunday pitching, allowing 17 runs in the two series finales. After Justin Camp proved to be ineffective in a Sunday starting role, Michael O'Neal will get another shot at it (yes, this Sunday game is actually on a Saturday). Winning the first two shouldn't be much of a problem, but whether it's in a low-scoring game or a slug fest, Auburn needs to get that third win on Saturday. Our Tigers won't have an easier chance at a sweep for the rest of the year.