Can the Tigers get back on track?

Auburn hits the road again this weekend, traveling to Fayetteville for a three-game series against Arkansas. The Tigers have lost four consecutive SEC series, and it won't get any easier this weekend. The Razorbacks are coming off a series win over highly touted Vanderbilt. Auburn desperately needs to take at least two of three in order to keep postseason hopes alive.

The Tigers scored in just one inning, but a four-run first, powered by a Blake Austin three-run homer, was enough as Dillon Ortman pitched a complete-game gem.

Auburn took a 2-1 lead into the ninth thanks to eight fantastic innings from Keegan Thompson, but Jay Wade couldn't hold the lead. Wade gave up a game-tying double, and the Trey Cochran-Gill allowed the go-ahead RBI single.

Trey Wingenter allowed two runs and recorded only one out in the first, but Michael O'Neal was solid in relief, giving up one run in 5 1/3 innings. Once again, the Tigers' bats couldn't match the pitching.

The Tigers were without a run going into the bottom of the fifth, but they finally got it going to avoid a disastrous midweek loss. 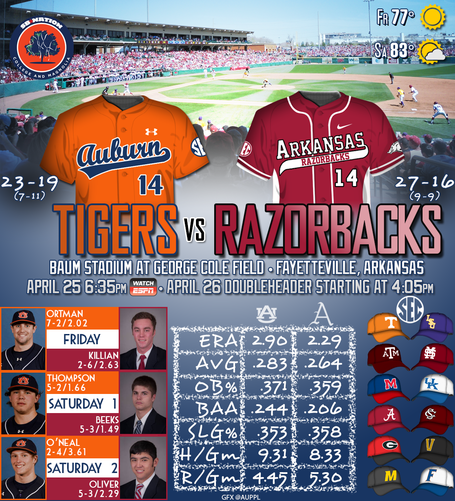