The Tigers will try to get back on track with a road trip to Oxford.

Coming off a series loss to Missouri and a midweek trouncing at the hands of Samford, Auburn has gone from hot to reeling. The road doesn't get any easier, as the Tigers head to Oxford to take on Ole Miss, which ranked 10th in RPI.

Playing in front of a big crowd and national audience on ESPNU, the Tigers embarrassed themselves with four errors and plenty of mistakes at the plate and on the base paths. The result was a loss to a team with one previous conference win.

The play in the field was better, but the offensive execution was just as bad. The result was a series loss to a team with one previous conference win.

Auburn finally got it together, racking up 16 hits in a fairly comfortable win.

Just awful. Nothing positive at all. 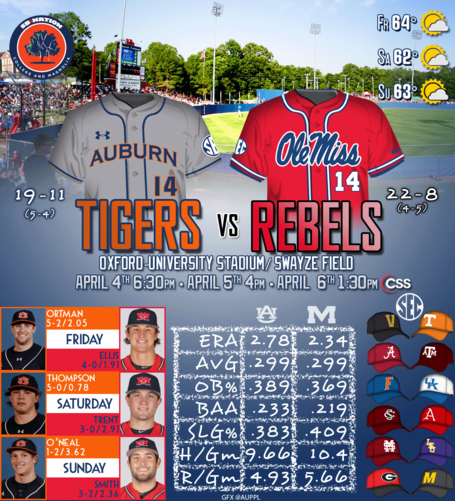 A little over a week ago, Auburn was one of the hottest teams in the SEC, and a 7-2 start to conference play seemed pretty realistic. Instead, the Tigers suffered a bad series loss to Missouri, the worst team in the league, and then didn't show up in a lopsided loss to Samford. Now they look like a club on the brink of a collapse, and not the contender fans were hoping had emerged. The series at Ole Miss could be make or break for the rest of the season.

Both teams are fairly similar when it comes to reaching base, but Ole Miss has a significant power advantage. The Rebels have 10 more homers (21-11) and nine more doubles (43-34), which have helped them score 22 more runs than the Tigers this year (170-148). While Auburn is much more interested in manufacturing runs with bunts and action on the bases, Ole Miss is content to mash the ball, and for good reason. The Rebs rank third among SEC teams in slugging, are tied for fourth in runs and are second in homers. Catcher Will Allen is the big hitter, ranking fifth in the league in slugging (.547), tied for second in doubles (11) and tied for first in RBI (33). First baseman Sikes Orvis and Third Baseman Austin Anderson also rank in the top 11 in slugging, so Auburn won't simply be able to pitch around Allen and move on.

Ole Miss has better overall pitching numbers, but a big reason for that is the struggles Auburn has had on Sundays. In the first two games of the series, the Tigers might actually have an advantage with Dillon Ortman and Keegan Thompson.The biggest difference maker will likely be play in the field. The Rebels are in the middle of the SEC pack, but they're much, much better than Auburn. Ole Miss has committed 27 errors this year, which is 20 fewer than the Tigers' 47. Poor defense can turn a series win into a loss during conference play, and right now, Auburn is the team that is much more likely to blow a game with bad defense. If Sunny Golloway's club commits seven errors, as it did in the series against Mizzou, it's hard to imagine coming home from Oxford with even one win.

The Rebels are reeling, too. They're coming off a sweep at the hands of Alabama, and really, it's a must-win weekend for both teams. Auburn proved in its 4-2 start to SEC action that it has the ability to take this series, but in the last week, the Tigers have shown they could be ready to pack it in and get swept by a good team. If Golloway can get his players to regain their focus, taking two of three is doable. If he can't, it isn't.