Auburn needs to come up with a good weekend if it wants to advance to the SEC Tournament.

The final weekend of the regular season is here, and Auburn hosts LSU with a lot on the line. The visiting Tigers are trying to win the SEC West, and our homestanding Tigers are fighting for a spot in the SEC Tournament.

The Tigers held a 3-2 lead after the sixth, but a four-run Kentucky seventh did them in.

Dillon Ortman was brilliant for seven innings, and the offense came alive with 15 hits, three doubles and a triple.

Auburn went up 5-0, but it all fell apart and ended in a crushing series loss. To make matters worse, Keegan Thompson was hit by a line drive, resulting in a season-ending broken foot.

The Blazers entered on a 10-game winning streak, but the Tigers got up off the mat and outlasted UAB. 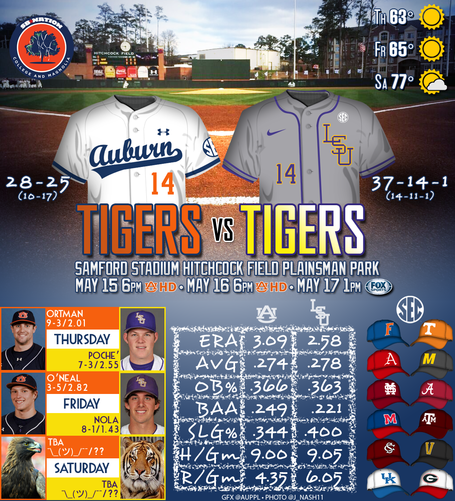 This is it. Auburn is currently in last place in the SEC West, and the Tigers are a half-game back of Georgia (10-16) for the final spot in Hoover. It's certainly possibly for Sunny Golloway's club to make up the necessary ground on the Bulldogs -- or Tennessee (11-16) or Kentucky (12-15) -- but it will take at least one win against the Bayou Bengals, and maybe more.

To get a feel for the final series of the year, Kevin Ives swapped questions and answers with Pod Katt of SB Nation's And the Valley Shook. Pod Katt's answers are below, and you can find Kevin's answers right here.

Pod Katt: Auburn can certainly get at least 1 win this weekend, as our TBA Game 3s have been very rough for the last month or so. There's also a possibility that Jared Poche has a bad start in Game 1 and LSU plays the weekend from behind. Both teams have a lot to play for this weekend and I expect LSU to be focused, but if the relief lets us down again or if the bad bats are back, LSU could have a disastrous weekend.

You're not getting a win against Aaron Nola though.

KI: How does this year's LSU team stack up against other teams. Regional ready, or College World Series bound?

PK: I've seen stranger LSU teams overcome themselves and reach Omaha, but the road appears to be particularly difficult for us this year. Assuming LSU hosts a regional round, they're nearly guaranteed to be paired with and sent to neighboring UL-L for the Supers. The Cajuns have an amazing offense and a wild, if small, home crowd that will be a difficult task to overcome. Reality may end up being even worse as some projections now are sending LSU to UL-L for the regional round.

KI: Nola, obviously, has been the stud. It always seems like LSU has one dominant, MLB-ready pitcher every year. Who's next in line for the Tigers?

PK: That there is no good answer to this question is one of the main reasons for the struggles this season. Jared Poche's been good enough in his FR season to hold on to the #2 starting job for most of the season, but I wouldn't call him dominant. Cartwright has been tried as the #3 starter a few times (and likely will get the call again this weekend), but it hasn't been successful. Parker Bugg has had some good relief appearances. I'm not saying these young guys won't improve with another offseason, and pitching Coach Alan Dunn has done a remarkable job with our battery in just a few years. But none of these guys looks like a Gausman or Nola type talent yet.

KI: What matchups this weekend give you pause, matchups that may favor Auburn?

PK: SR Ortman vs FR Poche' is a battle that i'm not looking forward too. It's a high pressure situation for a true frosh in Poche' to essentially face Aub's current staff ace on the road and set the tone for a weekend in which LSU really needs a sweep to improve it's postseason standings. If he can handle it, this will be a great weekend for LSU. LSU's batting issues have been off and on all season, but they do suffer significantly more against LHP, which has me worried that Nola may not get any run support on Friday. TBA vs TBA also has me worried based on past experience, but it's tough to get too concerned with the complete unknown.

KI: Do you agree with me that the SEC needs to revisit the travel policy (re: rainouts)? It's cost LSU one win (the UGA tie) and one game (Bama), and might be the difference in winning the West and your seeding in Hoover. I know that UGA tie was costly for Auburn (we are a half game back instead of tied with the Dawgs in the standings), and if Auburn doesn't make Hoover because of a rainout and travel curfew in March? I'll be a bit livid.

PK: Despite bearing the brunt of bad weather this season, I'm actually ok with the current policy. In the case of the UGA tie, unless the league is going to mandate charter flights for conference games over a certain distance, you have to accommodate the perils of flying commercial. As for the Bama rainout, there's really nothing you can do if it rains hard all 3 days of a series. Perhaps if it wasn't the next to last weekend of the year, both teams might have been able to push their midweek's back a day and play on Monday, but there was just no room this week for either. It sucks, but it's pretty much unavoidable.