Wednesdays with (Oscar) Whiskey: On growing up Auburn in Aggie/Longhorn country

In this edition, Oscar talks about growing up as an Auburn fan in Texas and Aggie fans' weird traditions, and he asks a simple question about Johnny Football.

Share All sharing options for: Wednesdays with (Oscar) Whiskey: On growing up Auburn in Aggie/Longhorn country

Howdy, y'all! Oscar Whiskey here, and well, it looks like our Tigers are going to be in my neck of the woods this Saturday! That's right, Auburn travels out to the Lone Star State to take on the Texas A&M Aggies. Some of you may recall last year's game, and yep, that's all we're going to say about that. Well, let's not waste anymore time and get this show on the road!

As I've mentioned before, I did not grow up in the state of Alabama. Rather, I grew up in a suburb on the northeast side of Houston, Texas. Being raised as an Auburn fan in Texas, I imagine, is much different from being raised an Auburn fan in Alabama. For instance, the rivalry between Auburn and Alabama pretty much does not exist. Nope, there's this other rivalry, and it is ridiculously lopsided. This rivalry doesn't even have a name. In fact, the two schools had to create a contest of sorts to "generate interest." Of course, I'm talking about the game between the University of Texas and Texas A&M.

Nearly everyone I knew when I was growing up was a fan of the Longhorns or the Aggies, and if you weren't one or the other, then you didn't matter. You go into a sporting goods store and it's very similar in Texas as it is in Alabama; instead of one side of the store having nothing but Auburn gear and the other side having nothing but Alabama gear with a near inexhaustible supply, it was the same way with TAMU and UT gear. I can remember the first time I saw an Auburn hat in an Oshman's and how I about scared the hell out of my parents running across the store, yelling, trying to find them to share my discovery. Oh yes, it was that rare of a sighting and I was a terrible child.

My father, on the other hand, disliked both of them. He would often scoff and ask, "Who do they play?" To which he would answer himself, "Nobody, that's who." He would deride the dying Southwestern Conference, and when the Big XII was formed, he claimed it was a desperate attempt by the Big 8 and Texas to regain relevance. "They'll play nobody, accomplish nothing and get credit for everything." He was kind of right.

But no one out here knew anything about Auburn, and truthfully, a majority of people still don't. Even with the ever increasing presence of the Southeastern Conference over the past seven years, I still have to answer as to which state Auburn is in -- and before you go guffawing, 'Bama fans who might be reading this, no one out here knows where UA is located, either. Twenty years ago, I had to contest that Auburn was better than both TAMU and UT, but the problem was that no one ever saw Auburn play because nobody could. The Aggies, at the time, had just won their third straight SWC championship, and the only piece of evidence of Auburn's dominance I had to offer was this: 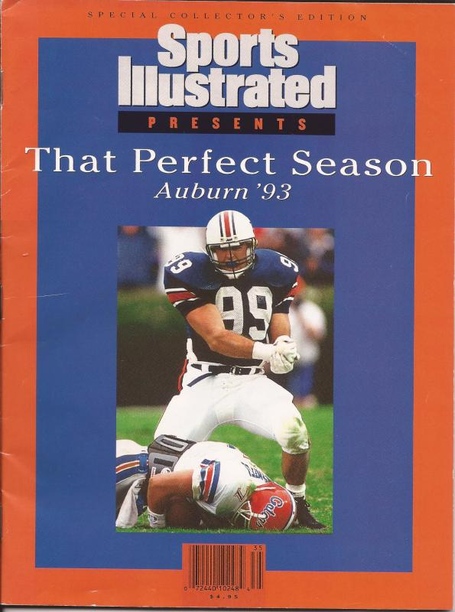 And that didn't prove anything.

Aggies: Where you're strange

Like any good rivalry, both sides had jokes about the other. However, there were a lot more Aggie-specific jokes than there were Longhorn-specific jokes. You couldn't go more than a couple of days without hearing an Aggie joke. The former pastor of my church use to warm up the congregation before every sermon with an Aggie joke. The funniest part was that a majority of his audience were Aggies.

Their traditions are weird. Aggies have an entire event for seniors graduating that revolves around receiving their class rings. They have male cheerleaders, and some fans are adamantly opposed to having female yell leaders. They have a special bench under a special tree for marriage proposals (which is funny because TAMU wasn't coed till 1963, so what were they doing with that bench before then?).

They yell things like, "Hullabaloo" and "Short A" and "Whoop" and make strange hand gestures that are meant for certain cheers (do microphones not work at Kyle Field?). They have "Midnight Yell Practice" because, you know, cheers you've been doing for decades might still trip you up. Bats live under their stadium. Their mascot is a dog who is also the highest ranking member of the Corps of Cadets. They mention their biggest rival, Texas, in their fight song, which I feel is more of a symptom of Stockholm Syndrome than actual animosity.

Simply put, Aggies are weird and you don't want to be an Aggie.

A simple question -- an honest answer

It's been just over a month since the latest Game of the Century, and I'm sure we all look back to the lead up to the contest with fondness and excitement (WARNING: SARCASM OVERLOAD). After the long Summer of Manziel with all the hype and controversy and general idiocy by some fans; I think we were all ready to see it be over. The Friday night before the game I was hanging out with a good friend of mine who is a big TAMU fan. The bar we were at had the TVs tuned to the various sports channels, some of which were doing their own previews for the TAMU-'Bama game, and my friend was going on and on about how excited he was and what he was hoping was going to happen on Saturday and blah blah blah.

But then as if almost on cue, ESPN's favorite college football troll, Paul Finebaum, comes on the screen. Before TAMU had made their official move into the SEC, I had told my friend all about PAAWWLLL and what to expect. A year later, my friend understood why Finebaum has the titles of "Most Hated Man in the South," as well as "Biggest Joke in the South." PAAWWLLL was on ESPN doing what he does best, this time focusing primarily on JFF. My good Aggie friend, at that moment, had had enough.

Aggie friend: "Can you believe that sum'bitch? Honestly, where does that piece of shit get off? I mean, seriously, Johnny is a 20-year-old kid who won the Heisman and is arguably the best player in college football and happens to come from money! Seriously, if you were him and that were your life and you had the means to do those things, would you be any different? Hell no! He's a kid! He's living the life! All this bullshit about selling autographs and leaving the Manning camp early and courtside seats it's all --"

Me: "OK, stop, enough! Alright, we get it, we've been hearing this all goddamn summer! Now, I want to ask you a simple question and I want you to answer it honestly."

Me: "Now, I don't want you to answer this question as an Aggie fan, but as a college football fan, and you have to give me an honest answer."

Me: "If Manziel had gone to any other school, would you be defending him the way you are now?"

Aggie friend: "Well, the only other school Johnny would have gone to is Texas."

Me: "OK, and as a college football fan, if Manziel would have had the season he had at UT and not TAMU, would you still defend his character the way you've been doing all night?"

Aggie friend: "No, if he'd have gone to Texas, I'd hate his f--king guts. I would call him a piece of shit and hate him."

Me: "Thank you, that's what I wanted to know, and you proved a point for me."

I have asked this question to many other Aggie fans and have gotten a variety of responses. Most are like the response my aforementioned friend gave, sometimes followed by, "Texas A&M, though, is the only school Johnny would have played for, anyway." Others have said they probably wouldn't care but would still make fun of him. A few, surprisingly, have said they would defend Manziel even if he were a Longhorn

The point that my friend helped me prove? That fans in general, even when asked to be unbiased, are just that, and Aggie fans are particularly fickle, too. I was asked similarly about what if Cam Newton had transferred to a school that wasn't Auburn. Knowing that Newton's choices came down to Mississippi State and Auburn, if Cam had picked the Bulldogs over the Tigers, I wouldn't have hated Cam. Instead, I would have been questioning the judgement and capabilities of Auburn's coaching staff. I harbor no ill-will or dislike toward T.J. Yeldon or Cyrus Kouandjio. I guess the money was just better at 'Bama.

I, honestly, have nothing against Manziel. Yeah, he's a cocky ass-clown, but he's also probably the best player in the game of college football right now. He's fun to watch, and his skills and abilities are tremendous, and I hope I see Auburn defenders push his face into the dirt of Kyle Field. Not because I dislike him. No, because he's playing our Tigers and I want to see Auburn win. Last year, Manziel embarrassed Auburn out of its own stadium.

This year, I want Auburn to pay Manziel and the Aggies the same respect. This year, I want TAMU fans to finally shut the hell up. Awesome, you beat Alabama last year in Tuscaloosa? Congratulations. Auburn has done that seven out of nine times already, but you don't see us going on and on about it. Wow, you defied all those preseason expectations from last year and exceeded them. Super-duper, friend-o, I'm so happy for you, but don't get too comfortable in that winner's circle and with all the praise being heaped on your program. Why? Because in this league, the SEC, which you were so eager to jump ship for, no one wins forever, and the faster you win everything -- the faster you'll lose everything. Trust me on that one.

Well, that's it for me this week, Tiger fans. I hope you're as excited as I am for this weekend, and to those of you making your way out to the Lone Star State, welcome. I hope you enjoy your stay, and of course, War Eagle!