Wednesdays with (Oscar) Whiskey: 'ville to 'ville to victory

In this edition, Oscar looks briefly back at Arkansas and looks ahead to Tennessee.

Share All sharing options for: Wednesdays with (Oscar) Whiskey: 'ville to 'ville to victory

Well, hello there, Auburn Tiger fans. Yep, it's me, Oscar Whiskey, and things are going quite nicely for our boys in orange and blue. We know the record and the rankings, so there's no point in restating them here -- other than it makes everyone smile. 8-1 AND NINTH IN THE BCS! WOO!  OK, good to get that out of the way and to get on with this article.

You really can't ask for anything more from this Auburn team than what it accomplished up in Fayetteville this past Saturday. Sure, the run defense could have been more solid, and in fact, the Razorbacks put up the most rushing yards on this Tigers defense since the LSU game. But at the same time, this is also the first SEC game Auburn held a conference opponent to under 400 yards. The last time the Tigers did that was against Vanderbilt last year, so that's improvement, right?

I found myself becoming quite irritated with Sammie Coates when he dropped the throw from Nick Marshall on third-and-9 late in the second quarter. The play probably would have gained little yardage, but all that was needed from him was catching the ball to let the clock run out for the first half. It also wasn't as if the ball was thrown behind him or over his head. It was a catchable pass. It hit him right in the hands with enough space between himself and the nearest defenders. I was unhappy in that moment to say the least. In fact, I remained unhappy till I realized that the pass to Coates was Auburn's only incompletion in the entirety of that football game. Then I felt bad and dumb for being so harsh on poor Sammie, but then I got mad again when I figured out that Nick Marshall could have COMPLETED EVERY PASS HE THREW! COME ON SAMMIE!

The whole fake field goal/swinging gate play from Arkansas and in turn, Anthony Swain going down -- whatever, don't care. As I said last week, I don't care about Bret Bielema. Nope, I don't care that he tried to kick an onside kick early in the game. I don't care that he ran the very play he was complaining about not being on the Auburn footage the week before. I don't care that he twice tried to run a halfback pass and a reverse to try and fool Auburn's defense. All that was showing was how desperate Bielema was getting in that game, and none of it worked. The only thing I do care about, however, is if Swain was hurt, will he be good to go on Saturday against Tennessee? If he's good to go, great. If not, hurry up and get better, Anthony, the Tigers are going to need you against UGA.

I also appreciate Coach Malzahn wearing that orange sweater vest. You see, everyone, wearing orange isn't that bad. Now bring me orange jerseys and blue helmets, Gus, and you will have my undying loyalty, forever and ever. War Eagle! 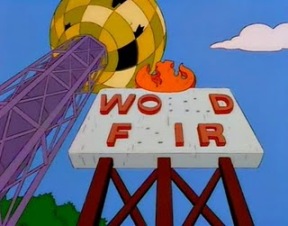 I have never been to Knoxville, Tenn.  I just haven't had that "opportunity" to go. I mean, I probably could have gone to the 2004 matchup between Auburn and Tennessee, but I didn't. I have been told that Neyland Stadium is a sight to see, and I have never been in a stadium that holds 100,000 people; it must be incredible. But other than that, I really don't think much of anything about Knoxville, other than it that Simpsons' episode when Bart, Milhouse, Nelson and Martin go there and ultimately get stranded.

However, I do know that Rajion Neal is a pretty decent running back who had a great day against a Georgia run defense that is comparable to Auburn's. I know that the Vols has 12 interceptions on the year, and yes, while five of them came in their game Western Kentucky, they did manage to snatch one apiece against South Carolina and Florida. Their other defensive stats aren't exactly great, but I am in no way going to sell them short. One thing I'm really curious about is if Volunteer fans will fill up Neyland. I know it's an early, but so was their game against the Gamecocks, when 95,736 fans showed up. And that was following their overtime loss to UGA.

I don't know what it is about this upcoming game, but I'm not feeling -- excited? That's not to downplay the Tennessee Volunteers, their football program and their fans. No, I'm just feeling -- level? Maybe because the game is so early and on the road or that Auburn has been relegated to such a time spot despite the Tigers' performance this season, that is making me feel blasé. Normally, those circumstances would have me irritated and nervous, but not so right now. It's not overconfidence that I'm experiencing, because as I said, I'm not about to sell Tennessee short. Maybe it's just right here, right now in this moment, I'm feeling this, and come Saturday, that will all change. I want Saturday to extend Auburn's winning streak against the Volunteers to six straight and be seven games ahead in the all-time series. I want Saturday to be a nice, clean execution by the offense and defense and to go home injury free. I want Saturday to be another check in the win column. I want Saturday to be that much further from 2012, and I want to take it out on Tennessee. I want Saturday because there's only three left in this season, and I want to cheer and yell for Auburn as much as I can. I want Saturday to be here -- now.