Bo Jackson took athletic stardom to a new level, and now he's trying to do the same with charity.

Bo Jackson is a larger-than-life figure, especially in the state of Alabama. A former three-sport star at Auburn and the first professional athlete to become an all-star in two major American sports, Jackson's legacy has led to the creation of some tall tales that might otherwise be reserved for characters such as Paul Bunyan or John Henry, and not a living, breathing, real-life athlete. These are the kinds of tales that only become more outrageous as the years go on, and yet, because of the subject, they're easy to believe.

One of the better stories relating to Jackson was told several years ago, well after midnight, in a seedy Birmingham bar. The individual telling the story -- his name is forgotten; it was a late night in a bar, after all -- had the appearance of a man who often found himself in dark watering holes long after nine-to-five types were in bed, and to be honest, conversation with him was a little depressing. This was a man whose claim to fame was a few summers in the early 80's spent serving as bat boy for the Birmingham Barons. He was an Alabama fan, and like many Alabama fans, he hated Bo Jackson. But, the highlight of his time as a bat boy -- at least, the way he liked to remember it -- came thanks to Bo Jackson. Bo gave him a story that he loved to tell, and judging by the theatrics that night, he had told it many times before. 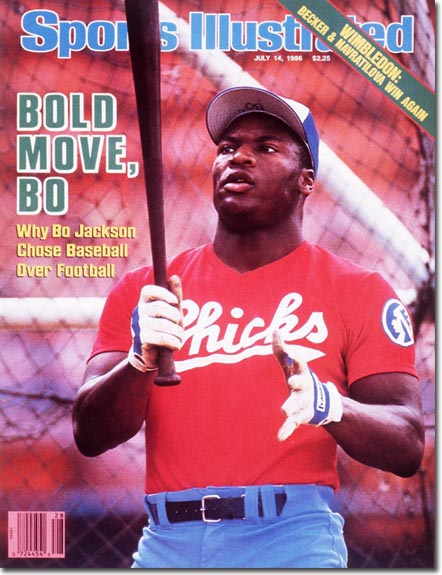 It was 1986, and Jackson was playing for the Southern League's Memphis Chicks, at the time, the Double-A affiliate of the Kansas City Royals. The Chicks were in Birmingham for a game against the Barons at Rickwood Field, which was pretty rickety in its 76th year of existence and penultimate season as home of the Birmingham ball club. According to the storyteller, leaned up against the bar and gesturing vividly throughout his yarn, Jackson stepped to the plate that day and hit a line drive so hard, it didn't clear the outfield wall, but instead went through it. It sounded ridiculous, but considering the story was about Bo Jackson, it seemed plausible.

So, was there any truth to that tale?

"I think as time goes on, people tend to stretch the truth," Jackson said in a recent telephone interview, "and I just let them have their fun."

That kind of larger-than-life image doesn't just come out of nowhere. At Auburn, Jackson was an All-American in football, baseball and track. During his career as a Tigers' running back, he compiled 4,303 rushing yards, 6.6 per carry, and 43 touchdowns. In 89 games as an Auburn outfielder, Jackson hit .335 with 28 homers, 70 RBIs and 90 runs scored. Despite his enormous success playing the team sports, Jackson preferred the man-to-man competition he found on the track, and while he wanted to continue professionally, he was a practical man.

"My favorite sport was track and field, because I was always competing against someone on an individual basis," Jackson said, "but I found out down the road that the pay scale was not that of football and baseball."

No, track and field doesn't really provide the same type of pay-out or exposure that one receives from a career in baseball or football -- or in Jackson's case, both. At best, a track athlete will win a few gold medals, become a national celebrity two or three times every four years and pick up some nice endorsement money. Now, that's not to downplay the impressive abilities of Olympic athletes, but when it comes to choosing a profession that will provide the greatest possible financial windfall and opportunity to make an impact, Major League Baseball and the National Football League are the way to go. Jackson may have enjoyed the individual competition on the track, but he was smart enough to opt for a pro career in America's favorite team sports.

Instead, Jackson went on to huge stardom, which led to one of the most memorable ad campaigns ever: "Bo Knows." That slogan has become so synonymous with Jackson, it's incredibly difficult to write about him without using it a few times -- but so far, it's been avoided.

Nike's "Bo Knows" series took athletic endorsements to another level and helped elevate sports stars to a higher celebrity status. Jackson didn't plan for "Bo Knows" to become a common household phrase, but he was aware of the opportunity it afforded him.

"We didn't know it at the time, but it just goes to show you when you have a good marketing engine behind you, like Nike, it can last almost forever, and I think I was just fortunate enough to be in the right place at the right time," Jackson said. "Marketing wasn't big back then, but it kind of set sports marketing on its ear, and after that, everyone wanted the athletes to say they were using their products. It really worked out well."

"Marketing wasn't big back then, but ('Bo Knows') kind of set sports marketing on its ear ..."

The fame and public image that professional sports and endorsements gave Jackson made him a busy man once his on-field career ended. His successful post-athletics life has been well documented, and his business ventures have kept him away from the Plains over the years. Jackson finished his degree in Family and Child Development at Auburn in 1995, but until recently, he rarely made public appearances in his college town.

"I've just been very busy with stuff going in my life, and I just haven't have time," Jackson said. "Even though I've had two kids that have gone through Auburn, I haven't had time in my schedule. In the past four and five years, I've been able to take some trips to see what's going on."

And despite his fame, Jackson's never been one to soak up the spotlight when it wasn't necessary. When visiting the Loveliest Village, he's never looking to serve himself.

"If I come to Auburn, my No. 1 goal was to see my kids, and No. 2 was to see the people that helped me through my years -- and to catch a game," he said with a chuckle. "Auburn athletics is very near and dear to my heart."

For those that share Jackson's love for Auburn sports, these are trying times. Since September, the Tigers have been pretty lousy across the board, compiling a total record of 9-35 against regular-season SEC competition in football, basketball and baseball. On the gridiron, Auburn went winless in conference play for the first time since 1950. The roundball Tigers lost 16 of their last 17 games and the baseball team is six games under .500 through 18 SEC contests so far.

Times are tough, but Jackson has hope -- at least for the football team. As a member of the three-man committee, with Pat Sullivan and Mac Crawford, that selected the Tigers' new football coach following the 2012 season he has full faith in Gus Malzahn.

"I think what's going on and being done is what's needed to be done, and that's to get new blood in there, and with a new head coach, getting the athletic program on the right level," Jackson said. "And I think that's being well taken care of."

And while Jackson fits in with the majority of Auburn fans who hold a favorable opinion of Malzahn, he breaks from the increasingly disgruntled pack with his view of athletic director Jay Jacobs. A vocal portion of the fanbase is ready to see Jacobs go, but Jackson disagrees.

If you ask someone in the anti-Jacobs camp who the new athletic director should be, you'll likely here several options. One name commonly brought up is Jackson's. That's understandable. He's an icon, an Auburn legend and has the kinds of business credentials coveted in modern-day ADs. However, he doesn't see that in the cards any time soon.

Jackson's expertise doesn't end with dominating in the arena of athletics, marketing or business. Like any good Southerner, he knows his barbecue. Born and raised in the Birmingham suburb of Bessemer, and having spent time in Memphis and Kansas City, he's had the luxury of living in three cities that pride themselves in their thriving 'Q scenes. Which locale does it best? For Jackson, nothing beats home sweet home.

"I am partial to my homegrown barbecue," he said. "Now don't get me wrong, Memphis has some good barbecue; Kansas City has some good barbecue. But some of the best barbecue in the country is in that Birmingham-Bessemer area on a Saturday afternoon when people just have their grills out in their yards, and they'll just make you a BBQ sandwich."

And which Birmingham-area barbecue establishment does Jackson prefer? Brace yourselves, Auburn fans, and try not to get your feathers ruffled.

Yes, Jackson is a fan of Dreamland, the barbecue empire that was born in Tuscaloosa and has expanded its reach across Alabama and Georgia -- even into Jordan-Hare Stadium. Auburn has a fine selection of barbecue restaurants, too -- Mike and Ed's and Byron's come to mind -- but Jackson knows a thing or two about cooking, and when he's in town, his favorite establishment isn't open to the public.

"That would have to be at my house."

These days, it's helping to take care of his fellow Alabamians that occupies much of Jackson's time. After the devastating tornadoes that leveled parts of Tuscaloosa, suburban Birmingham and Cullman on April 27, 2011, he felt a call to service. Roughly a year after the storms, Jackson hopped on a bicycle and embarked on a four-day tour throughout Alabama, cycling with other notable athletes such as Ken Griffey Jr., Scottie Pippen and Lance Armstrong -- before Armstrong fell from grace by admitting years of doping. Fans were able to take part in the rides for $200-per-day donations, and the bikes Jackson rode were auctioned for charity, too. In all, the inaugural Bo Bikes Bama raised more than $600,000 for victims of the tornadoes.

Now, he's ready to ride again. This Saturday, the two-year anniversary of the tornadoes, Jackson will lead fans on another ride. The trip will begin and end in Cordova, located in Walker County, and participants will have the option of a 20- or 60-mile loop, beginning at 6 a.m. Registration fees are $100 for the 60-mile ride and $60 for the 20-miler. There will be a silent auction Friday night, and the event is also accepting donations online or via text (50555). The ride, this year aptly known as "Bo Bikes Bama 2," is close to Jackson's heart, and he wants everyone else to realize its importance.

"We need people to support this," he said. "There's no reason people can't get out on a Saturday and support a good cause."

Jackson hopes to surpass the $1 million mark with the money raised this weekend. That's not enough to make up for all the damage suffered and lives lost two years ago, but it goes a long way toward helping to pick up the pieces.

For a man that's had incredible success and given so much to fans over the years, this is his greatest achievement.