Auburn football: What renovations could be made to improve Jordan-Hare Stadium?

Texas A&M's Kyle Field is nearing a monstrous transformation. How could Auburn improve the home of Gus Malzahn's Tigers?

Share All sharing options for: Auburn football: What renovations could be made to improve Jordan-Hare Stadium?

At the Texas A&M Board of Regents meeting on Wednesday, members were shown a video featuring renderings of proposed upgrades and expansion to the Aggies' Kyle Field. That got us thinking: What could Auburn do to make Jordan-Hare Stadium as great as it possibly could be?

Obviously, A&M is going with a massive increase in capacity, expanding from 83,002 seats to more than 102,000, which would make Kyle Field the largest stadium in the SEC. Mercy.

video and screenshot via kylefield.com

While having a huge stadium with more than 100,000 seats would be pretty awesome, it's just not something Auburn needs right now. With a capacity of 87,451, Jordan-Hare is plenty big enough, and a huge increase in seating would unfortunately too often result in large swaths of empty sections. If Gus Malzahn -- or anyone else -- turns Auburn into the kind of dominant program that wins multiple national titles and is in contention every year, then it will be time to consider a big upgrade in capacity. But right now, it's just not necessary, and that's fine.

Still, Auburn could do several things to improve the aesthetics and atmosphere in and around Jordan-Hare. A&M provided a few good ideas in the details of its expansion, and there are other other renovations the Tigers could make, too.

This is probably the best feature, other than adding roughly 20,000 seats, of the Kyle Field expansion. As far as stadium atmosphere goes, it's all about volume. The louder the stadium, the more respect it -- and the program's fans -- get. Oregon's Autzen Stadium only seats 54,000, but it's routinely hailed as one of the most intimidating venues in the country. The steep incline of the stadium's bleachers and sunken field apparently make up for the relatively small crowds.

Back in the fall of 2010, before every member of the media flung themselves into the Cam Newton allegations, national journalists talked about their love for Jordan-Hare.

I have a man-crush on Jordan Hare Stadium. Easily one of the top 5 places to watch a game.

That tweet was sent during Auburn's 24-17 win over LSU. The previous week, the Tigers defeated Arkansas at home, 65-43. After the win, ESPN's Chris Low wrote about the crowd and the part it played in the Tigers' victory:

In talking to Auburn coaches and other officials this week, they said the crowd made a huge difference in both the Clemson and South Carolina wins this season. Both times, the Tigers rallied in the second half.

Few stadiums get as loud as Jordan-Hare Stadium, which is renowned for its student section. The students have already been in the stadium for two hours, and we still have almost an hour until kickoff.

So, if Jordan-Hare is already really loud, why not make it louder? Lowering the playing field wouldn't be cheap -- hey, this is a hypothetical wish list; we're not concerned with cost -- but it would improve an already great stadium atmosphere, and it would do it without adding a single seat. If JHS provided the loudest atmosphere in the country, with not even 90,000-seat capacity, that would give Auburn fans a fine reputation.

Finish the outside of Jordan-Hare with brick

The exterior of Jordan-Hare, for the most part, looks pretty good. It's not the most beautiful stadium in the world, but it's nice -- with one exception: the Erector Set appearance outside the north end zone. It just looks like Auburn was building the stadium and either ran out of money or was too impatient to complete the brick walls around the structure. Putting brick up around the north end zone, and maybe sprucing up the old brick and adding more to areas covered in concrete, would make Jordan-Hare much more impressive to fans outside the stadium. Plus, it would allow Auburn to make the stadium fit in better to the overall architecture style of the campus, and therefore, make the stadium more "Auburn." As it stands, it feels a bit too generic.

Get rid of those damn shower curtains 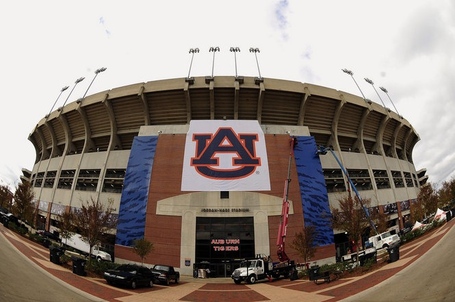 You know the ones. The tiger-striped banners that drape down the east side of the stadium just don't make any sense. They're two shades of blue, and neither one is really Auburn blue. What's worse is that they're on the same side as the new statues of Pat Sullivan, Bo Jackson, Cam Newton and John Heisman -- great upgrades to the aesthetics, by the way -- so they mar one of the best features outside JHS. You stare at them, and you wonder how in the world Auburn could have given the go-ahead on such monstrosities. Then you remember Jay Jacobs is the athletic director, so you shouldn't be surprised at bad decisions.

Seriously, please tear those things down. 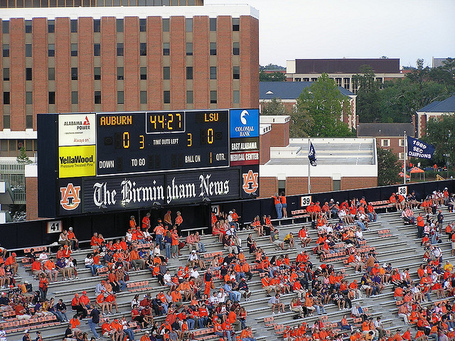 Sure, we're biased, but the south end zone scoreboard at Jordan-Hare has to be one of the best in college football. No, the jumbotron screen isn't the biggest around, but it's more than serviceable, and combined with the decorative facade, photos of Auburn legends and national championship logos, it's a thing of beauty. Even better, it's a uniquely Auburn feature. Why not give the north end zone the same treatment? It would add symmetry to the stadium's design -- although, there is something that works about its current asymmetry -- and it would keep a large number of fans from having to turn their backs to the field just to see an instant replay. They could miss a few plays if they do that with Malzahn running the offense.

These are just a few ideas, but we're certain there are more that could make Jordan-Hare better, if not necessarily bigger. What enhancements would you like to see?