Auburn football: Trying to answer the Tigers' question at quarterback

Who does Gus Malzahn need to run his offense, and who does he have?

Share All sharing options for: Auburn football: Trying to answer the Tigers' question at quarterback

Spring practice has passed us by and the long, hot, boring night of the college football offseason is here. The spring was fun while it lasted -- minus the damn pollen bloom -- and we, as Auburn fans, were privy to yet another coaching change. We got to see some familiar faces return to the Plains, as well as many new faces. Once again, Gus Malzahn’s plaid-hurry up offense took the field on A-Day, and Ellis Johnson’s ever evolving and adapting 4-2-5 defense did its best to match wits. It was fun and exciting to watch, and yours truly is doing his damnedest not to start setting lofty expectations for the upcoming season. Change is never a bad thing, but one thing seems to remain the same:

Malzahn's approach to QB battle: the earlier the better. He wants to name starter as soon as possible in August to help game plan.

So... uhh... Neither are ready. RT @aublog: If played Saturday, which QB starts: "Good thing is we don't have to play a game this Saturday."

And what does the depth chart say?

So, here we are again asking ourselves who will be taking the direct snaps in the fall. This seems like a question that has plagued the program for as far as we can remember, and most certainly over the past five years. Personally, I do find it odd that a team with three Heisman Trophy recipients, two of whom were quarterbacks, would have such a difficult time finding someone capable of playing the position consistently and effectively.* It really is more than the perceived notion that Auburn is simply "Running back U," as there have been some quality athletes that have played the position. It just has the feel that it hasn't been that often.

Like any good head coach, Malzahn is putting the best possible spin on the situation, per Brandon Marcello al.com:

"Sometimes that's not a negative," Malzahn said. "Sometimes that's a positive and you've got two guys you feel like can do it. It's a matter giving everybody a fair chance. The quarterback position is a key position. You want to make sure that once you make a decision you're 100 percent right. We'll see who gives us the best chance to win."

But Kiehl Frazier and Jonathan Wallace will not be the only ones competing for the job come the fall, as three other signees are due to arrive soon.

Every quarterback -- Frazier, Wallace, (Nick) Marshall, and freshmen Jeremy Johnson and Jason Smith -- will get a "fair chance" at earning the starting job when fall camp begins in August, Malzahn said. Burying their noses in the playbook, and participating in voluntary throwing sessions and organizing pass skeleton drills with their receivers, will help develop leadership in the summer.

Instead of looking at why Auburn has difficulty bringing in effective quarterbacks, let's look at what is needed from the current crop of signal-callers to be effective at the spot.

Since moving into the realm of college football, Malzahn has had a variety of QBs call his offense, a majority of whom were not recruited as dual-threats by their respective programs. In fact, with the exception of his time at Arkansas (as that was really just the McFadden and Jones Wildcat Showcase), four of the five quarterbacks that were starters for the entire season (2007-10, '12) that led the offense were recruited as pro-style quarterbacks. The one exception: Cam Newton.

Here's a quick profile of each QB from Rivals.com and their respective stats: 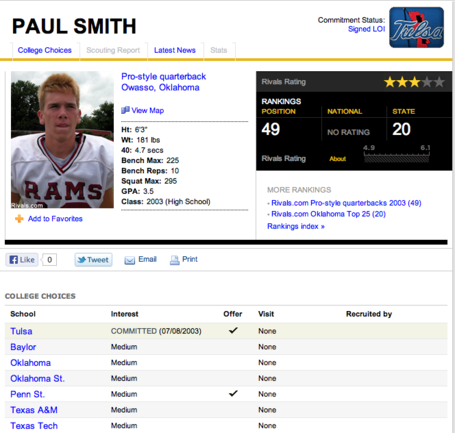 Smith was a three-star pro-style quarterback from Owasso, Okla., measuring in at 6'3, 181 pounds. He ran a 4.7-second 40-yard dash and ranked No. 49 at his position and was No. 20 in the state of Oklahoma. He received only offers from Tulsa and Penn State. When Malzahn arrived on campus with new head coach Todd Graham, Smith was a senior and had the offseason to learn the new offense. How did he do?

On top of his extremely impressive passing stats, Smith rushed for 13 touchdowns that season. It should also be noted that in 2007, Tulsa ranked first nationally in total offense and sixth in scoring offense. Auburn was 97th and 84th, respectively, that season. Oh and just for fun, Smith's Auburn counterpart, Brandon Cox**, was rated as a four-star pro-style quarterback out of high school -- and now I'm going to drink all the liquor. 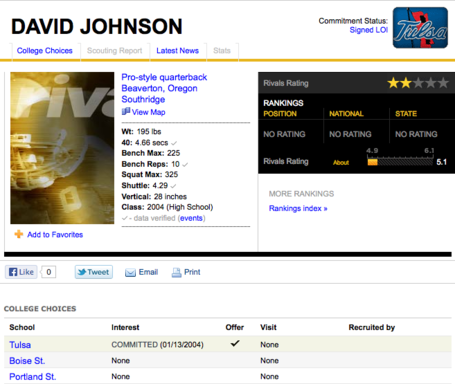 Johnson was a two star pro-style quarterback from Beaverton, Ore., measuring in at 6’2, 195 pounds, and he ran a 4.66-second 40. He was not ranked or rated in his state by Rivals, and his only offer came from Tulsa. How did he do?

While Johnson threw the ball 144 fewer times than his predecessor, his completion percentage and touchdown passes were pretty much even, but he only rushed for three touchdowns. This offense also probably came closest to Malzahn’s intention of a true balanced attack during his time with the Golden Hurricane. Tulsa finished the season yet again ranked first nationally in total offense and moved up to second in scoring. We’re not even going to bring up how bad Auburn was on offense that year. 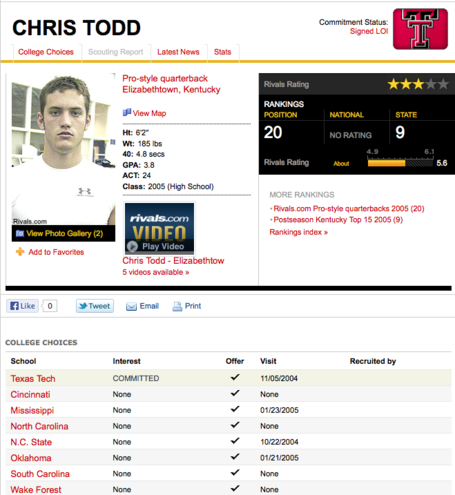 Todd's route to playing in Malzahn’s offense is slightly different from Smith’s or Johnson’s. He originally signed with Texas Tech as an air raid quarterback, listed out of high school as pro-style. He arrived in Auburn in 2008 via junior college transfer and was brought in to run Tony Franklin’s system. In 2009, he was named the starter despite spending the offseason recovering from shoulder surgery and learning the offense entirely in fall camp.

Todd’s stats were all lower than Smith's or Johnson’s, with the exception of his completion percentage and interceptions thrown. However, Todd broke Auburn’s single-season touchdown record and took the Tigers’ bottom-of-the-barrel attack to 16th nationally in total offense and seventeenth in scoring. In one season, Malzahn had worked his magic and had done so with a previously maligned quarterback.

So, here we have three quarterbacks only one of whom had familiarity with Malzahn’s offense, and none of whom were recruited to run it. In an effort to save time, length and sanity we’re going to skip writing about Cam Newton and Ryan Aplin and get to the quarterbacks Malzahn has available to him now.

As we all know, exiting this spring, the Tigers have two scholarship quarterbacks on the depth chart, Frazier and Wallace. Both are listed as dual-threat QBs, and both were recruited extensively compared to Smith, Johnson and Todd. 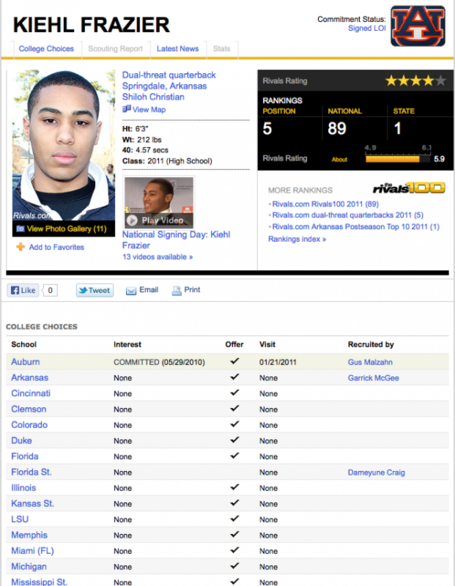 As we all know, Frazier was recruited specifically to run Malzahn’s offense, and generally speaking, he has the most experience in this system considering his high school background in Arkansas and his freshman year at Auburn. Yet despite his familiarity, his on-field performance has been absolutely atrocious. Also, of all the quarterbacks listed thus far, Frazier was the most heavily-recruited with 27 total offers, not to mention his overall position, national and in state rankings. Simply put, Frazier should be leagues ahead of Smith, Johnson or Todd.

With two years at Auburn, Kiehl Frazier has accounted for 787 yards passing with two passing touchdowns and ten interceptions. Yes, Frazier spent last season trying to play an offense he’d never played in before, but Smith, Johnson and Todd did, as well, and all three far exceeded what Frazier has done -- and then some. Before we go further, let’s look at Wallace. 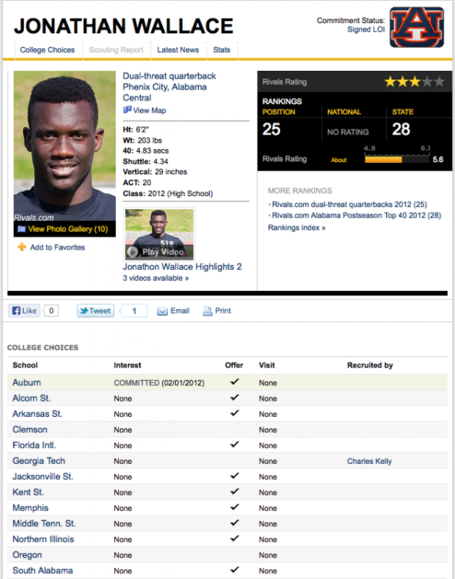 Wallace’s arrival to the Plains was much different than Frazier’s. While heavily recruited as a three-star prospect by mid-major programs, Auburn was the only major college program to extend an offer, which he signed on National Signing Day 2012. While I am certain many in Auburn fandom raised an eyebrow as to why Scot Loeffler would recruit a dual-threat quarterback into a pro-style system, we didn't think much of it. After Frazier and Clint Moseley were given a shot, Wallace finished out Auburn’s disastrous 2012 season.

Wallace would finish the season throwing four touchdowns and four interceptions. His production was still far worse in a system not tailored to his skills than that of Smith, Johnson and Todd, who, again, were in a similar situation.

With the exception of Newton, Malzahn’s offense has had great success utilizing quarterbacks who were tabbed as pro-style. While an argument could made that the level of success that Paul Smith and David Johnson experienced was because of the level of competition, it could be easily argued that higher-rated players competing against other players of their caliber in similar environments should experience a transitive amount of success. In fact, Todd alone should be evidence enough that a dual-threat quarterback is not needed to run Malzahn’s offense effectively.

What is needed to run this offense is a quarterback who can make definitive downfield reads, has the arm strength and accuracy to not just hit receivers in stride, but also to stretch the field, and when the time comes, utilize his legs to escape oncoming defenders. In addition to that, the offense needs a strong power and outside rushing attack to truly make the defense cover every single square yard on the field. Malzahn’s 2007-09 offenses had those features and then some. His current roster has one of those essential elements ... hopefully.

Malzahn’s offense, while often misconstrued as a gimmicky high school scheme, is truthfully what Auburn fans for years have come to love: three yards and a cloud of dust and an occasional good deep throw for added measure. Sure, the formations are different, and there is more motion to set up the play, but essentially, it is the same offense we've grown to love over the years. Yes, having a Newton or a Johnny Manziel are certainly tons of fun to have running the show, but guys like Smith and Johnson do just as well, if not better, than the non-superhuman duel-threat QBs. What Auburn needs more than anything right now is a guy who can step in, take the direct snap and make the right play happen.

And right now, I’m not too sure that guy is on the roster.

*I know Florida also has three Heisman trophy winners, all of whom were quarterbacks, and they’re no better off at the position than Auburn is.

**I know Cox had some physical/medical issues during his time at Auburn but still ... he was good enough to beat Florida twice, bwahahahaha, suck it Spencer!