Auburn will open the season with three straight night games

The Tigers will avoid that late August and early September heat.

Share All sharing options for: Auburn will open the season with three straight night games

The first piece of significant news from SEC Media Days 2013 is here, and it's pretty great for Auburn: The Tigers will open the season with three consecutive night games. 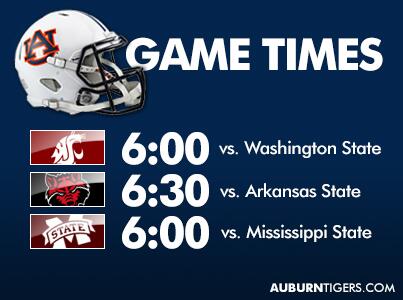 The opener against Washington State will be televised on ESPNU. Week 2 against Arkansas State will air on FSN, and the SEC opener against Mississippi State will broadcast on either ESPN, ESPN2 or ESPNU. Considering Auburn only played four night games in all of 2012, this information is just fantastic. Even if Auburn struggles in 2013, we'll have at least three great weeks of tailgating.