Auburn vs. Washington State: Breaking down the X's and O's

Both Auburn and Washington State had little offensive success last year, so they will both try to execute prolific offensive systems this season (though this is Year 2 in WSU's attempt). One spreads to run and the other spreads to pass, but expect both to put up plenty of points on game day.

Share All sharing options for: Auburn vs. Washington State: Breaking down the X's and O's

When the Washington St. Cougars visit Jordan-Hare Stadium this Saturday, Auburn will be trying to establish offensive and defensive identities against a team that was trying to do the same thing last year. Mike Leach became the head coach of WSU at the end of 2011, and by the beginning of the 2012 season, he had his famous Air Raid offense paired with an attacking 3-4 defense, coordinated by Mike Breske.

Auburn hired Gus Malzahn after last year's debacle in an effort to rekindle the magic of 2009 and 2010 (and 2011 to a lesser extent). Malzahn has been installing his famous spread-to-run, hurry-up, no-huddle (hyphen-intensive) offense paired with a flexible 4-2-5 defense run by Ellis Johnson.

So what can we expect when these teams face off?

At least we think. Conner Halliday gained plenty of experience as he and Jeff Tuel split snaps at quarterback. Since Tuel graduated, it should be Halliday's gig alone. Similarly, Carl Winston and Teondray Caldwell shared touches at running back, but only Caldwell returns. Six of the top seven most targeted receivers return, and the offensive line will be comprised of three current or former walk-ons.

On the defensive side of the ball, the top four linemen, seven of eight linebackers and six of seven defensive backs from last year will also be playing this year. Experience will certainly be improved, but unless WSU's No. 53 recruiting class (composite) can provide a spark here or there, experience might be all the Cougs have gained since last year.

Since the number of Washington State games I've watched over the years is roughly zero, I found a game I thought would show me what to expect when the Cougars play Auburn this year. I chose to watch the California game since it seemed to me Cal ran the ball more than they passed, using the zone read out of two-back formations.

In this game, neither team got off to a fast start, but eventually the Cal running game heated up. Unfortunately, Halliday didn't stay in this game long after two quick interceptions. Instead, Tuel played quarterback for most of the way. There was little chemistry between him and his receivers, and the offense never really got going, not scoring a touchdown until the middle of the third quarter.

When Auburn has the ball

Auburn's offense has a lot of formations, motions and misdirection, but really only has a few major plays. This helps the offense operate at a faster pace, while the defense is left guessing what comes next. Now when people think of Gus Malzahn and his offense, they usually think of the power running game from shotgun, but ever since his collaboration with Herb Hand at Tulsa, he has found ways to include zone runs in the offense. (Herb Hand had previously spent eight years working under Rich Rodriguez at Clemson and West Virginia. Yes, the very Rich Rodriguez credited with bringing spread-option running to the forefront of college football.)

At first glance, the inside zone just looks like each offensive linemen is simply using a drive block or just pushing his man backwards. But what if a lineman doesn't have anyone directly in front of him to push? Then he can help a teammate for a bit until he finds a linebacker to crush.

Not everyone zone blocks on a zone run. If a lineman is covered (has a defender directly over him or just to the play side), then he actually blocks man-to-man. Zone blocks are executed by uncovered linemen. In the image below, the left tackle, center and right tackle are heads up against a four tech, a zero tech (or nose tackle) and another four tech. So those linemen will drive block their assigned defenders. 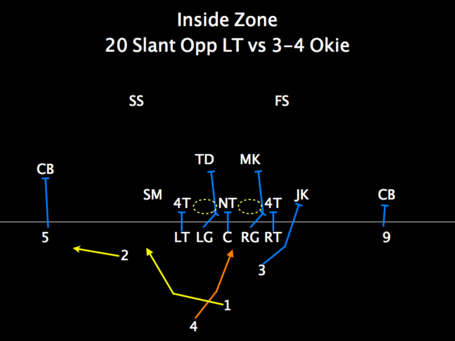 This 3-4 Okie front (a common WSU defensive front) has breaks in its defensive line called bubbles, denoted by the dashed ovals. Zone blocking comes from those bubbles, so in this case, the left guard will double-team the nose and the right guard will double team the defensive end. As soon as their block has been established, or the linebackers become a threat, one of the linemen will leave their double team and find the linebacker. In this example, the left guard finds the Ted and the right guard finds the Mike.

Note that the 2 runs a route into the flat to draw either the strong safety or Sam linebacker away from the box. If the Sam doesn't follow, he should be neutralized by the threat posed by the quarterback (No. 1). The quarterback should always execute a bootleg toward this unblocked defender just to keep him occupied.

Cal's offensive line was able to mangle Washington State's front seven with this basic play. It doesn't always look just like the diagram above (Cal regularly used a tight end), but man blocks were so good that zone blockers could almost immediately find their linebacker assignments. Watch Cal's drive that starts with 4:33 left in the first quarter to see plenty of zone runs. Keep an eye out for how quickly WSU linebackers are blocked and notice how many times a safety had to come up to make the tackle.

When Washington State has the ball

In no way could I explain the entirety of this offensive philosophy. Everything a novice like myself could want to know is located here.

The Air Raid is nearly as prevalent in today's college football as any other offense, due largely to the success Leach had at Texas Tech throughout the last decade. It can be generally categorized as a pass-first spread offense with a specific set of passing concepts that were originally taken from the pre-West Coast offenses of the NFL. These concepts include the Mesh, Cross, Wheel, All-Curl and others.

When watching the Cal-WSU game, I noticed the Cougars running Mesh over and over. In fact, their only touchdown pass of the game used this concept. 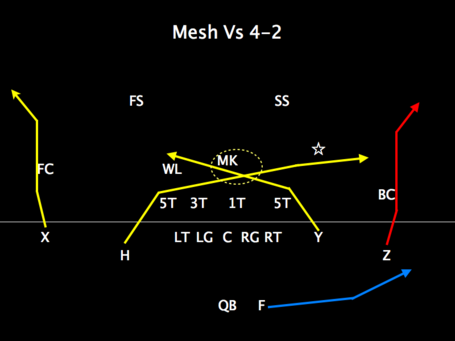 First of all, the X and Z receivers each run corner routes. If the defense presents a quick opening for either of these, the quarterback immediately goes for the homerun. In fact, when Mesh was called, Tuel usually went for the long gain, though he rarely connected.

Next comes the route combination that give this concept its name. The two inside receivers run shallow routes across the linebackers area. They get as close together as possible when they run by each other. This mesh point (the dashed circle) sets a pick rubs at least one defender off of his man. Then the quarterback just hits the open receiver. This is one reason why Auburn's weak-side linebacker, Cassanova McKinzy, has said that the the Air Raid is a "tricky offense," especially for the linebackers.

The fullback can provide extra pass protection, chip a defender on his way out of the backfield or complement the H and Z receivers by forming a triangle concept, forcing two defenders to cover three receivers. This is shown in the image below. 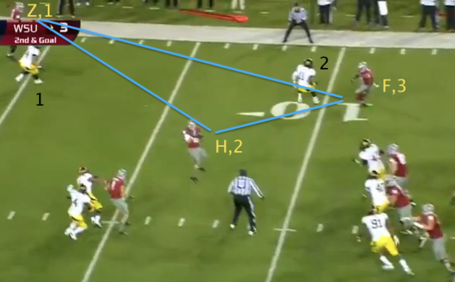