Auburn vs. Washington State preview: Time to turn the page on 2012

It's a new day, as they like to say on the Plains. Auburn needs to get off to a nice start and wash away the sour taste left over from last season.

Share All sharing options for: Auburn vs. Washington State preview: Time to turn the page on 2012

The date is Aug. 30, 2013, and the Auburn Tigers open their season Saturday night against the Washington State Cougars at Jordan-Hare Stadium. It's finally officially time to turn the page on the nightmare of 2012 and move on to better things. After the worst season in more than 60 years on the Plains, we can close the book on 2012 and genuinely look forward to Auburn football games again.

Over the last 15 years, the Tigers have had three train wreck seasons to come to come out of nowhere. After coming within one point of an SEC title in 1997, the '98 team bottomed out at 3-8 and Terry Bowden resigned/was fired in the middle of the year. In 2008, after a 42-8 record over the previous four seasons and six straight wins against hated Alabama, Tommy Tuberville lost focus, made a lazy hire at offensive coordinator and saw his team fall to 5-7, ending his 10-year stay at the school. Last season, Gene Chizik made an equally bad hire at offensive coordinator, and it resulted in a 3-9 campaign and the first winless mark in SEC play since 1950. Like Bowden and Tuberville before him, Chizik was given his walking papers. 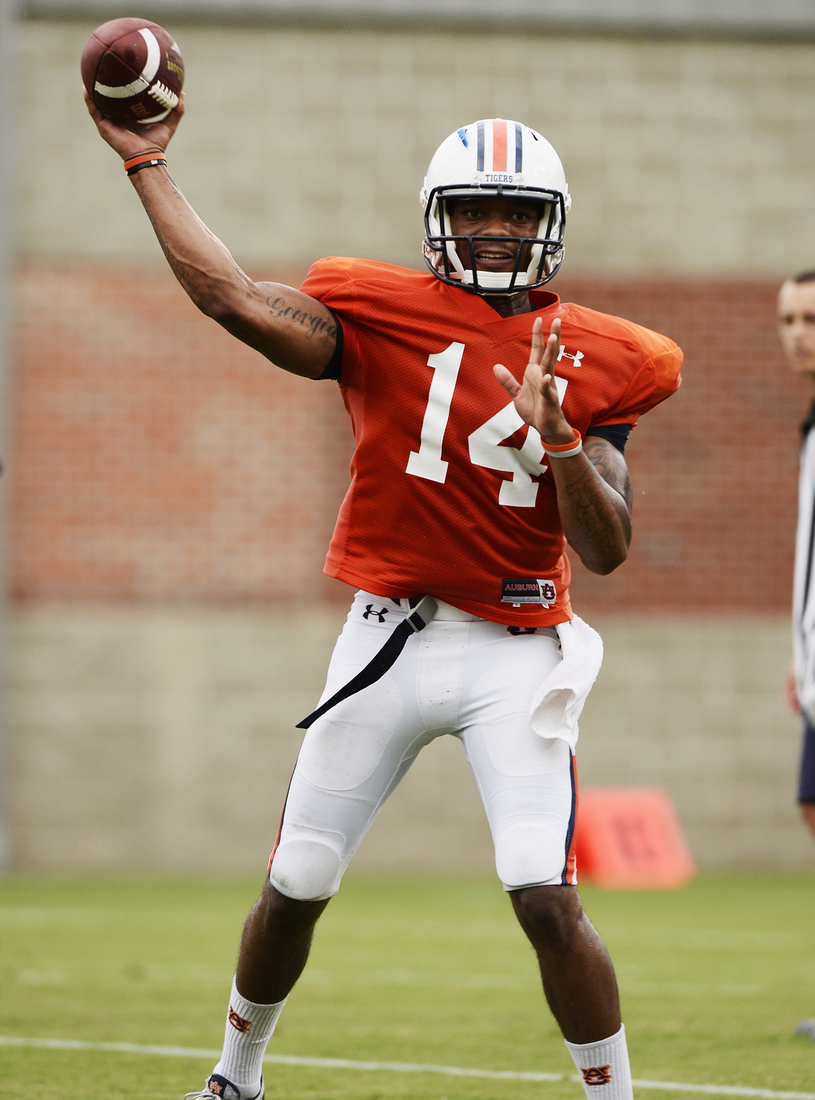 Catch up on some more of our coverage of the first game of the year.

Breaking down the X's and O's

Auburn's depth chart for the game

Now, Gus Malzahn -- oh, Gus -- returns from his home state of Arkansas to the place where he cemented his reputation as an offensive genius. Before designing the greatest offense the school has ever seen in 2010, Malzahn brought the Tigers' back from the depths in 2009, just like he'll try to do this season. In '08, Auburn ranked second-to-last in the SEC in points (17.3) and eighth in yards per game (302.3). The following year, the Tigers jumped to third with 33.3 points and second with 431.8 yards per contest. Malzahn transformed Chris Todd from an also-ran with a dead arm to the school record holder for touchdown passes in a season. It was nothing short of miraculous.

Washington State is no pushover, and the Tigers shouldn't treat it as such. The Cougars are coming off a 3-9 season of their own and have won just 12 games since the beginning of 2008. But, they're in Year 2 under head coach Mike Leach, and if nothing else, will have a dangerous arial attack to push Auburn's secondary to its limit. Wazzu had an awful record a year ago, but lost Stanford and UCLA -- two ranked teams -- by seven and eight points, respectively, and knocked off 25th-ranked Washington in the season-ending Apple Cup. No, this game isn't a gimme.

With all that in mind, here's an attempt to predict the outcome based on five pertinent questions.

1. How accurate will Nick Marshall be, and how well will he protect the ball?

Marshall is the right man for the job at quarterback, and he put up good numbers at Garden City Community College last season. Well, he put up good yardage and scoring numbers. His completion percentage (57.1) and number of turnovers (25: 20 interceptions, five lost fumbles) are quite troubling. Marshall obviously has the ability to make plays for the offense and maybe carry Auburn to an unexpected win or two, but if he's careless with the football and goes through stretches of inaccurate throwing, he could absolutely cost the Tigers a victory in any given week -- including this one.

The good news for Auburn is that Marshall hasn't given the ball away at all during fall camp -- at least according to the coaches -- and Malzahn has described him as "very accurate." Also good is that Washington State only forced 21 turnovers in 2012, second-worst in the Pac-12, although the Cougs' 15 interceptions were a little better, tying for sixth in the conference. If the running game is working well, Marshall won't be asked to throw much at all, but when he is, he can't try to force anything. And he definitely can't cough it up when he takes off running.

2. Will the secondary hold its own and make some plays?

The Wazzu passing game against Auburn's defensive backs is easily the most terrifying matchup of this one. In fact, it's really the only matchup that is all that worrisome, but that's just how scary it is: If Auburn's secondary can't get a stop, the Tigers could come up on the short end of the stick. The Cougars averaged 52 passing attempts per game in 2012 -- Auburn might go four or five games before reaching that number -- and there's no reason to believe they won't throw that much Saturday night. The Tigers' corners and safeties will have plenty of chances at interceptions.

Having a lot of chances is all fine and good, but Auburn actually has to take advantage of the opportunities. Last season, the Tigers compiled two (2) interceptions in 12 games, which, really, is pretty incredible. Senior linebacker Daren Bates picked off a pass in the opener against Clemson, and reserve safety Trent Fisher got one on homecoming against Alabama A&M, returning it 60 yards for a touchdown. But other than that, the secondary had no ability whatsoever to make a play, and that's a big reason why the Tigers had a historically terrible year instead of just a bad one.

So, Auburn has a secondary that was almost completely incompetent last season and that is dangerously thin this season. There's no doubt that Connor Halliday and his receivers will move the ball, so forcing turnovers are a must. The DBs have been saying all the right things, but until they actually produce, this is a major concern.

3. Just how many snaps will the freshmen D-linemen see, especially the ends?

Defensive ends Carl Lawson and Elijah Daniel and tackle Montravious Adams are all listed on the opening depth chart, and they should all see some time on the field, especially Lawson and Daniel. That duo is supposed to be limited to third-down rush situations, but if they get hot and Wazzu is throwing every down, they'll earn some more time on the field.

Ryan Sanders, LaDarius Owens, Nosa Egua and Kenneth Carter all have much more experience than the true freshmen, but Lawson and Daniel are a great deal more talented. It's only a matter of time before these two work their way up the depth chart, and it could happen against the Cougs.

4. Which, if any, receiver will step up and be a reliable target for Marshall?

Hopefully, Auburn won't have to throw too much against Washington State, but when Marshall does put the ball in the air, it would be nice if he could find a consistent option. As we've noted before, the Tigers have exactly zero proven options out wide, and while that might not be as big of an issue in a game that should feature a ton of running, the passing game will have to be successful for Auburn to win in SEC play.

Ricardo Louis, Sammie Coates, Jaylon Denson and Quan Bray are the most likely candidates to become the go-to receiver Denson and Bray were the most consistent wideouts in fall camp, and Louis and Coates are probably the two most talented pass catchers on the team. However, it wouldn't be a shock if either tight end C.J. Uzomah or Brandon Fulse is the primary target early on. Malzahn uses the tight end well in his scheme, and they could be a nice security blanket for Marshall if the other receivers aren't getting open early in the year.

5. How will Washington State's offensive line hold up?

If defending the pass is Auburn's biggest concern, attacking the offensive line is where the Tigers find their biggest advantage. Even though it's a night game, it will be a lot more humid at Jordan-Hare compared to what the players from the Pacific Northwest are accustomed. That will affect the big uglies in the trenches more than anyone. If the Washington State linemen aren't able to handle it, they could wilt quickly and make Halliday a sitting duck in the backfield. Oh, and three of the Cougars on the line are either current or former walk-ons, which means Auburn has a huge advantage in talent across the line of scrimmage.

This is probably where the final result will be determined. The longer Wazzu's O-linemen can play above their hands and withstand the thick air, the longer the Cougars will hang around with Auburn. Once the buckle, whether that's early, or maybe not at all, the Tigers will take control of the game. Auburn needs this to happen as early as possible.

It's the first game of the year and under a new coaching regime, Auburn has talent, and Washington State has a proven coach and an extra year in his system. It's really hard to guess how this game's going to play out. It's hard to say for certain what the Tigers will get out of Marshall, especially when he's asked to throw. Will he be accurate? Will he force passes into coverage? Will he hesitate too much and take sacks or settle for short runs a la Kiehl Frazier 2012? No one knows. We can hope for the best, but the worst is a possibility.

One of the few near certainties is that Auburn's secondary is going to have trouble with the Washington State Air Raid attack. The Cougars will probably have a few drives when they march right down the field, and they'll probably have a few big plays in the passing game.The only way for the Tigers to neutralize it will be to create some big plays of their own with interceptions. That's a must.

Fortunately for Auburn, there are a couple of other near certainties. First, the Tigers' running game shouldn't have much trouble making an impact. The offensive line should be able to play well enough, and the combination of Tre Mason, Cameron Artis-Payne, Corey Grant and Marshall in the backfield is going to do work. At least one of those players will have a 100-yard game, and it's possible another player or two could reach that plateau. Auburn may sputter a few times on offense, but the rushing attack will just be too good to be consistently shut down by Washington State's defense. When Auburn turns up the tempo late, Leach's team won't be able to get a stop.

Second, there's just no way the Cougs' offensive line can match up all night. Maybe the linemen will hold their own in the first half, and maybe they'll stay strong into the second half, but eventually the talent disparity and humidity will take their toll. Once that happens, Halliday, who isn't all that mobile, will be running for his life and the WSU passing game will be completely disjointed. And once that happens, Auburn will pull away.

It won't be pretty on defense at times, and it will probably be more nerve-wracking than most fans think going in -- the Cougars are going to move the ball and score some points. But Auburn will turn the page on 2012 and start 2013 the right way thanks to a huge running day, some good play from Lawson and Daniel and a couple of turnovers forced by the secondary. Auburn 45, Washington State 30.