Auburn lead Arkansas State the entire game, so there was no single turning point in this contest. But when Gus Malzahn commends his team for their performance on a specific drive, you know it was good. In addition, the Tiger defense was able to stop the Red Wolves on fourth down twice in the first half.

Share All sharing options for: Auburn 38, Arkansas State 9: Breaking down the key drives

This was not a back-and-forth sort of game. There was no give and take, no momentum-changing turnovers, no punches or counter-punches. After Auburn scored on its first drive, the Tigers would never relinquish their lead. After they scored on their second drive, they had scored more than Arkansas State would the entire game.

So, first of all, let's take a look at how the Tigers were able to stop the Red Wolves' second drive, keeping them from converting their first of three fourth-down attempts. Then, let's examine a drive in the second half that was just barely good enough for Gus "the Perfectionist" Malzahn. Finally, let's take a closer look at Nick Marshall's first touchdown pass as an Auburn Tiger.

Please excuse me if I don't mention an Arkansas State player by name. I'm sure you understand.

Stopping the Red Wolves on fourth down

Arkansas State knew it had to take some chances if it was going to stay with Auburn. Twice in the first half and again in the fourth quarter, it neglected relatively easy field goals and instead went for it on fourth down. Bryan Harsin's team failed all three times, but the first stop was a big boost of confidence for the Tiger defense.

The Red Wolves were able to move the ball pretty well on most of their possessions until they got close to the red zone. But they are able to do it in only two plays on this drive. Starting on their own 25 (after yet another Parkey-bomb), they reached the Auburn 29, mostly thanks to a 40-yard reception by J. D. McKissic. But the Tigers didn't allow the Red Wolves to get another first down.

David Oku rushes up the middle for 5 yards

Arkansas State runs Power O, using the H-back and backside guard as lead blockers. H-back Kenneth Rains meets linebacker Anthony Swain at the line of scrimmage and pushes him back. The left guard pulls to find the hole created by Rains. Instead, he has to take out defensive tackle Montravius Adams, who has beaten the block of both the right guard and tackle.

This leaves linebacker Kris Frost with a great shot at Oku, but he gets tangled up and is unable to wrap up. Instead, defensive end Nosa Eguae notices that he won't make an impact if keeps pressing forward, so he retreats and is actually able to stop Oku for a gain of five.

This is supposed to be a sweep to the right, but the play is blown up from the beginning. As soon as the guards pull, they are clobbered by Adams and Swain. Gabe Wright is able to beat his block and leaps to tackle Thornton for a loss.

Arkansas State receiver Julian Jones is one-on-one with cornerback Ryan White. White concedes plenty of yardage and Jones runs to the sticks and cuts out. The throw from Kennedy is fine, but it is just off target enough to pull Jones back toward the line of scrimmage. He catches the ball one yard short, so White tackles him one yard short.

David Oku rushes up the middle for -1 yard

The Red Wolves line up with two tight ends and a wide receiver, with the quarterback, fullback and tailback in classic I-formation. At the snap, the right side of the offensive line wins its battles, but the play was called to go left, and the Tigers are winning the battles on that side. 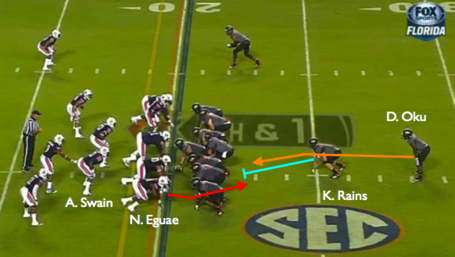 Defensive tackle Gabe Wright and linebacker Anthony Swain hold their ground at the line of scrimmage even with fullback Rains plunging into the line. Most importantly, defensive end Eguae shoves the tight end backwards and into Oku. Finally, Chris Davis and Elijah Daniel converge to finish him off. 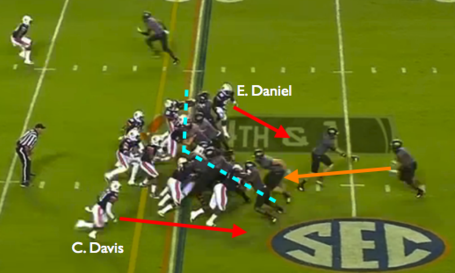 See the fourth down stop here.

"The tempo, at times, was a lot better."

After the game, Gus was asked about his offense's tempo. He replied,

"The tempo, at times, was a lot better. There was a drive going to our left that we got it going, and we ran the power and counter a couple of times. Got some momentum, scored a touchdown. I thought it was better tonight."

That drive started with 4:08 left in the third quarter. The score was 21-9, so the blowout was not yet complete. The previous two drives ended in a lost fumble and a punt after only five plays and 14 yards, so it was great to see the offense shake it off and run eight plays for 54 yards in just under three minutes.

This looks similar to play No. 2 in the Washington State game breakdown. I'm beginning to think this is a packaged play, a run-or-pass option play. Eight players execute a sweep play to the left. Both Chad Slade and Alex Kozan pull and Tre Mason runs behind them. Even receiver/tight end C. J. Uzomah blocks the first linebacker that comes his way. A run here may have gotten a few yards, but Marshall decides to throw to the other side. To the right, the remaining two players, receivers Trovon Reed and Brandon Fulse execute a simple wide receiver screen. 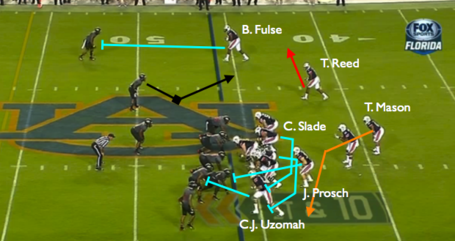 What I don't know is if Marshall is making this decision or if the decision is being made for him from the sideline. The defensive back in over Reed takes one step toward the backfield, so maybe that is all Marshall needs to pull the trigger. Either way, Reed makes one man miss and gains 7 yards. 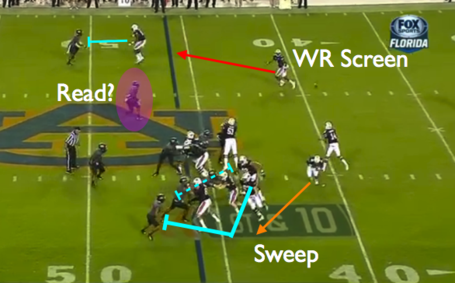 Tre Mason rushes up the middle for 11 yards

And there's the counter that Gus mentioned. One of the fundamental run plays, the counter quickly flips the strength of the formation by pulling the backside guard and either pulling the backside tackle, or, in Malzahn's offense, the H-back. This time, Slade blocks the EMLOS (end man on line of scrimmage) and Jay Prosch shoves the first defender in the way. Mason runs off of Prosch's block and gains a quick 11 yards. The first defender to hit Mason actually could have been there sooner, but he was worried about the Fulse/Reed screen again. 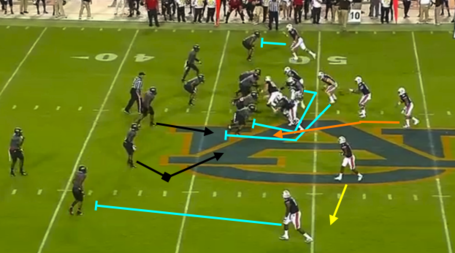 Tre Mason rushes up the middle for 29 yards

Quickly (three seconds on the game clock and about 13 seconds real time!), Auburn runs the same play. The Red Wolves bring more defenders into the box, but they don't quite get set. One linebacker is still waltzing to his position. The same blocks are made this time with one exception. Fulse and Reed have swapped places and they don't run their screen routine. They get down field and lock up defenders. Suddenly, Mason is running down the field, away from the lost linebacker and the other safety, the only two unblocked defenders. 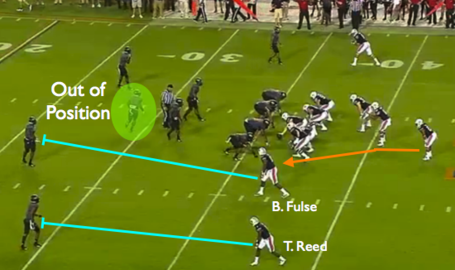 Unfortunately, a pancake block by left tackle Greg Robinson was called holding and this play was brought back. This was the only major "mistake" of the drive.

Cameron Artis-Payne rushes up the middle for 9 yards 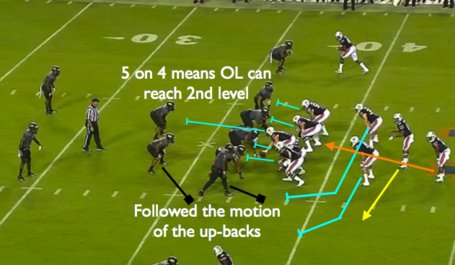 Suddenly, there are five offensive linemen to block four defensive linemen, so center Reese Dismukes immediately works up to the linebacker. However, he doesn't play it aggressively and his man makes the tackle. 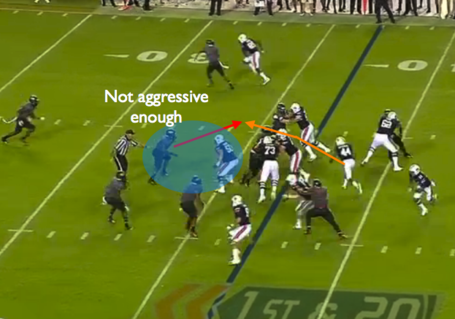 Cameron Artis-Payne rushes up the the middle for seven yards

Auburn simply runs the same play to the other side for the easy first down. Seeing it again, I notice that Marshall is executing a fake after the handoff, running behind Uzomah and Prosch. If this is a read option play, it could be deadly with Marshall running behind those two blockers.

Cameron Artis-Payne rushes up the middle for 5 yards

One more time! Finally, the Arkansas State linebackers don't react to the faux lead blockers, but they still give up 5 yards to CAP. Marshall could have kept it here, but didn't.

I don't remember seeing this inverted wishbone formation last week. But now Mississippi State and Auburn's other opponents have to spend time preparing for it. Malzahn may have just run these few plays just to give opposing coaches more to think about.

This time Auburn runs power, the other play Malzahn mentioned after the game. Power is another of the fundamental run plays. It is also similar to counter, but the backside guard and H-back essentially trade targets. Prosch kicks out the EMLOS, while Slade finds the first linebacker in the running lane and clears him out. 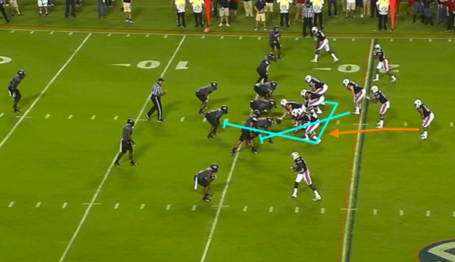 Mason patiently waits for those two blocks to develop and then hits the gap between them for five yards. Perhaps if Dismukes had seen the backside linebacker, he could have prevented the eventual tackle. 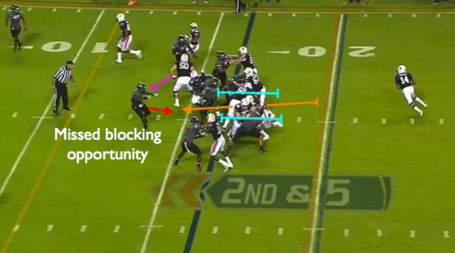 Tre Mason rushes left for 11 yards and a touchdown

This is either power or counter (both Slade and Prosch just sort of dive into the play side of the line), but with the added threat of the speed sweep by Corey Grant. 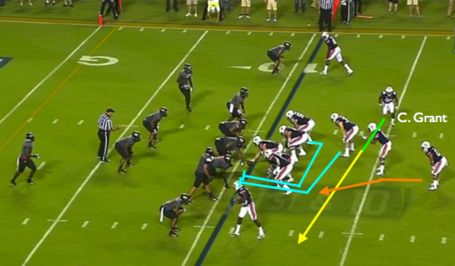 The Red Wolves do a decent job of not biting on this motion, but when Mason evades a tackle and gets outside, Grant is in perfect position to land the final block that gets Mason into the end zone. As great as Onterio McCalebb was for Auburn, I don't remember seeing him searching for that much contact. 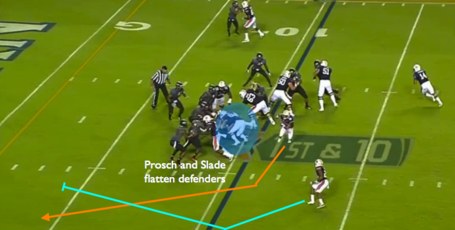 After the game, Arkansas State safety Sterling Young would explain what he saw of Auburn's first touchdown of the night.

"The blitz didn't really get there on time. We blitzed from too far back and the timing of that was wrong, and we were already playing three deep and they sent four verticals. It just put some stress on me. I could've made a better play. I kind of hesitated because I thought he overthrew it, but that's just on me. I need to do a better job."

Auburn is in the Trips formation. Arkansas State reacts with three down linemen, two linebackers on either end of the line, and a nickel back in the secondary. The Tigers run a Malzahn passing staple, Four Verticals. Simply put, the goal is to get receivers deep and then stretch the defense wide (horizontally). Along with Tre Mason, the offensive line gives Nick Marshall plenty of time, and he needs it while he waits on the all four receivers to get down the field. 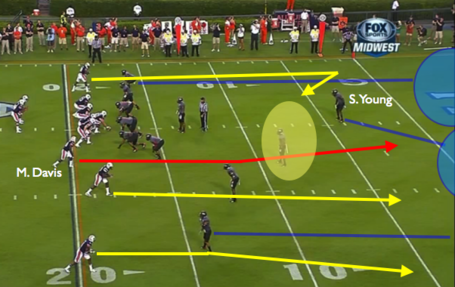 Playing Cover 3, each corner and Young, the safety, retreat deep to the end zone, keeping every receiver in front of them. But Auburn sends four receivers that deep and three can't cover four. Marcus Davis slips behind one safety and in between Young and Artez Brown (the boundary corner). As pretty a throw as this was, I bet there was an easier throw to the other half of the field, but the game film doesn't show it. Still, this play shows the arm strength and accuracy Marshall needs in the upcoming SEC games.