Auburn vs. Mississippi State: Breaking down the X's and O's

It feels like we've learned a lot about this Auburn team in just two games, but Mississippi State is still a bit of a mystery. The Bulldogs were overpowered by the read option running game of a top-15 team in Week 1, and they did the overpowering themselves in Week 2 over Alcorn State.

Share All sharing options for: Auburn vs. Mississippi State: Breaking down the X's and O's

The narrative around Mississippi State has recently changed, but the Bulldogs are still coming to Jordan-Hare Stadium this Saturday. On the field, State is trying to prove preseason prognosticators wrong by not finishing toward the bottom of the SEC West. They began their season with a neutral field contest with Oklahoma State and lost 21-3. Last week, they regrouped by pounding Alcorn State 51-7. So all we can say for sure is that State is much worse than a top-15 team and much, much better than an FCS team. (Insightful!)

Meanwhile, Auburn's defense has been a surprise so far, giving up yards in the middle of the field, but clamping down in the red zone. The Tiger offense, however, has stalled and sputtered in both games, but eventually put enough points on the board to win. It's only a matter of time until the passing game catches up with the running game and the big gains are no longer followed by penalties or tackles for loss.

This is Dan Mullen's fifth year in Starkville and, due to exceptional mediocrity, fans are beginning to wonder if the Bulldogs can do better. Despite being credited with much of Florida's success from 2005-08, State has never ranked higher than 51 in offensive S/P+. Adding to the growing impatience is the fact that, of the other SEC West teams, he has beaten only Ole Miss multiple times. His team did beat Auburn and Arkansas last year for the first time, but those were a combined 7-17 overall and 2-14 in SEC play.

On offense this year, quarterback Tyler Russell returns for his senior season, though he has missed the last five quarters of play due to a concussion. Sophomore Dak Prescott has played well enough in his place -- so well that fans are wondering if maybe he should continue to start.

Running back LaDarius Perkins is the kind of runner who can keep the football away from the opponent, but he is not a game changer. The offensive line has plenty of experience, tallying 95 total starts. But last year's top four receivers are gone, so the pass catchers are unproven, though Jameon Lewis is stepping up.

On defense, the Bulldogs are hoping a dominant unit steps up. The best talent is on the defensive line, where recruiting has brought in great players including senior Denico Autry. There is plenty of experience at linebacker, but, the talent isn't as strong there. Last year's secondary was the team's strength, led by two second-round draft picks, Darius Slay and Johnthan Banks. Replacing those two isn't easy, and even less so after losing strong safety Tony Hughes for the season due to a torn ACL.

First of all, this is a great breakdown of this game, complete with coaches' quotes, insight, story-telling and, most importantly, gifs. It focuses on the Cowboy offense's mid-game adjustment from a passing team to a running team, particularly from the inverted wishbone, or diamond formation. It is definitely worth a look.

While watching the game, I noticed that the State defense is good at making sure tackles on short throws, quickly pressuring the quarterback, and getting off wide receiver blocks trying to set a screen. However, it is pretty bad at defending read-option plays, penetrating the offensive line on run plays, and defending the pass if the quarterback has enough time.

The offense is good at providing ample time for the quarterback to throw. It is also a more balanced attack than I thought it would be. Passes are pretty common even with the score close. The running game is not spectacular, but not inept, either. Quarterback Tyler Russell is the slowest quarterback Auburn has faced so far this season. He also is a fan of the checkdown and intermediate passes. His temporary replacement, Dak Prescott, can move, making the read option a much more viable play when he is in the game. Plus, he is more of a gunslinger, always willing to throw the ball deep.

When Auburn has the ball

Auburn surprised me last Saturday when the Tigers ran three plays in a row from the diamond formation (it was used a fourth time earlier in the game). And then I remembered reading about that formation in the Mississippi State-Oklahoma State breakdown.

The Cowboys had trouble using their usual offense, but they had great success using the diamond formation. Oklahoma State ran five unique plays out of this formation for a total of 11 plays. On the other hand, Auburn only ran one play four times. I wonder if we'll see more variety in this attack this Saturday

This was the only play Auburn ran out of the diamond. The veer is an old option football staple where the offensive line blocks down (or away from the play). The end man on the line of scrimmage is left unblocked. If he stays put or widens, the ball is given to the running back up the middle. If the EMLOS crashes inside, the quarterback keeps it and goes wide.

In the diamond, if the quarterback keeps it, he has two blockers in front of him outside, just like in a sweep, but they aren't pulling guards. Instead, they are the up backs. In Auburn's case, C. J. Uzomah and Jay Prosch (play No. 4). 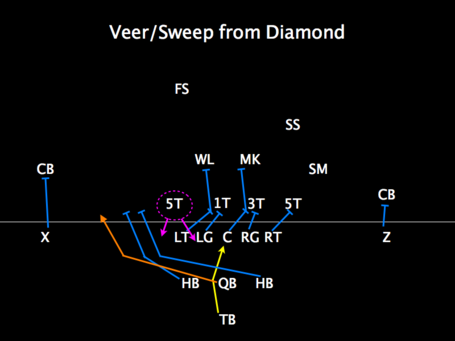 Oklahoma State ran this play multiple times against Mississippi State to great effect. It was so successful that it exposed the Bulldog defense to the rest of these plays.

Inside the 5-yard line, the Cowboys ran a bootleg pass out of the diamond. Because there was no "down field" to cover and because State's defense had just been burned for 57 yards on two plays of the veer/sweep, the defenders' positions were more compressed.

In this play, the quarterback fakes the handoff to the tailback while the offensive line executes the same down blocks. Instead of being read, the EMLOS is sealed off by the play side H-back, allowing the quarterback to sprint out. The backside H-back has also sprinted out of the backfield and he should be open for a short pass. 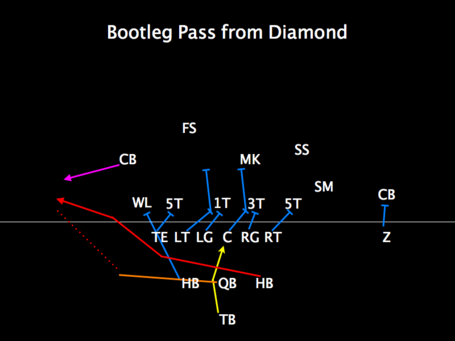 The reverse is run out of a modified diamond formation. The tailback is initially spread wide, but he sprints back to the middle of the formation as the play develops. With the quarterback in shotgun with an H-backs to either side, perhaps we should call it the double-barrel shotgun formation.

The quarterback hands the ball to the backside H-back, who would look to reach the edge behind the blocking of the other H-back if this were a run actually designed for him. But when the tailback runs behind him, he tosses the ball back and the tailback takes it the other way. Notice that the right tackle must peel from his his normal responsibility and get downfield. 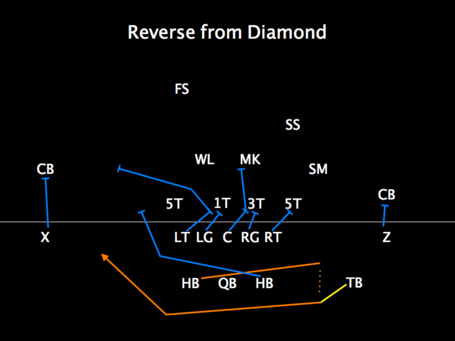 Eventually, Mississippi State responded to the long runs out the veer/sweep by putting up to nine defenders in the box. This opened up the passing game. This play sends a wide out deep on a post route, taking his defending cornerback down field. The H-back to this side runs a wheel route behind him, entering the space that was just cleared. The offensive line pass blocks and creates a typical passing pocket with help from the tailback and backside H-back. 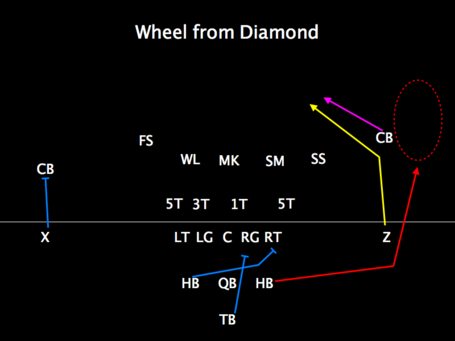 Even if there are only eight defenders in the box, the passing game is still advantageous because that only leaves the defense two corners and one safety. The safety can't provide help over top for both corners, so this play exploits that weakness. All three players in the backfield join the offensive line in providing pass protection. Then each wide receiver runs a deep out route. The corners are likely defending this conservatively, making sure the receiver doesn't beat them deep. And so, when the receiver makes his cut, he is plenty open for a pass down the field. 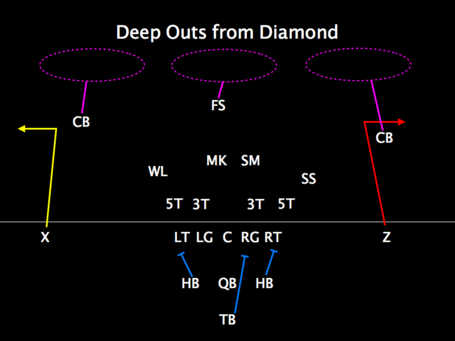 Additional plays from this formation can be found here.

It is completely possible that Auburn's use of the diamond formation last week was widow dressing. Perhaps Gus Malzahn doesn't have big plans to use it much this season. But if he does, expect to see more variety than what has been shown so far. And expect it to have success against this State defense.

When Mississippi State has the ball

I think it all depends on who the quarterback is. Granted, Mullen doesn't have a completely different playbook for each quarterback. But a good coach will certainly tailor his offense to what his players can do best.

If some Bulldog fans get their way, Prescott will see plenty of playing time. If so, expect to see extra read-option and more throws down the field. However, Russell returned to practice this week, and he seems to be in line to start. Regardless, Auburn has been preparing for both this week.

When Russell was in the game against Oklahoma State, I saw the passing game utilize some of Dan Mullen's basic route concepts, particularly H Option and Follow.

First of all, the H-back in Mullen's offense is not a Jay Prosch type. He is ideally a Percy Harvin type, a RB/WR hybrid. At Florida, H Option was a play that let Harvin, the Gators' best player, just get open. At State, the Bulldogs are lacking the same caliber of skill players, but the concept still applies.

The H-back runs up field for about seven yards while asking himself a question. "Can I get open by cutting left, cutting right, or by just stopping and turning around?" The best option is to get open toward the middle of the field, so a talented player runs the route so that his defender takes an outside position. If he must cut outside, the throw is still possible, just more difficult. And finally, if he his bracketed by two defenders to either side, he can turn the route into a hook by just stopping and turning around. 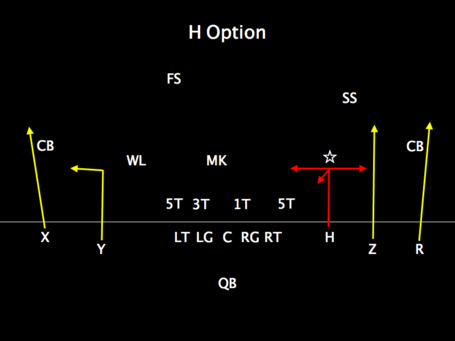 This sort of throw is perfect for Russell. It is a short throw that requires accuracy, and the ball should leave his hands quickly.

The Follow concept opens up when the H Option concept has been used effectively. To start off, the H-back no longer breaks his route at seven yards. Instead he runs down the seam (between two safeties in Cover 2) and is an immediate home run threat. But if this is properly defended, the zone he ran through has probably been abandoned.

From the backside, the inside receiver (Y receiver) runs a shallow, crossing the field only about five yards downfield. The outside receiver (X receiver) runs the deep cross route, running deeper before cutting across the formation and effectively following the Y. This X-Y pair should attack the previously abandoned zone with only one defender to cover two receivers. Finally, there could be a lot of room for the quarterback to scramble if the defense is playing man to man. 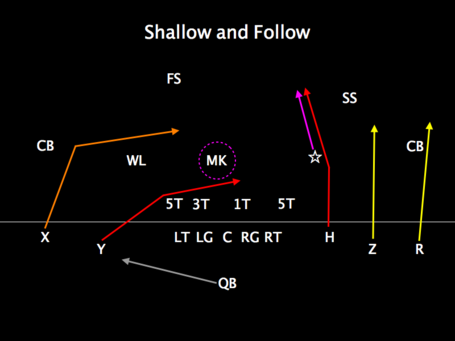 Mississippi State's offense is not nearly as talented as Florida's was in 2005-08, but the concepts used are still sound. Once again, like Washington State running Mesh, Auburn's linebackers will be tested in the passing game.