Auburn needed to gain 88 yards in less than two minutes if it wanted to win in regulation. By taking advantage of receiver-linebacker mismatches, the Tigers quickly moved into State territory. A well timed scramble and a perfectly thrown touchdown pass sealed the win.

Share All sharing options for: Auburn 24, Mississippi State 20: Breaking down THE drive

There were several things that I found interesting in Auburn's 24-20 win over Mississippi State. What is the deal with the 2-point conversions? Does the defense really play better with Kris Frost over Jake Holland in at middle linebacker? Is Kiehl Frazier suddenly a quarterback again? If so, what about Jonathan Wallace? How did the Bulldogs bottle up the running game so well?

All of that pales in comparison to the final two minutes of this game. Nick Marshall accounted for all but three of the 88 yards in a 12-play drive that won the game. He passed for 66 yards, adding 17 more with his feet, and he showed accuracy, touch and great decision-making the whole way down the field. His receivers played as well as they had all game, catching 6 of 8 passes.

Give the offensive line credit, too. Yes, the passes were quick and the no huddle slowed the defensive line, but Marshall was never even hit or hurried. And when State blitzed, Tre Mason did a fine job picking it up.

Auburn begins the drive in the spread formation, with Quan Bray at 2, Marcus Davis at 3, Mason at 4, Jaylon Denson at 5 and Sammie Coates at 9. This formation/personnel group is used for the first 10 plays of the drive.

The drive starts at the Auburn 12 and the Tigers have four receivers, but State comes out with its base 4-3 defense. The first play is a QB draw, meaning Marshall shows pass for a second and then takes off. Most of the offensive line pass blocks, but right guard Chad Slade doesn't bother. Instead, he also waits a second and then goes downfield to find a second-level block. 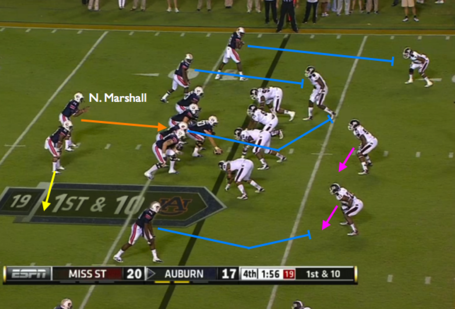 Marshall gains seven yards, but a Slade block on the Mike rather than double teaming the Will probably would have helped more. 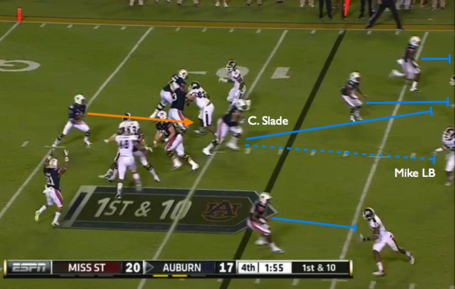 Without subbing or huddling, Auburn has State stuck with its current players. That means linebackers are covering the slot receivers. Can you say mismatch? Auburn takes full advantage for five straight plays.

This time, Coates runs a go route, taking cornerback Jamerson Love with him down the field. Davis runs a quick out, away from linebacker Deonte Skinner. Davis is faster and quicker than his defender, so Marshall is able to get him the ball. The same concept is run to the other side as well, but since Davis is to the boundary, it is the easier throw. 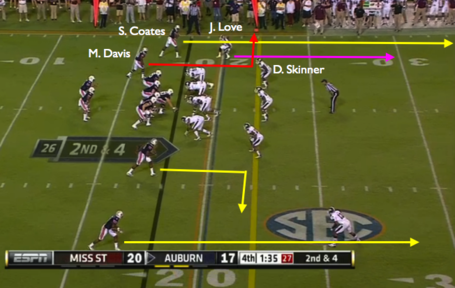 Notice the separation Davis is able get. 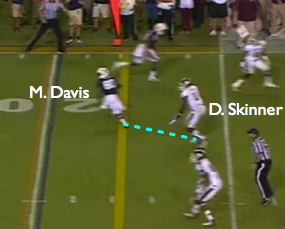 State's safeties are playing at least 15 yards away from the line of scrimmage, and I believe they back up even more once the ball is snapped. On this play, Skinner stays in his short zone and free safety Nickoe Whitley drops way back, so there is plenty of space in between. Davis finds himself open, turns around, and catches a 16-yard pass. 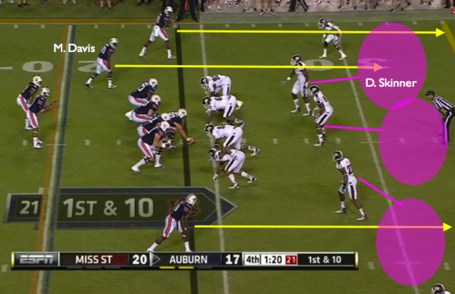 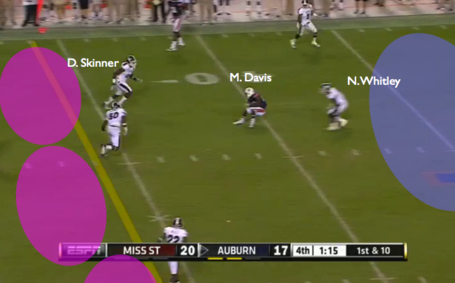 Now linebacker Skinner doesn't know what to do. He has been attacked by the same guy two different ways. Auburn goes back to the quick out and Skinner just watches the play. Only a quick reaction from Love prevents a bigger play.

Skinner practically walks toward Davis after the catch.

Auburn doesn't hurry to run the next play so the Bulldogs are able to change up their personnel. But instead of bringing in another defensive back, they replace a lineman with Zach Jackson, another linebacker. State shifts to a three-man front, probably hoping to confuse Marshall and the line by making them guess where the fourth rusher is coming from.

On this play, though, the Bulldogs only rush three. This gives Marshall plenty of time to let the Switch concept develop. I can't actually see the receivers run their routes, but Denson is lined up inside with Bray lined up outside. 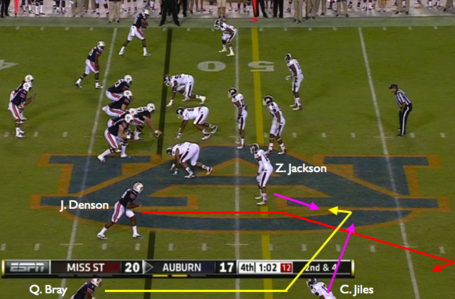 When they reappear on the screen, Bray has taken an inside route, luring both Jackson and cornerback Cedric Jiles. Like Davis on his second reception, Denson just stops and turns around for the catch between the short and deep zones.

With the ball on the right hash, Auburn's formation flips. Matthew Wells (normally the middle LB) is lined up with Davis on the right side. Auburn goes back to the quick out and Davis makes another linebacker pay, beating Wells for a nine-yard reception.

Now inside field goal range, State shifts back to its standard 4-3 defense. It turns out the Bulldogs don't have much depth at cornerback, so using linebackers in coverage is the Bullies' best shot. Auburn runs another QB draw, but all five lineman stay back. 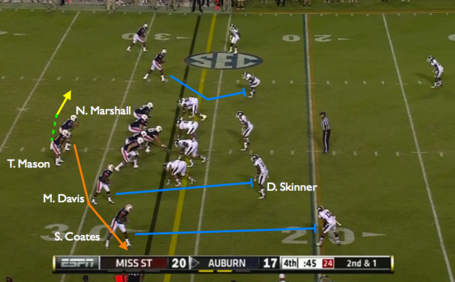 That's unfortunate because Davis whiffs on his block of linebacker Skinner, who forces Marshall to run to the sideline rather than down field. The cornerback comes up to force him out of bounds, but not before Marshall gains a first down. 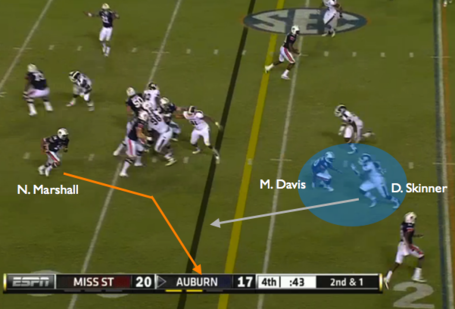 The Bulldogs bring a blitz from the right side and Davis reads it perfectly. Making his hot read, he breaks his route off short and turns around in the area the blitzer came from.

Coates is also open, running a deep hook in front of the deep zone coverage of the cornerback. Marshall makes the longer attempt to Coates, but perhaps the blitz makes him uncomfortable and his throw is a little off target. Coates gets one hand on it, but he can't haul it in. 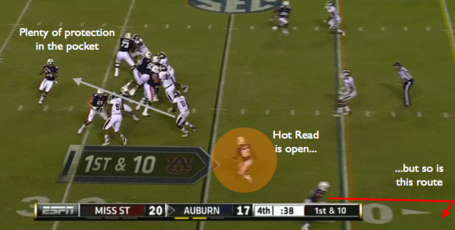 Auburn goes back to the quick out, and, what do you know, Davis beats Skinner again. But he can't hold on the ball, and suddenly it's 3rd and 10.

State replaces a lineman with a linebacker again and brings their strong safety down, showing a single high safety. A linebacker is showing blitz on either side of the defensive line. At the snap, both the left linebacker and the Mike blitz while the right linebacker drops into a zone. 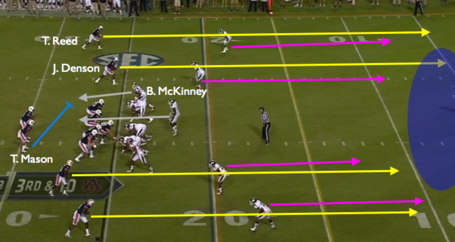 Mason picks up his block on Benardrick McKinney and Trovon Reed and Denson have taken their defenders down field. No one is left on that side of the field, and Marshall takes off. Wells and Whitley are able to chase him down, but only after a gain of 11 yards and a first down. 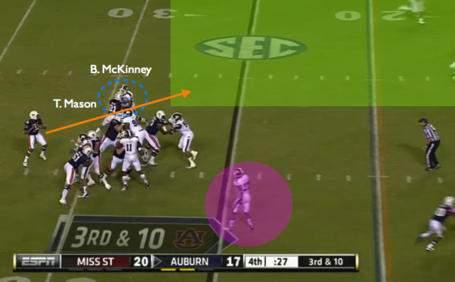 Auburn changes formation for the first time in this drive, showing the Stack Twins formation. Auburn also changes its personnel for the first time in this drive. H-back Jay Prosch is brought in for Marcus Davis, probably because of Davis' inexperienced blocking. (You sometimes hear about young running backs that can't stay on the field because they can't provide pass protection. I bet Malzahn feels the same way about receivers who can't block too well.)

The Tigers run a draw with Marshall showing pass and then handing it off to Mason. A few things work well for Auburn on this play. First, State's free safety, Whitley, blitzes from the opposite side of the run, so he is no factor in this play. Second, the passing look brings defensive end Preston Smith way up field, effectively taking him out of the play, as well. Only an excellent tackle by safety Kendrick Market saves a big play, possibly a touchdown. 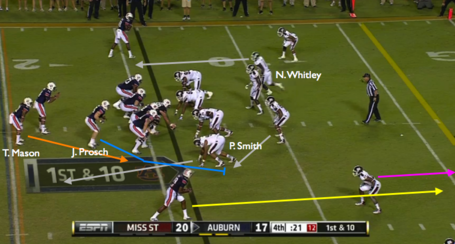 After a timeout, Auburn changes its formation and personnel for the second play in a row. The Tigers show Slant Opposite Twins, but Brandon Fulse replaces Denson and moves to a traditional tight end spot. Reed comes in for Bray as the flanker to the field, and C.J. Uzomah replaces Coates as the split end.

State shows eight in the box, four lineman and three linebackers with one safety. The field corner is playing off of Reed, the boundary corner is playing bump and run on Uzomah and the free safety is splitting the difference. 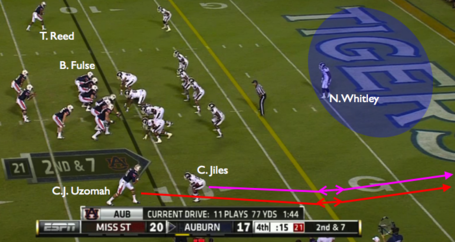 At the snap, Marshall does a great job of keeping his eyes down the middle of the field, not tipping his hand too early. Safety Whitley actually takes a step toward the field before Marshall suddenly is eying his target to the boundary. Here's video of the play from a different perspective. You can really see Whitley's big step to his right.

With the Marshall pump fake and Uzomah turn around, cornerback Cedric Jiles jumps all over the route, and this is why Uzomah was in over Coates. Uzomah uses his 258-pound frame to muscle past Jiles and 6'4 height to reach the ball.

Marshall throws a perfect ball into the corner of the end zone. Not so fast that his receiver can't handle it. Not so low that it gets batted at the line of scrimmage. And not so soft that either Jiles or Whitley can recover to break it up.